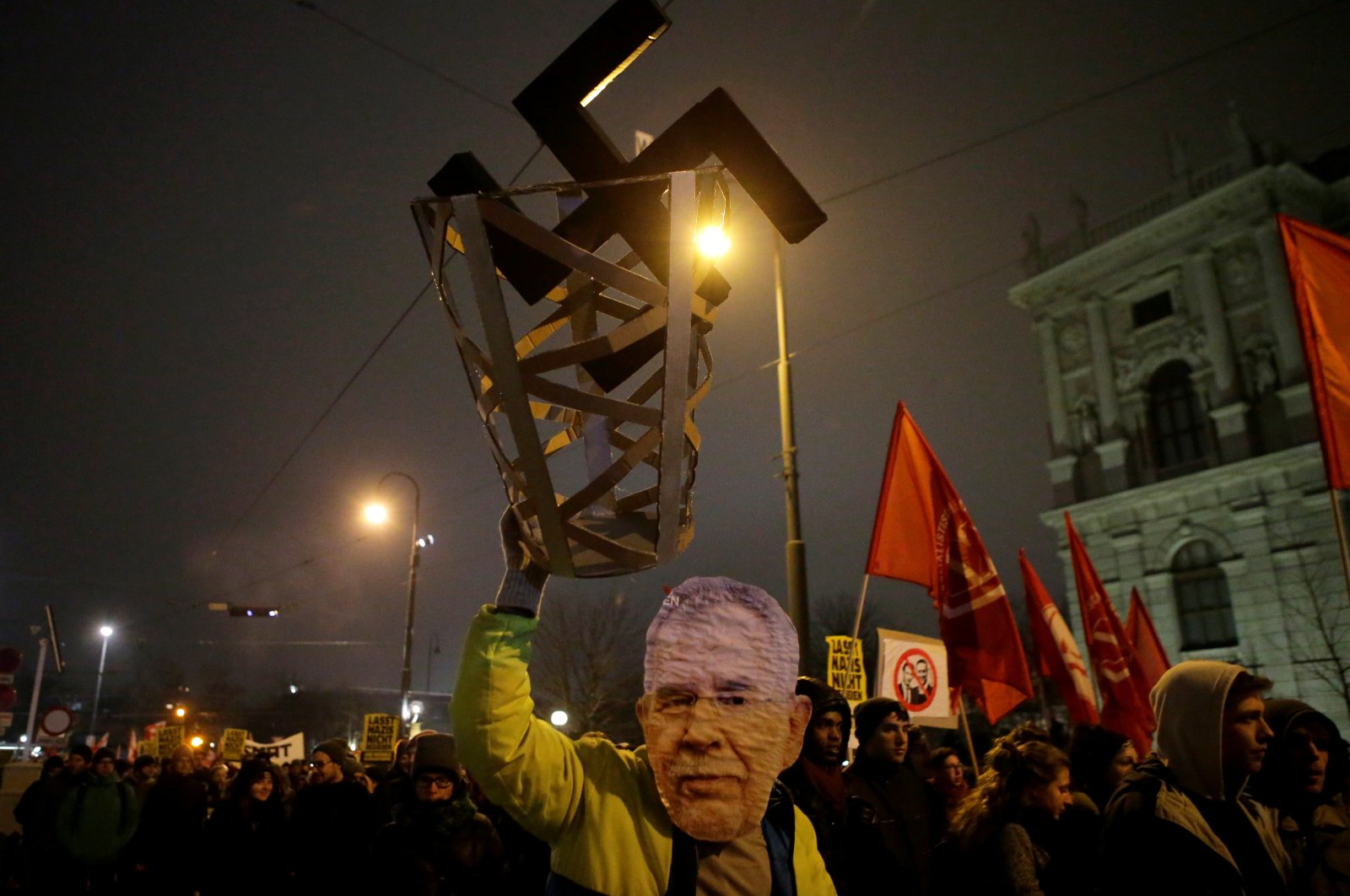 A protester wearing a President Alexander Van der Bellen mask holds a swastika in a basket during a demonstration against the far-right Freedom Party's annual Academics' Ball in Vienna, Austria, Jan. 26, 2018. (Reuters Photo)
by DAILY SABAH Mar 03, 2021 11:39 am
RECOMMENDED

Alexander Pollak, the spokesperson for SOS Mitmensch, said in a video conference that anti-Muslim rhetoric and campaigns by political parties and individuals reached an unprecedented level in 2020.

He noted that rhetoric by prominent politicians is a determinant factor on Muslim perception by the Austrian public.

Pollak added that a recent survey showed that 35% of the public has a negative opinion about Muslims, while 40% support the idea that Muslims should not have equal rights with Austrians.

The Austrian government had prepared a controversial "anti-terror" law in late 2020 having anti-Islam motives, however, it was later revised by using the phrase "religiously motivated extremism" instead of "political Islam."

The government also adopted a bill preventing girls younger than 10 from wearing the headscarf in 2019, which had been challenged by two children and their parents. The measure was passed in May 2019 under the previous coalition of the center-right People's Party (OeVP) and the far-right Freedom Party (FPOe), just days before that government collapsed due to a corruption scandal.

However, Austria's constitutional court in December struck down a law introduced last year which banned the headscarf in primary schools, saying the measure was unconstitutional and discriminatory.

Speaking in the video conference, Judith Kohlenberger, an Austrian academic, said that the COVID-19 pandemic was instrumentalized to discriminate against Muslims and to strengthen conspiracies against Islamic groups.

She said that Muslims were targeted with claims such as Balkan immigrants that return from their homeland bring increases in daily COVID-19 cases or Turks do not abide by measures during weddings.

The Turkish community in Europe is concerned with the rising trend of Islamophobia and Turkophobia in Western countries, calling on European states to escalate measures against hate crimes. In Germany, there were 122 attacks on mosques in 2020 alone. A significant amount of these were attributed to politically motivated crimes by the far-right.

Turkish officials have frequently urged European decision-makers and politicians to take a stance against racism and other types of discrimination that have threatened the lives of millions of people living within the bloc’s borders.