Armenian damage in Nagorno-Karabakh reveals itself in cemeteries 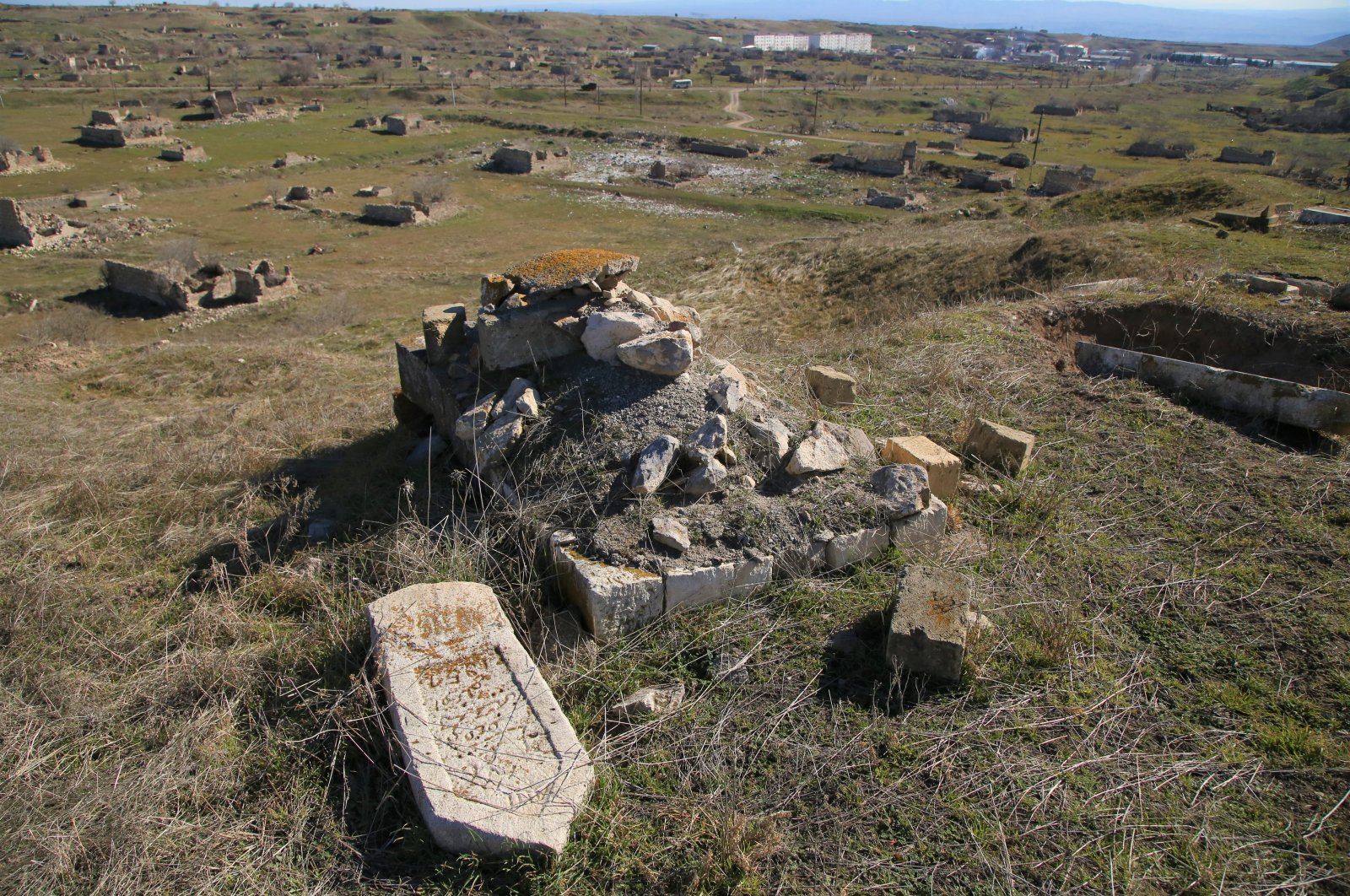 The scene of damaged graveyards in Jabrayil cemetery in Nagorno-Karabakh, Azerbaijan, Feb.23, 2021. (AA)
by DAILY SABAH WITH AGENCIES Feb 23, 2021 11:49 am
RECOMMENDED

The cemeteries in Nagorno-Karabakh have revealed the violent face of the Armenian occupation as the returning Azerbaijanis are shocked by the damage to their loved ones' graveyards.

The damage became more apparent following the liberation of the region by Azerbaijani forces, which led to the return of the displaced Azerbaijanis to Nagorno-Karabakh. Welcomed by "ghost towns," which were ruined and turned into piles of stones, Azerbaijanis were most upset by the wrecked cemeteries since the graveyards have become unrecognizable, causing many people to fail to find their loved ones' burial sites.

For instance, in Jabrayil, which is one of the main cities in Nagorno-Karabakh, there are almost no graveyards that remain intact. Some of the graveyards in the city are even being dug out, revealing the bones of the dead.

Speaking to Anadolu Agency (AA) on the issue, Azerbaijani presidential aide Hikmet Hajiyev said that the cemeteries had faced "vandalism" during the 30-year occupation.

"I cannot find words to describe their fight against the cemeteries, their ruining of the cemeteries. It is as if they tried to take revenge on the dead. This is the most gruesome way of vandalism. The international community should see this brutality that Armenia caused for years," Hajiyev expressed. Relations between the former Soviet republics of Azerbaijan and Armenia have been tense since 1991 when the Armenian military occupied Nagorno-Karabakh, a territory recognized as part of Azerbaijan, and seven adjacent regions.

The ex-Soviet rivals signed a Moscow-brokered peace deal on Nov. 9, 2020, ending weeks of heavy fighting, and documenting that Armenia will surrender several territories to Baku.

Still, both sides accuse each other of crimes against humanity.

Last month, Azerbaijan applied to the European Court of Human Rights (ECtHR), suing Armenia for its human rights violations during its 30-year occupation of the Nagorno-Karabakh region. Underlining that Article 33 of the European Convention on Human Rights allows states to file against another state, the statement expressed that Azerbaijan submitted its complaints about Armenia in three different sections. The statement gave the example of internally displaced people (IDPs) who were "prevented from accessing their homes, visiting places of worship and paying respect to those buried in the formerly occupied territories." Since July 2020, 101 Azerbaijani civilians have been killed, including 28 women and 12 children; 423 were wounded, including 104 women and 51 children; and 9,294 homes were destroyed or significantly damaged, the statement underscored.

On Monday, Armenia and Azerbaijan renewed accusations in addresses to the United Nations Human Rights Council that the other side committed war crimes during their fighting over the Nagorno-Karabakh region.

The decadeslong dispute reignited into an all-out war in late September and claimed some 6,000 lives, including civilians. It ended with Armenia's brutal defeat six weeks later following a Moscow-brokered peace deal.

Both sides accused the other of violating international law during the fighting and lobbed the claims again Monday when their foreign ministers addressed the Geneva-based U.N. Human Rights Council by video link.

He added that Baku's leadership, "with the direct involvement of Turkey and the latter's affiliated foreign terrorist fighters, perpetrated mass atrocities against Armenians."

In December, Amnesty International urged Baku and Yerevan to urgently probe "war crimes" committed by both sides during the fighting.

While Armenia has not opened an investigation into its army for war crimes, Azerbaijan has charged two of its soldiers for mutilating the bodies of Armenian soldiers.