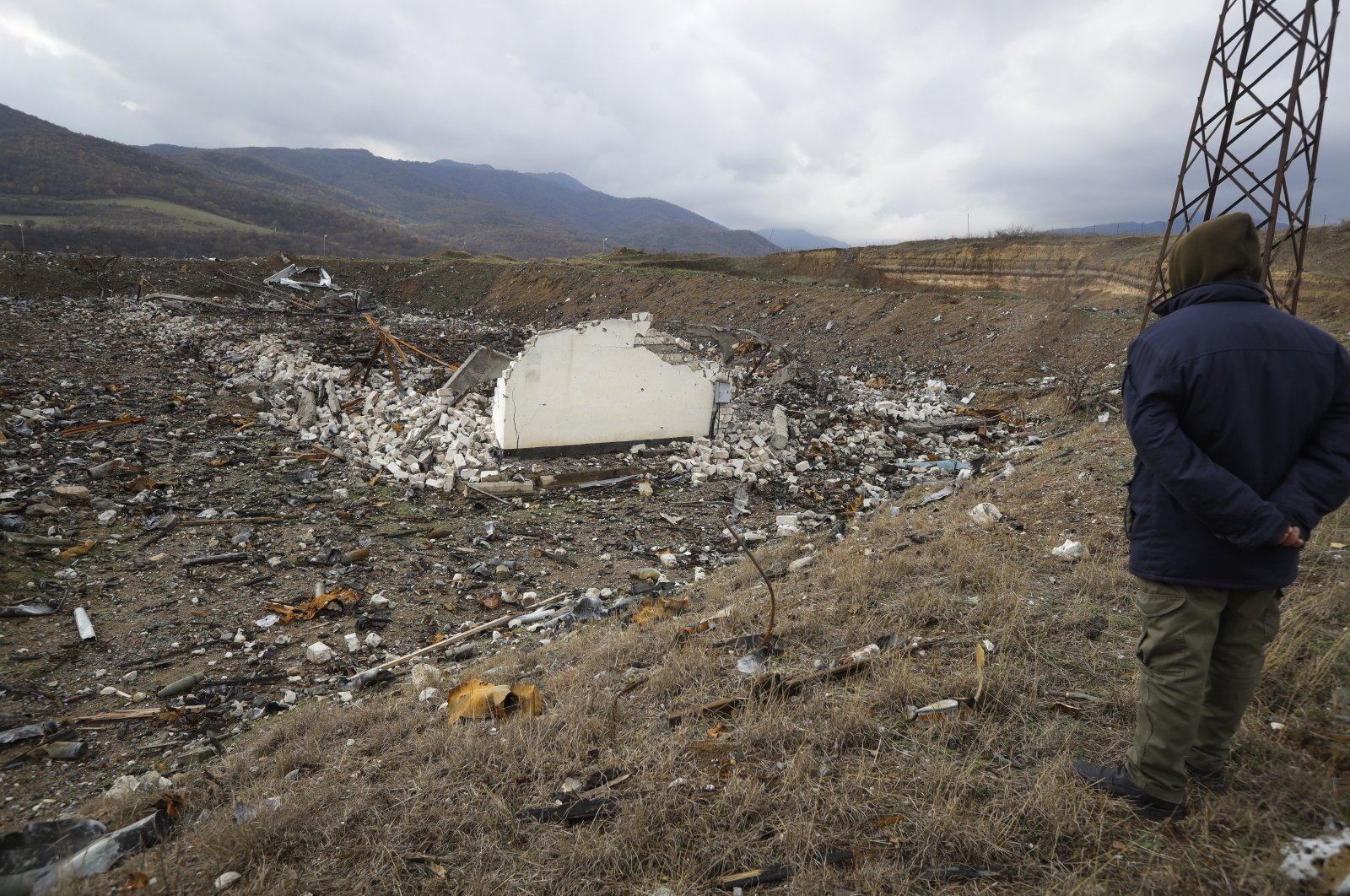 A member of a survey team from the Halo Trust mine-clearing organization looks on at a damaged ammunition store near the outskirts of the capital Stepanakert (Khankendi) of Nagorno-Karabakh, Azerbaijan, Nov. 23, 2020. (AP File Photo)
by DAILY SABAH Feb 12, 2021 12:20 pm

Landmines planted by Armenian forces continue to threaten the lives of civilians and soldiers in the Nagorno-Karabakh area, as Yerevan refuses to share details about the locations of explosives

Dozens of residents in Nagorno-Karabakh have been killed by land mines planted by Armenian forces, even though three months have passed since the cease-fire was established, Azerbaijani authorities said in a statement Friday.

“People in Nagorno-Karabakh continue to be killed by an unknown number of land mines that were buried by Armenian troops throughout the territory,” authorities said, adding that President Ilham Aliyev urged citizens to refrain from traveling to the liberated areas without permission.

“I understand the wishes of those who have longed for their homeland for many years. Every former internally displaced person wants to return to his native village. But I must ask that they wait a bit longer until our work to clear the mines is completed,” Aliyev told Azerbaijanis yearning to go back to their homes after liberation.

The statement noted that the Armenian side refuses to submit the mine map, despite requests.

“Clearing the unexploded ordnance is estimated to take five or six years, while clearing mines could take even longer, between 10 to 13 years,” the statement said, adding that although Azerbaijan has been carrying out operations to clear the mines, casualties have been unavoidable.

On Nov. 23, an Azerbaijani soldier was killed, and a Russian peacekeeper and four Ministry of Emergency Situations of Nagorno-Karabakh workers were injured in an explosion near the village of Madagiz while searching for bodies of individuals killed in the war. Just five days after the incident, four more people were killed after their vehicle was blown up by an anti-tank mine in Fuzuli. In three separate incidents in December, five more people, including two Azerbaijani soldiers, a Russian officer and two civilians were killed in explosions. On New Year’s Day, another Azerbaijani civilian died in Fuzuli, while an officer was killed after a mine exploded in Qubadli on Jan. 12. Just two days after this, the driver of a bulldozer died after driving over an anti-tank mine near Talish, and a similar incident occurred on Jan. 22 in Jabrayil.

Land mines kill and injure around 20,000 people in 75 countries across the world, according to the United Nations.

The Turkish military has also provided help to Azerbaijan and sent a squad of Special Mine Detection and Clearance Team (OMAT) members to clear areas of Nagorno-Karabakh of mines following its liberation from Armenian occupation.

Turkey also established a joint observation center with Russia to monitor the cease-fire following the conflict in Nagorno-Karabakh.

The center, which both countries agreed to set up in November, officially opened in the Agdam region of Azerbaijan. Both Turkey and Russia will send up to 60 personnel each to run the center.

Apart from clearing the mines, Azerbaijan also kicked off the efforts to come up with plans and projects for the region while determining the damage and its costs to the region as well. The Azerbaijani government plans to carry the issue to the international courts once it is able to assess the overall damage in the region caused by the Armenian forces.

“Smart city” and “smart village” concepts will constitute the basis of the planned construction, while the rich water resources and sun and wind energy potential of the region will be utilized under the concept of a “green energy” region.

The first project of the region, which is to build a new road from Fuzuli to Shusha, has already started, among others such as laying a foundation for the Fuzuli International Airport.