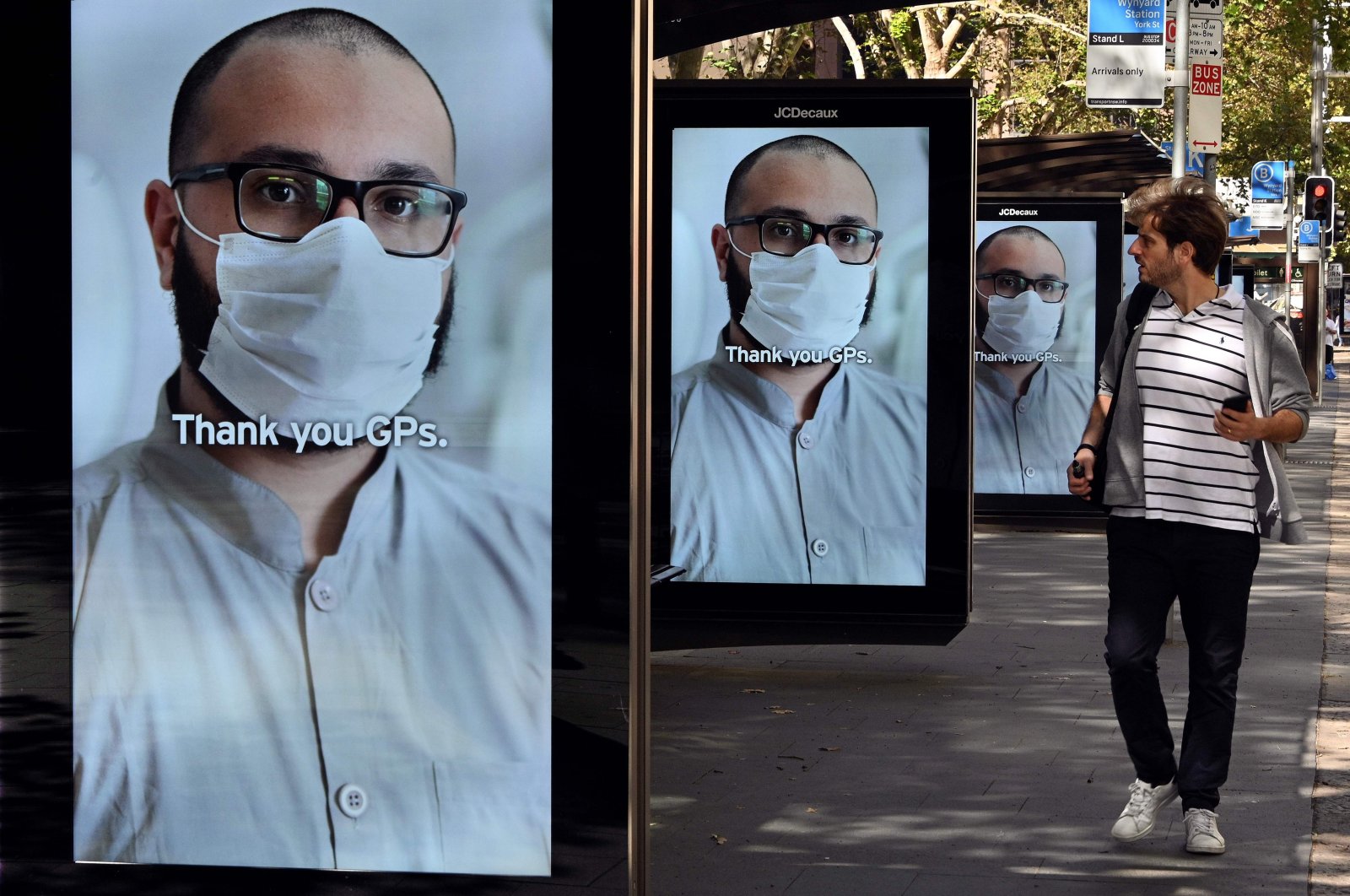 A man walks past bus stop advertising boards displaying thank you messages to health workers in response to the COVID-19 coronavirus outbreak, in Sydney on April 15, 2020. (AFP Photo)
by Agencies Apr 17, 2020 10:31 am
RECOMMENDED

Australians were strongly urged to sign up for a controversial mobile phone app that will track their movements, as officials warned on Friday that public life could be constrained for another year because of the coronavirus pandemic.

Prime Minister Scott Morrison said downloading the smartphone software, which has been criticized by civil liberties groups as an invasion of privacy, would initially be voluntary.

However, he declined to rule out making use of the "TraceTogether" app compulsory, stressing the ability to detect potential new outbreaks would be a key part of giving officials the confidence to begin winding back strict social distancing measures.

"I will be calling on Australians to do it, frankly, as a matter of national service," Morrison told radio station Triple M.

"This would be something they might not normally do in an ordinary time, but this is not an ordinary time. If you download this app, you’ll be helping to save someone's life," he said.

The government is planning to roll out the app within the next two weeks after finalizing legal issues around privacy, Morrison said.

Australia has so far avoided the high numbers of coronavirus casualties reported around the world after closing its borders and imposing restrictions on public movement.

Restaurants, bars and other "nonessential" businesses have closed, and public gatherings of more than two people are banned under the threat of fines and even prison, measures that are expected to double the unemployment rate by mid-year.

The daily growth rate of reported new infections has steadied in the low percentage single digits, or fewer than 50 per day, from about 25% several weeks ago. The country's most populous states reported 43 new cases on Friday, taking the total to 6,522, while the death toll rose by two to 65.

Morrison said this week that all social distancing measures will remain in place for at least another four weeks, and some would likely remain for up to a year.

Any easing of the current limitations would not occur until Australia has increased testing capacity, strengthened contact tracing and readied local responses for further outbreaks, he said.

The smartphone app would be key to improving contact tracing by detecting whether people had spent more than 15 minutes with others who may have been infected.

Australia's Deputy Chief Medical Officer Paul Kelly said at least 40% of people would need to be signed up to make it effective.

The TraceTogether app has been available in Singapore since March 20, but its success has been limited with less than one in five downloading the app, the city state's government said earlier this month.

Italy also plans to use a smartphone app developed by tech startup Bending Spoons to track people who test positive for the coronavirus as part of efforts to lift its nationwide lockdown.

As the original epicenter of the virus outbreak in Europe, Italy has the world's highest coronavirus death toll with more than 22,000 fatalities, second only to the United States.

Though the government last week extended the national lockdown until May 3, it is looking at ways of loosening the draconian restrictions imposed more than a month ago to curb the epidemic.

"We are working to test a contact-tracing app in some Italian regions," Domenico Arcuri, the government's special commissioner for the coronavirus emergency, told state broadcaster RAI late Thursday.

Smartphone apps and other technology have been widely used in Asian countries such as Singapore and South Korea to help rein in contagion, but there have been deep misgivings in Europe over the potential for data abuse and privacy violations.

Arcuri said the aim is to make the app available to the entire country after the regional testing.

"It will be a pillar of our strategy to deal with the post-emergency phase," Arcuri said.

Italy's Ministry of Innovation Technology launched a tender last month for app developers volunteering their services. It received hundreds of proposals, from which a special committee selected the Bending Spoons product, a decree from the special commissioner showed.

The PEPP-PT is promoting a European platform to allow national contact-tracing apps "talk" to each other across borders.

The Bending Spoons application, initially named Immuni, uses Bluetooth technology to record when users are in close proximity with each other, people with knowledge of the matter said.

If someone tests positive for the coronavirus, the app could send an alert to users who have been in contact with the infected individual, recommending actions such as self-quarantine and virus testing while preserving anonymity.

Advocates of Bluetooth technology say this method is a more accurate and less intrusive way to log proximity and the length of contact than location-tracking based on networks or satellites, which have been used in some Asian countries.

Arcuri said the app will be used voluntarily, in line with recommendations by Italy's data protection authority and European privacy rules.

"But we hope our citizens will adopt it massively, as their support is needed to make a contact-tracing system work," he added.

Experts say the app would need to be downloaded by at least 60% of the population to help to achieve so-called digital herd immunity.