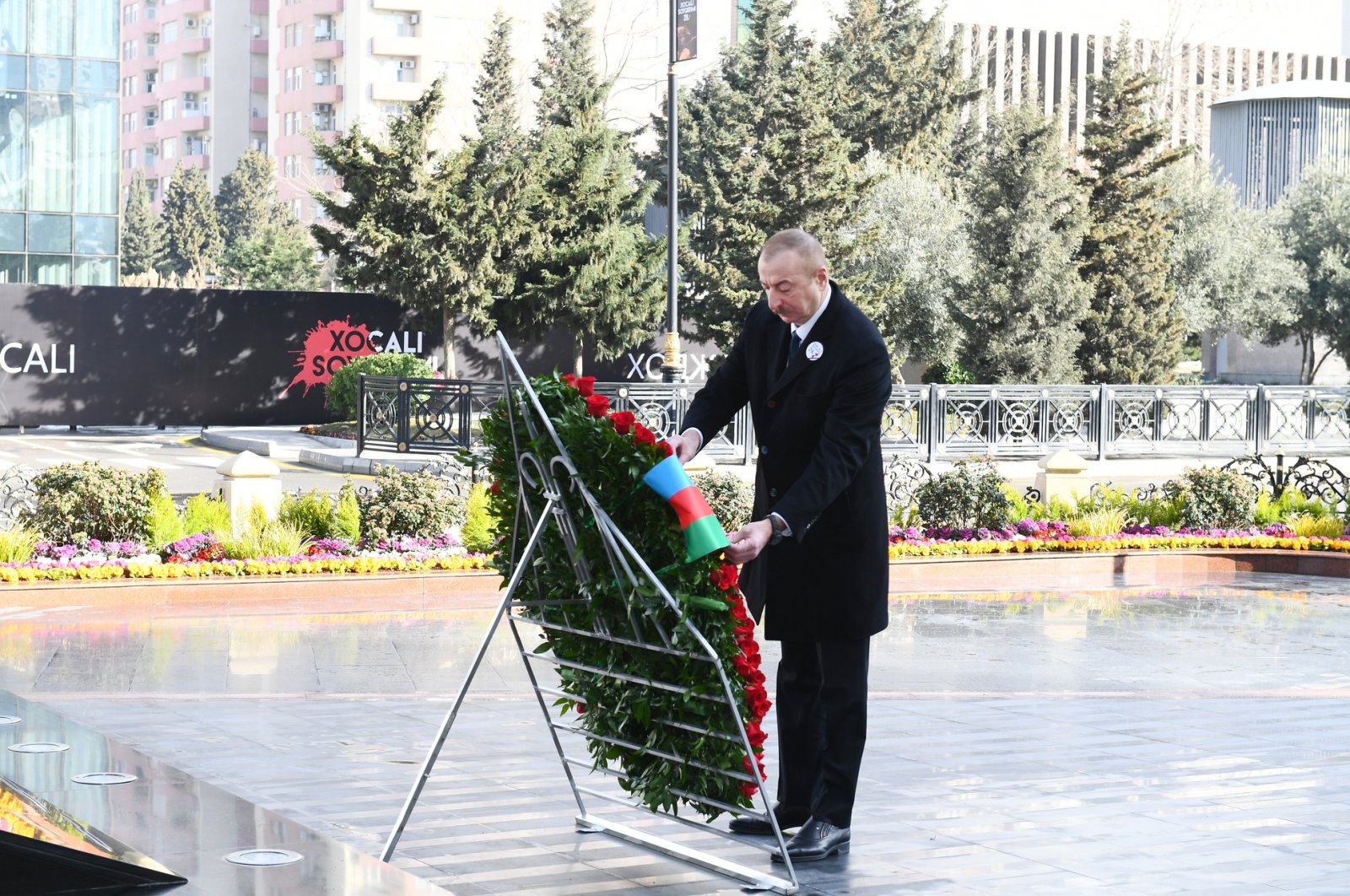 Azerbaijan's President Ilham Aliyev is seen during a ceremony to commemorate the 29th anniversary of the Khojaly Massacre in the capital Baku, Azerbaijan, Feb. 26, 2021. (AA Photo)
by DAILY SABAH WITH AA Feb 26, 2021 12:58 pm
RECOMMENDED

Azerbaijan's President Ilham Aliyev on Friday commemorated the 29th anniversary of the Khojaly Massacre and said that his country has avenged the victims by liberating the occupied territories in Karabakh from Armenia.

Speaking at a virtual news conference, Aliyev said that he hopes Armenia will abide by the Nov. 10 cease-fire deal to prevent further escalation, adding that Armenia's political crisis resulted from its occupying policies.

On Feb. 26, 1992, with the Soviet Union newly dissolved, Armenian forces took over the town of Khojaly in the occupied region of Nagorno-Karabakh after battering it using heavy artillery and tanks, assisted by its infantry. A total of 613 civilians were killed by Armenian soldiers in Khojaly, a strategically important settlement originally inhabited by 7,000 people. The attack killed 106 women, 63 children and 70 elderly people. The massacre is considered one of the bloodiest atrocities by Armenian forces against Azerbaijani civilians in the region, which was mostly liberated by Azerbaijan forces last fall after decades of occupation.

Some 487 people, including 76 children, were critically injured, while 150 of the 1,275 Azerbaijanis the Armenians captured during the massacre still remain missing. Eight families were completely wiped out, 130 children lost their fathers, and some 25 children became orphans in the massacre. According to the investigations launched by the Azerbaijani government based on expert statements and the testimonies of 2,000 survivors, Armenian forces tortured the captives by burning them alive, slaughtering people, peeling off their scalps, cutting off ears, noses or sexual organs, and removing their eyes, alongside mass killings.

While the horrors of the Khojaly Massacre still continue to haunt the Azerbaijani community, Armenian authorities are far from acknowledging responsibility despite all the evidence of the incident. On the 29th anniversary of the tragedy, Azerbaijani officials and surviving victims reiterated their call for justice and for those responsible to be punished.

In another speech on Thursday, Aliyev criticized Armenia saying internal conflicts occur almost daily in the country and the principles of democracy are ignored.

"Armenia has never been in such a pathetic situation," said Aliyev, addressing the current crises in Armenia in his speech at a ceremony in the capital Baku.

"It is their leaders who put them in this situation, both the Kocharyan-Sargsyan regime, which ruled the country for 20 years, and the administration that came after them," said Aliyev.

The ex-Soviet rivals signed a Moscow-brokered peace deal on Nov. 9, 2020 that ended the weeks of heavy fighting and documented that Armenia would surrender several territories to Baku.

On Thursday, the Armenian military released a statement calling on Prime Minister Nikol Pashinian to step down.

The premier blasted the military's call as a "coup attempt" and urged his supporters to take to the streets to resist. He later announced the dismissal of the Chief of General Staff on Facebook.