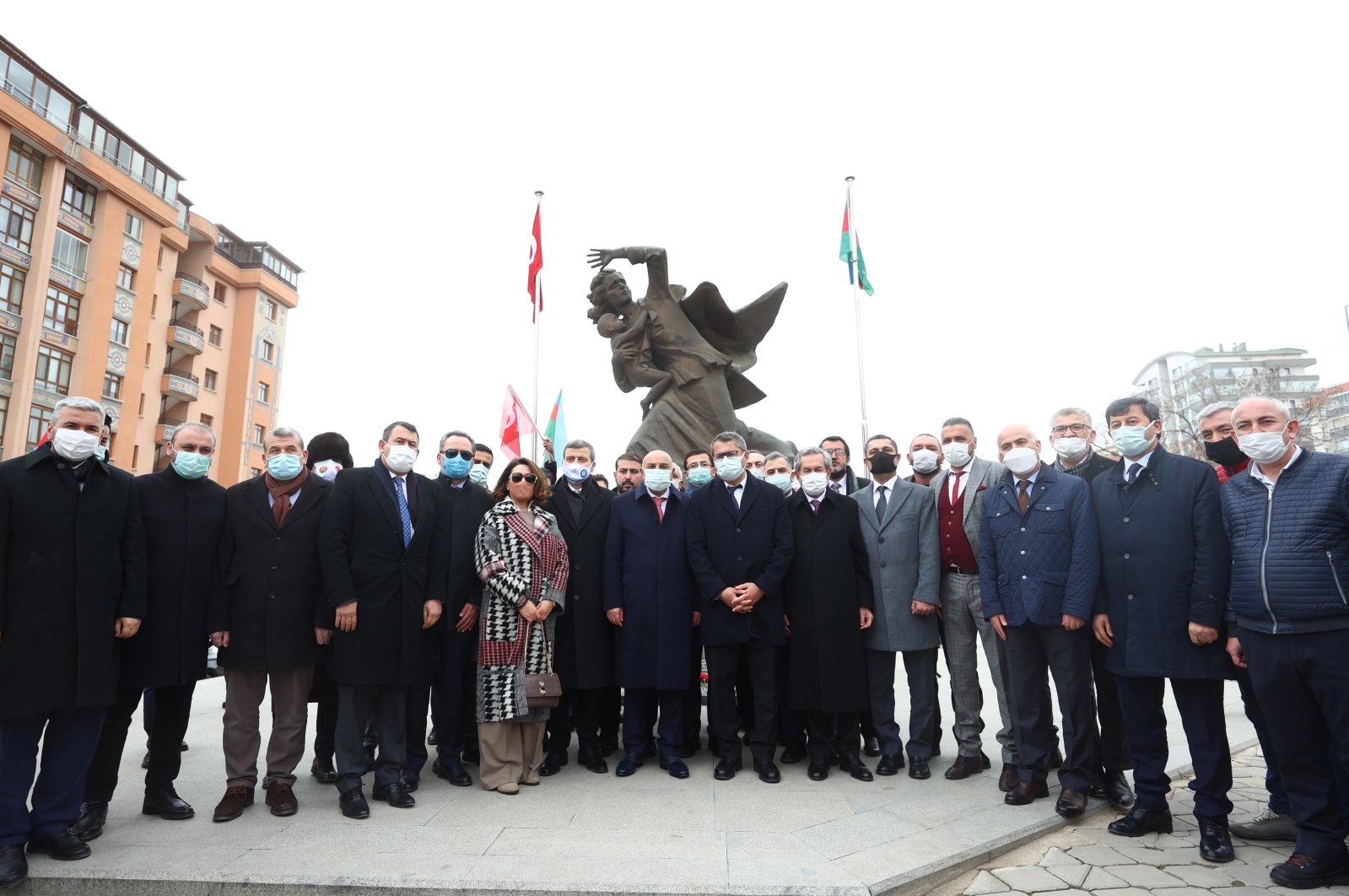 Turkey on Friday commemorated the 29th anniversary of the Khojaly Massacre, in which a total of 613 innocent civilians were killed by Armenian soldiers in the town of Khojaly during the first Karabakh war following the dissolution of the Soviet Union.

Releasing a Twitter message, President Recep Tayyip Erdoğan said that he wanted to honor with gratitude and mercy the memory of Azerbaijanis who were brutally murdered in Khoajly 29 years ago.

"On the 29th anniversary of the Khojaly Massacre, we will not forget its pain over the years and will experience its sadness over and over again; I remember with mercy our 613 Azerbaijani brothers and sisters who were mercilessly murdered, regardless of women, children or elderly people, and I express my condolences to the friendly and brotherly Azerbaijani people. We are one nation, two states. We, as Turkey, will continue to support the just struggle of Azerbaijan as Turkey," he said.

Releasing a written statement, the Foreign Ministry noted that 613 Azerbaijani civilians, including women and children, were murdered during Armenian forces' attacks targeting Khojaly in the Nagorno-Karabakh region, and hundreds of them were injured on Feb. 26, 1992.

"In these attacks, more than a thousand people were taken prisoner. Unfortunately, the fate of missing people is still unknown. We know that the wounds caused by the Khojaly Massacre, which took place in front of the world's eyes, are still fresh. We feel the pain of dear Azerbaijan deep in our heart, and we share it," the ministry said.

Wishing God's mercy for those who lost their lives in the inhumane massacre and offering condolences to the people of Azerbaijan, the statement said that Turkey respectfully remembers the memories of victims.

On Feb. 26, 1992, with the Soviet Union newly dissolved, Armenian forces took over the town of Khojaly in the occupied region of Nagorno-Karabakh after battering it using heavy artillery and tanks, assisted by infantry. A total of 613 civilians were killed by Armenian soldiers in Khojaly, a strategically important settlement originally inhabited by 7,000 people. The attack killed 106 women, 63 children and 70 elderly people. The massacre is seen as one of the bloodiest atrocities by Armenian forces against Azerbaijani civilians in the region, which was mostly liberated by Azerbaijan forces last fall after decades of occupation.

Some 487 people, including 76 children, were critically injured, while 150 of the 1,275 Azerbaijanis the Armenians captured during the massacre still remain missing. Eight families were completely wiped out, 130 children lost their fathers, and some 25 children became orphans in the massacre. According to the investigations launched by the Azerbaijani government based on expert statements and the testimonies of 2,000 survivors, Armenian forces tortured the captives by burning them alive, slaughtering people, peeling off their scalps, cutting off ears, noses or sexual organs, and removing their eyes, alongside mass killings.

While horrors of the Khojaly Massacre still continue to haunt the Azerbaijani community, Armenian authorities are far from acknowledging responsibility despite all the evidence of the incident. On the 29th anniversary of the tragedy, Azerbaijani officials and surviving victims reiterated their call for justice and for those responsible to be punished.

The ruling Justice and Development Party's (AK Party) Deputy Chairperson Numan Kurtulmuş said in a Twitter message: "We will keep taking a stance against such crimes committed against humanity and taking side with victims, oppressed and brothers."

Turkish foundations in the United States shared a message commemorating the massacre released by the Turkish-American Steering Committee (TASC) that underlines that the international community must be informed of the atrocities committed by Armenian forces, demanding justice for the war crime.

The statement called on the U.S. and the international community to hold Armenian leaders responsible for the massacre.

The Union of Turkish Bar Associations (TBB) also highlighted that a significant portion of Azerbaijan's territories were occupied during the first Karabakh war and reminded that armed forces backed by Armenia invaded the Azerbaijani land in a clear violation of international law.

They reiterated their call for justice and that the perpetrators of the massacre be held accountable for their actions.

Several U.N. Security Council and General Assembly resolutions, as well as decisions by many other international organizations, demanded the withdrawal of the Armenian forces from the Nagorno-Karabakh region.

The Organization for Security and Co-operation in Europe's (OSCE) Minsk Group – co-chaired by France, Russia and the U.S. – was formed to find a peaceful solution to the conflict but had not yielded results.

The ex-Soviet rivals signed a Moscow-brokered peace deal on Nov. 9, 2020, ending weeks of heavy fighting and documenting that Armenia would surrender several territories to Baku.

Still, both sides accuse each other of crimes against humanity. Last month, Azerbaijan applied to the European Court of Human Rights (ECtHR), suing Armenia for its human rights violations during its nearly 30-year occupation of the Nagorno-Karabakh region.