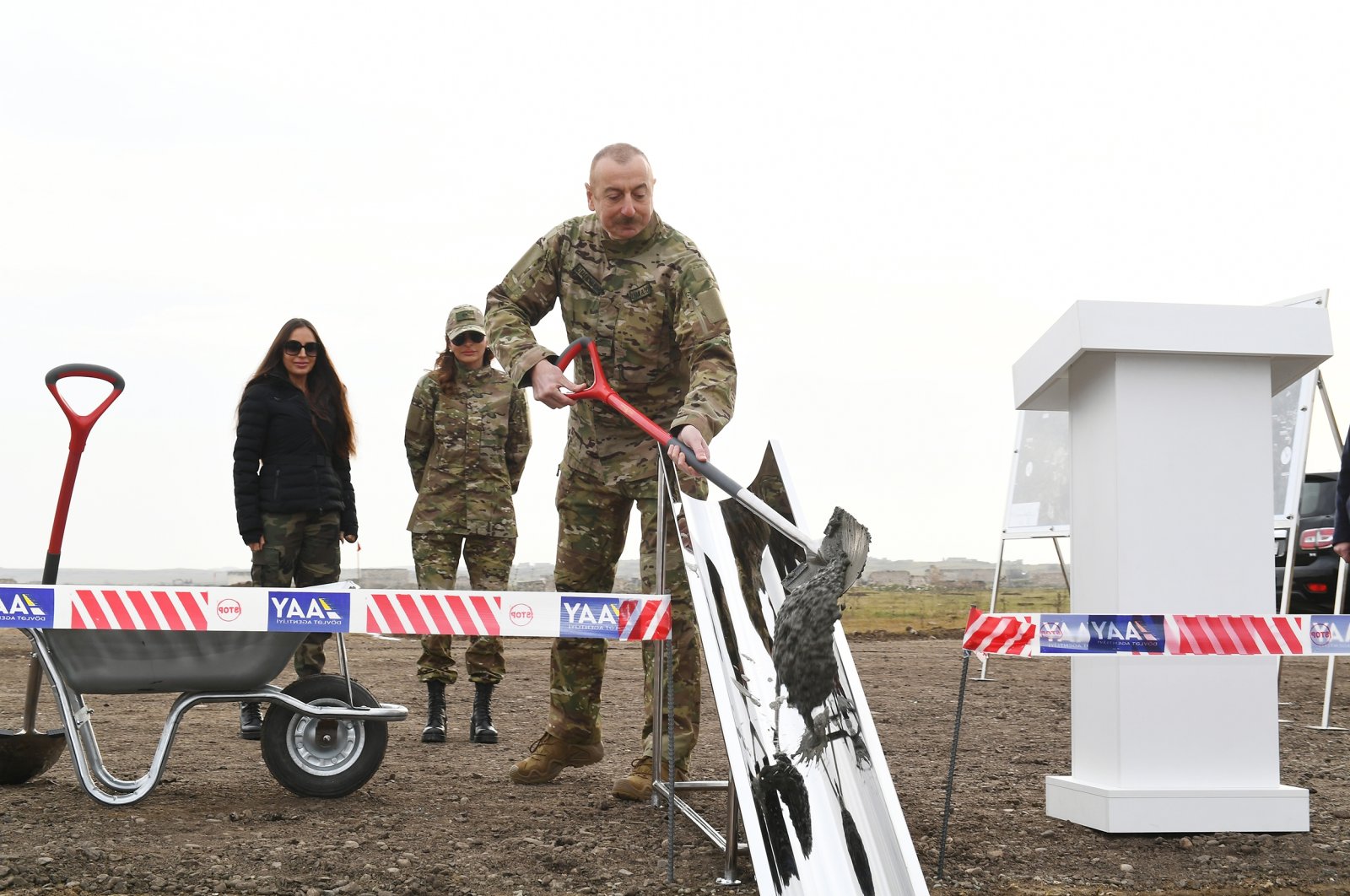 The leader of Azerbaijan laid the foundation for a new airport and highway in Fuzuli district, which was recently liberated from Armenia's nearly three-decade-long occupation, the presidency said Friday.

On Thursday, President Ilham Aliyev helped pour stone for the Fuzuli-Shusha Highway, which includes the construction of bridges and tunnels, at the 27 kilometer (17 mile) mark of the Ahmadbayli-Fuzuli-Shusha highway, as well as an international airport in Fuzuli district.

The airport will have a 2.8-kilometer (1.7-mile) runway and is expected to be equipped with infrastructure according to international standards.

He said the main purpose of the airport is to facilitate the arrival of foreign visitors to Shusha, which is near the airport.

Accompanied by first lady Mehriban Aliyeva and their daughter, Leyla, the president then visited Shusha, the cultural capital of Azerbaijan, which was also liberated from Armenian forces.

"Work has begun to restore the city of Shusha, restore its historical appearance. In general, only two months have passed since the war ended, but extensive construction work has already begun," he said.

"The great return begins. All work has begun. I am sure that just as we drove the enemy out of our lands in a short time – in a matter of 44 days – we will restore our ancestral lands of Karabakh in a short time. Karabakh is Azerbaijan!," said Aliyev.

During a meeting with servicemen in Shusha, Aliyev said he would restore the city and all destroyed areas and historical sites.

"In the near future, we will ensure the restoration of Shusha in a planned manner. Of course, from now on we must protect Shusha like the apple of an eye. Our soldiers, our heroic sons will protect Shusha so that the enemy does not venture to look in this direction," he said.

Aliyev stressed that if anyone in Armenia thinks of revenge, they will again deal with Azerbaijan's "iron fist.”

"This iron fist broke their backs and crushed their heads. If they commit any provocation against us, our response will be very harsh, they will be very sorry and face a bitter defeat again," he said.

Aliyev and his family later visited the Saatli, Yukhari Govharagha and Ashaghi Govharagha mosques. Following prayers, he presented Qurans brought from Mecca to the mosques.

"During the occupation, the enemy destroyed our religious sites in the liberated lands, devastated 67 mosques or made them unusable," he said.

During the six-week-long conflict, Azerbaijan liberated several cities and nearly 300 settlements and villages, while at least 2,802 of its soldiers were killed. There are differing claims about the number of casualties on the Armenian side, which, sources and officials say, could be as high as 5,000.

Violations, however, have been reported in recent weeks, with Armenian soldiers reportedly hiding in the mountainous enclave.