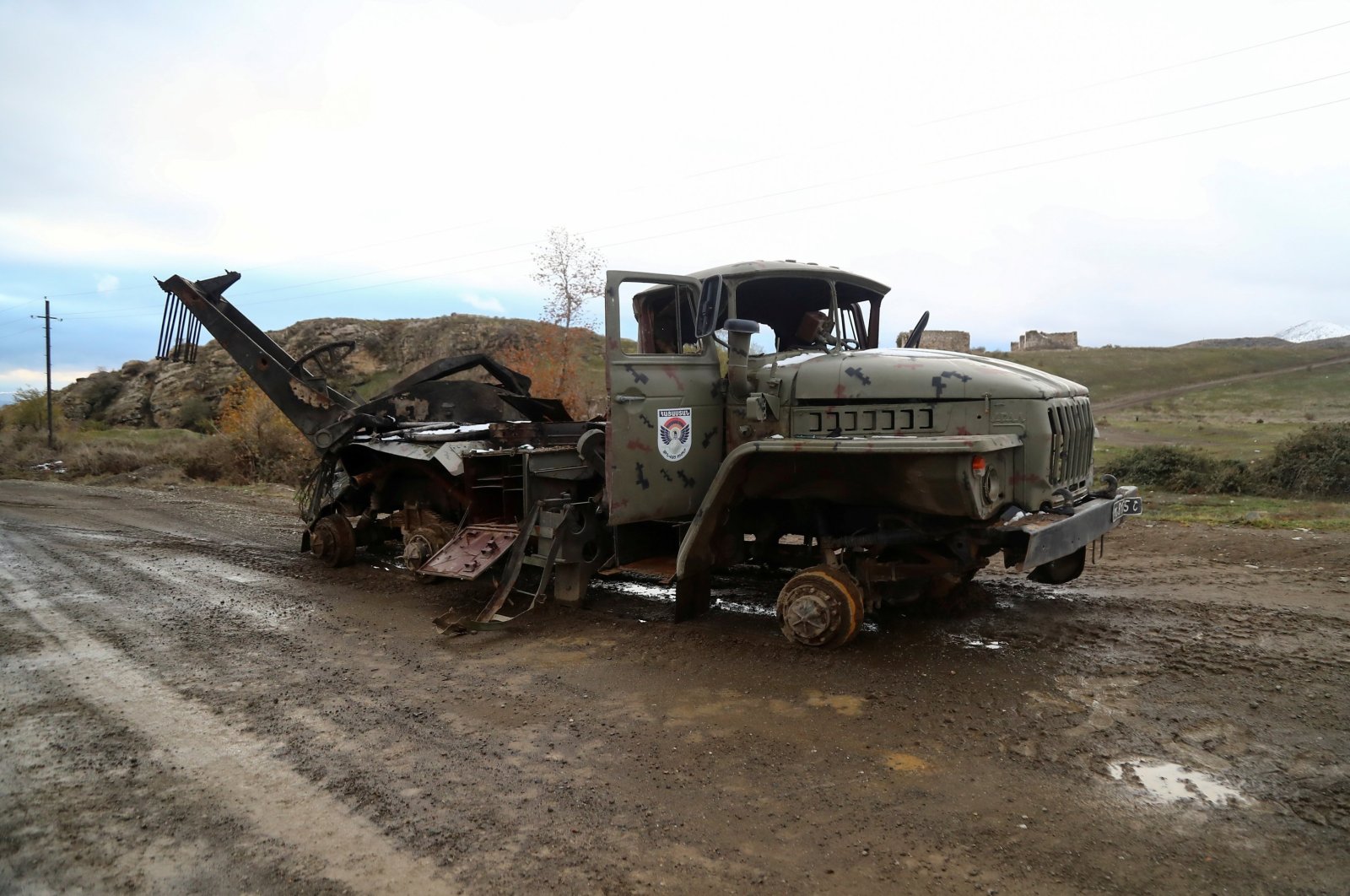 A damaged truck belonging to Armenian forces in an area that came under the control of Azerbaijan's troops following a military conflict over Nagorno-Karabakh, in Jabrayil District, Azerbaijan, December 7, 2020. (Reuters Photo)
by DAILY SABAH WITH AGENCIES Jul 25, 2021 12:54 pm
RECOMMENDED

In the latest military incident between Azerbaijan and Armenia since their war over the Nagorno-Karabakh region last year, an Azerbaijani soldier was killed by Armenian fire in the western Kalbajar province on the border with Armenia, according to military sources.

The soldier was killed by the Armenian army, which fired on the Azerbaijani army's positions, said a statement from the Azerbaijan Defense Ministry Saturday.

Armenia aims to aggravate the situation on the border, the statement said, noting that Armenia bears full responsibility for the provocation.

The six-week war last autumn claimed about 6,500 lives and ended in November with a Russian-brokered cease-fire under which Armenia ceded territories it had occupied for decades.

Both Azerbaijan and Armenia have reported occasional shootouts in recent months along their shared border, sparking fears of a flare-up in the territorial dispute.

"An Azerbaijani army serviceman was killed by the enemy's sniper," it said.

Armenia blamed the Azerbaijani military for initiating the incident, with its defense ministry saying "three Armenian servicemen were wounded in the intense shootout."

The clashes were continuing late in the evening, both countries reported.

Tensions between Baku and Yerevan have been running high since May, when Armenia accused Azerbaijan's military of crossing its southern frontier to "lay siege" to a lake shared by the two countries.

"This is our ancestors' land, we are on our land," Azerbaijani President Ilham Aliyev told the AzTV network on Thursday, referring to the territory which Armenia considers part of its Syunik district.

In May, Aliyev said Baku was ready for peace talks with Armenia.

Armenian Prime Minister Nikol Pashinian announced at the time that the two ex-Soviet nations were holding discussions on the delimitation and demarcation of their shared borders.

Relations between the former Soviet republics of Armenia and Azerbaijan have been tense since 1991 when the Armenian military occupied Nagorno-Karabakh, a territory internationally recognized as part of Azerbaijan, and seven adjacent regions

During the 44-day conflict that ended under a deal signed on Nov. 10, Azerbaijan liberated several cities and nearly 300 settlements and villages from Armenia's nearly three-decade occupation.