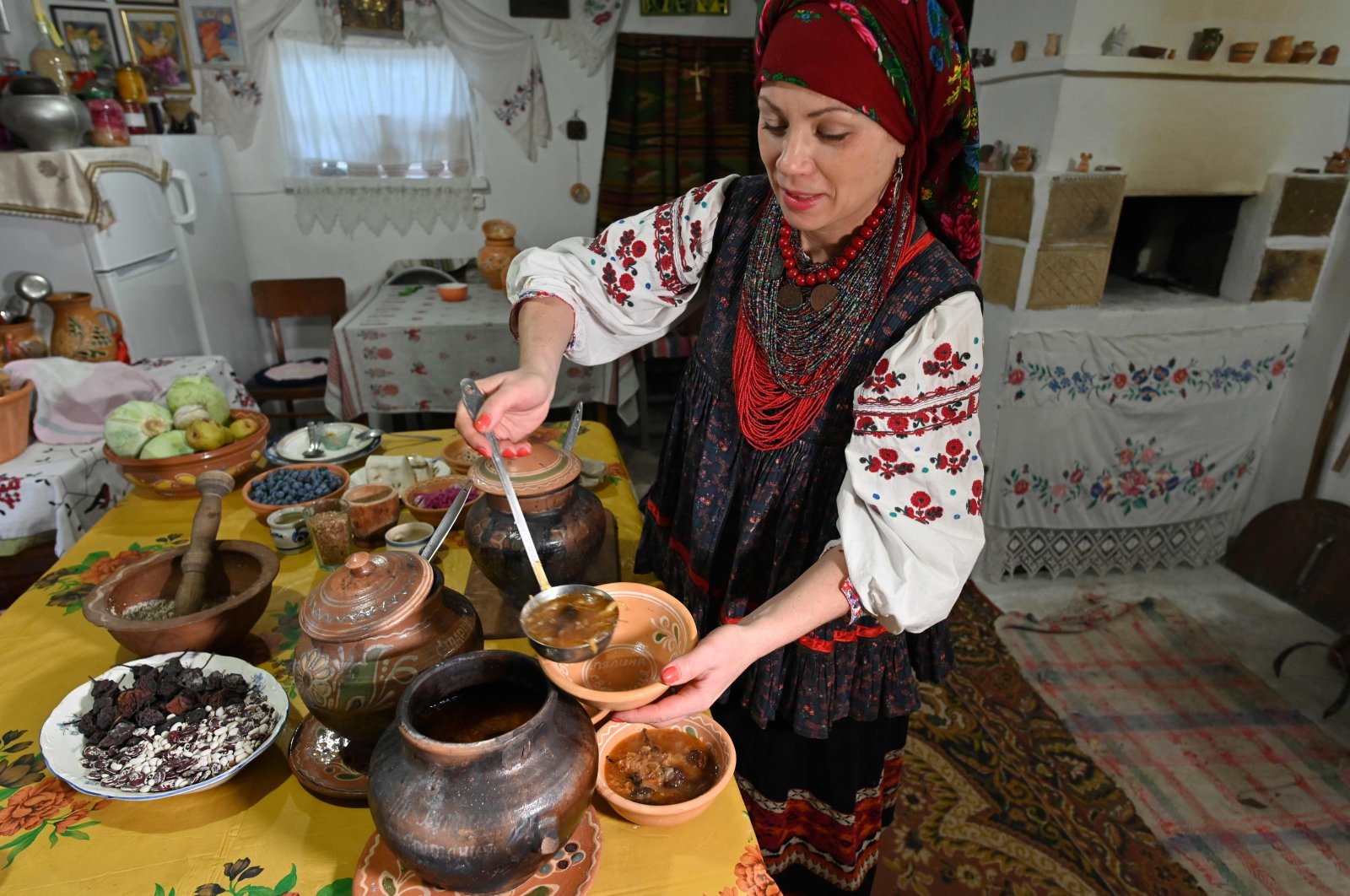 An Ukrainian ethnologist and historian, who studies borscht and has 365 of its unique recipes from all over Ukraine in her private collection, wears Ukraine's traditional clothes and headdress cooks borscht in clay pots in the wood stove in the village of Opishnya in Poltava region, Nov. 26, 2020. (AFP Photo)
by French Press Agency - AFP Dec 01, 2020 12:03 pm
RECOMMENDED

Ukrainian chef Ievgen Klopotenko never expected to find himself at the center of the conflict between Russia and Ukraine. But that's just what happened when the 33-year-old pushed to have borscht, the traditional beetroot and cabbage dish, recognized as part of Ukraine's historical heritage.

"I don't really like to call it a war for borscht, but in fact, that's what it is," Klopotenko, a graduate of the Le Cordon Bleu culinary school, told Agence France-Presse (AFP) in his renowned Ukrainian restaurant in central Kyiv. The chef said he was fed up with how restaurants around the world, including those serving "so-called Ukrainian cuisine," were referring to borscht as Russian soup.

So last month he brought a pot of borscht to Ukraine's culture ministry to convince officials to submit an application to the United Nations cultural body, UNESCO, to list borscht as an intangible part of the country's cultural heritage.

The list already includes French gastronomy, Neapolitan pizza and Georgian wine. The ministry agreed and said it was preparing the application to UNESCO before the March deadline, so it can be examined in December next year.

And suddenly Moscow bristled. "Borscht is a national food of many countries, including Russia, Belarus, Ukraine, Poland, Romania, Moldova and Lithuania," Russia's embassy in the United States said on Twitter.

The Russian government soon followed on its own Twitter account, calling borscht "one of Russia's most famous and beloved dishes and a symbol of traditional cuisine".

Ukrainians claim that borscht was first mentioned in 1548 in the diary of a European traveler who tasted the soup in a market near Kyiv. They say it arrived in Russia much later with Ukrainian settlers. Tensions between Kyiv and Moscow have flared in the decades following the breakup of the Soviet Union in 1991. After a pro-Western popular uprising in Kyiv in 2014 followed by Russia's annexation of Crimea and support of separatists in the east, the confrontation has intensified.

For Klopotenko, the battle over borscht is really about Ukraine's identity. The country has been closely tied to Russia for most of its history. Much of what is now Ukraine was part of the czarist Russian empire, and later the country became part of the Soviet Union. "When I started studying Ukrainian food and cuisine, I realized that Ukrainian cuisine does not exist in Ukraine. It's all Soviet," Klopotenko said. The Soviet Union "swallowed" Ukraine, "chewed it and spat it out ... We don't know who we are or what we are," he added. But there is one thing for Klopotenko that is quintessentially Ukrainian: the beetroot and cabbage soup. "I realized that borscht is what unites us," he said.