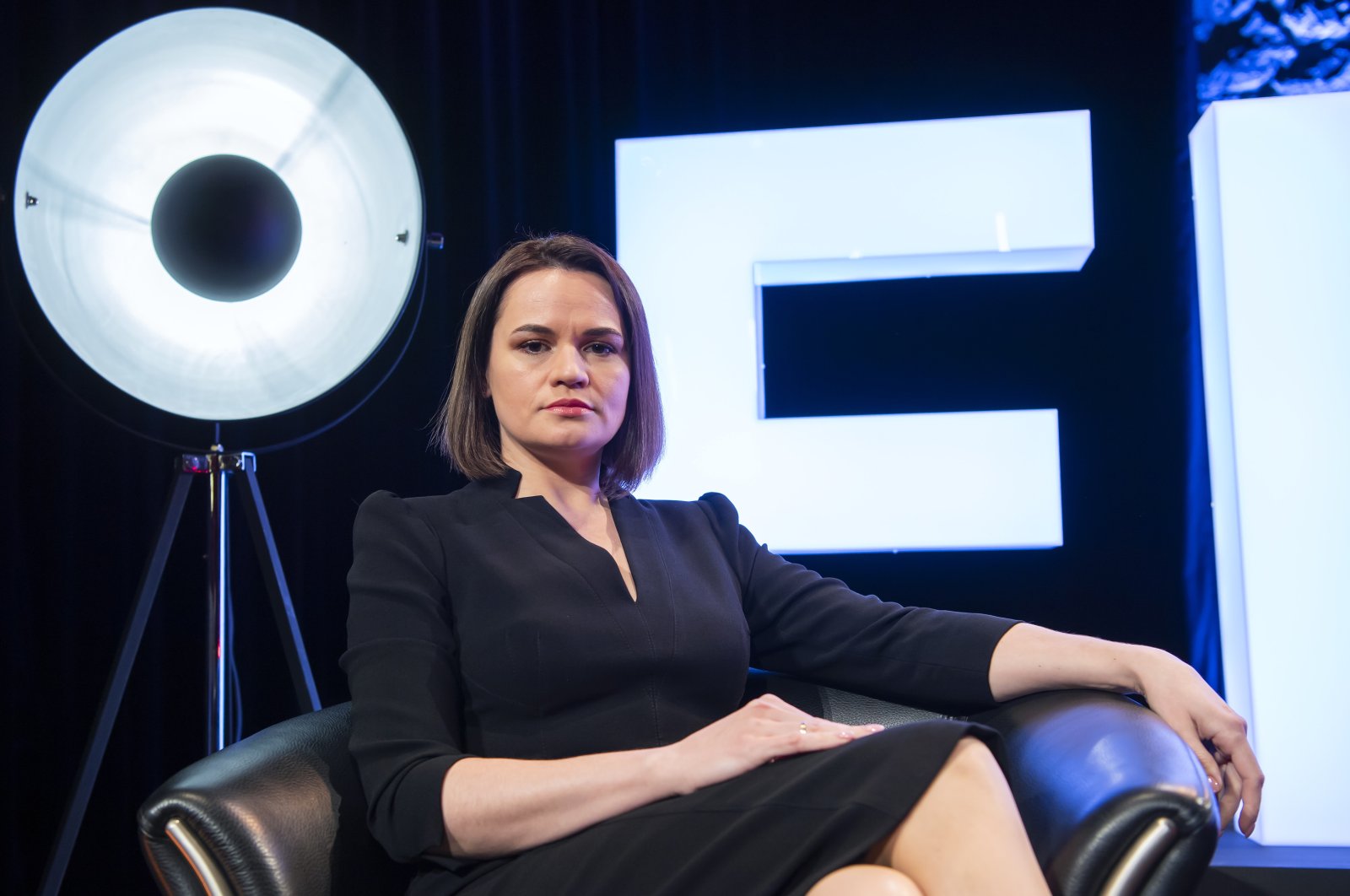 Svetlana Tikhanovskaya, a Belarusian human rights activist and politician who ran for the 2020 Belarusian presidential election as the main opposition candidate, poses for the photographer during the 19th edition of the FIFDH, in Geneva, Switzerland, March 7, 2021. (EPA Photo)
by French Press Agency - AFP Mar 08, 2021 12:58 pm
RECOMMENDED

Exiled Belarus opposition leader Svetlana Tikhanovskaya has no intention of stopping her fight against the government of Alexander Lukashenko, and is appealing to the United Nations to help intensify pressure on the regime, she told Agence France-Presse (AFP) Sunday.

Belarus was gripped by months of unprecedented anti-government demonstrations that erupted after a disputed presidential election last August which saw Lukashenko claim a sixth term in office.

His opponents say the polls were rigged and that political novice Tikhanovskaya, who ran in place of her jailed husband, was the true winner.

"We're convinced that at some point this regime is going to fall, because the pressure it's under is coming from inside just as much as from outside," said Tikhanovskaya, who has been living in Lithuania.

"At some point, it won't be able to avoid starting negotiations to get out of this enormous crisis."

"The pressure has to be ramped up," she insisted.

On Friday, Belarus requested Tikhanovskaya's extradition "to face prosecution for crimes against the governing order, public safety and the state", an appeal immediately rejected by Lithuania.

Asked about whether she felt safe in Europe in light of the extradition attempt, Tikhanovskaya was stoic.

"There's a minimum risk but that's not going to stop me in my fight," she told AFP calmly.

Tikhanovskaya is in Geneva to take part in a debate on Belarus organized by the International Film Festival and Forum on Human Rights (FIFDH) but is using the opportunity to argue the Belarus opposition's case to U.N. officials too.

Accompanied by an impressive security detail, the 38-year-old mother-of-two was surrounded by dozens of supporters outside the U.N. headquarters.

The U.N. Human Rights Council is currently in session, and Tikhanovskaya hopes it will adopt a resolution on Belarus.

At its previous session in September, it held an urgent debate on Belarus and adopted a resolution calling on the authorities to enter into a dialogue with the opposition.

Tikhanovskaya said she hopes the 47-member body will continue to help her country out of "repression", and will meet two independent U.N. experts in the next few days to make her case.

"We'd like the resolution to mention the Special Rapporteur on Belarus, so they can have access to prisons and to detainees, and see for themselves the absolutely deplorable conditions in these places," she said.

Tikhanovskaya also wants the resolution to provide for the establishment of an expert group charged with investigating the human rights situation in the country – because "we can see very well that it's not possible to have direct negotiations between Belarusian society and the regime".

She hopes though that Belarusian authorities might be persuaded to set up "a platform for dialogue" through the Organization for Security and Co-operation in Europe (OSCE).

"We'd like for these negotiations, these discussions to be as open and as transparent as possible, and for them to involve neighboring countries but also other democratic countries," she said, in a nod to next-door Russia, which supports Lukashenko's government.

Tikhanovskaya acknowledged, not for the first time, that the opposition had lost the battle for the streets in Belarus, saying security forces had largely managed to put paid to the large-scale demonstrations last year.

"People are still going out on the streets, but they are smaller groups completely spread out across the city, because the levels of violence and repression are such that people are looking for ways to protest that puts them less at risk of being arrested and put in prison," she explained.

When asked if her personal sacrifices for the cause were worth it, she said: "I would take the same path again, but I don't like seeing the sacrifices made by the people, all the victims of repression."