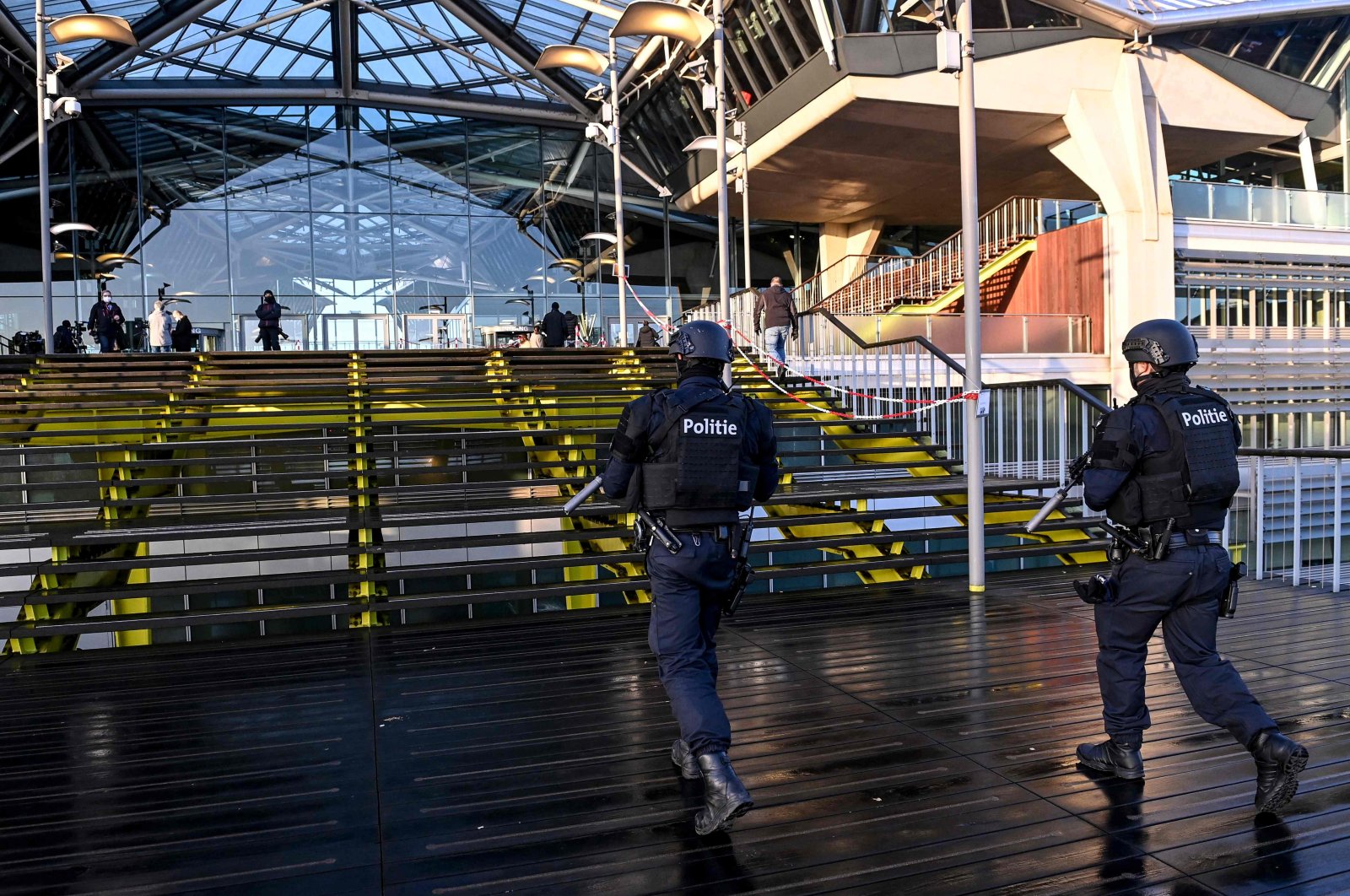 Heavily armed policemen patrol outside the courthouse during the trial of four persons including an Iranian diplomate and Belgian-Iranian couple before the Antwerp criminal court in Antwerp, on Feb. 4, 2021. (AFP Photo)
by French Press Agency - AFP Feb 04, 2021 5:44 pm
RECOMMENDED

A Belgian court convicted an Iranian diplomat Thursday for plotting a thwarted 2018 bombing of an exiled opposition group outside French capital of Paris and ordered him jailed for 20 years.

The trial was conducted under tight security in the Belgian port of Antwerp and has further poisoned already tense relations between Tehran and European capitals. The terrorism conviction was also claimed as a victory by the exiled National Council of Resistance in Iran (NCRI), the opposition group that was targeted for attack.

Assadollah Assadi, 49, was attached to the Iranian mission in Austria when he supplied explosives for an attack that was planned for a June 30, 2018 NCRI rally in France.

Belgian officers foiled the attack when they intercepted a car carrying the device, and Assadi was arrested the next day in Germany, where he was deemed unable to claim diplomatic immunity. Three of his accomplices, dual Iranian-Belgians, were also arrested and on Thursday were given jail terms of between 15 and 18 years and stripped of their Belgian citizenship.

The 2018 gathering in Villepinte, near Paris, included senior NCRI leaders and some high-profile supporters, including former U.S. President Donald Trump's personal lawyer Rudy Giuliani. The case has shone a light on Tehran's international operations just as it hopes the arrival of new U.S. President Joe Biden will herald a loosening of sanctions reimposed by Trump.

Dressed as a tourist

Assadi was charged with "attempted murders of a terrorist nature" and "taking part in the activity of a terrorist group." Iran had warned even before the conviction that it would not recognize the trial or the verdict, denying any official role in the plot and insisting Assadi ought to have enjoyed immunity from prosecution. But investigators concluded that he was an Iranian agent working under diplomatic cover.

They showed the court surveillance pictures of Assadi dressed as a tourist, in a hat and with a camera, handing the Belgian-Iranian couple a package in Luxembourg on June 28, 2018. The couple – Nasimeh Naami, 36, and Amir Saadouni, 40 – were found to have accepted from Assadi a half-kilo (1 pound) of TATP explosives and a detonator. Naami, painted in court as highly manipulative, received an 18-year sentence and Saadouni 15 years.

Belgium-based Iranian former dissident Mehrdad Arefani was found to have been an accomplice of Assadi's who had been due to guide the couple at the rally. He was the only defendant to agree to appear in court for the sentencing and sat impassively as he was jailed for 17 years. Belgian officers halted the couple's car with the bomb onboard on the day of the event, preventing what the NCRI's lawyers said would have been a "bloodbath."

Later that year, the French government accused Iran's intelligence service of being behind the operation, a charge the Islamic Republic has furiously denied.

The case stirred tensions between European powers and Tehran, and was seized upon by NCRI supporters to press their case against the Iranian regime. The group's leader Maryam Rajavi tweeted that the convictions dealt "a heavy political and diplomatic blow to the regime in Iran."

A Belgian lawyer acting for the group at the trial, Georges-Henri Beauthier, told reporters that the court had recognized the role of the Iranian intelligence services in arming and funding the plotters.

The NCRI is the political wing of the Mujahedeen-e-Khalq (MEK), known in English as the People's Mujahedin Organisation of Iran (PMOI).

The MEK backed Ayatollah Ruhollah Khomeini in the 1979 revolution that ousted Shah Mohammad Reza Pahlavi but rapidly fell out with the new authorities. The group sided with Iraq under Saddam Hussein in the 1980-1988 Iran-Iraq war and thousands of its alleged members were executed in a ruthless crackdown in Iran.

It now wages a campaign against the state in exile and regards itself as the most significant opposition group outside the country. For detractors and many Iranians who do not support Tehran's government, the MEK is a cult-like group that the West once classed as a terrorist organization. It is banned in Iran but enjoys the support of several high-profile former U.S. and European officials and a network of Iranian exiles opposed to the regime.