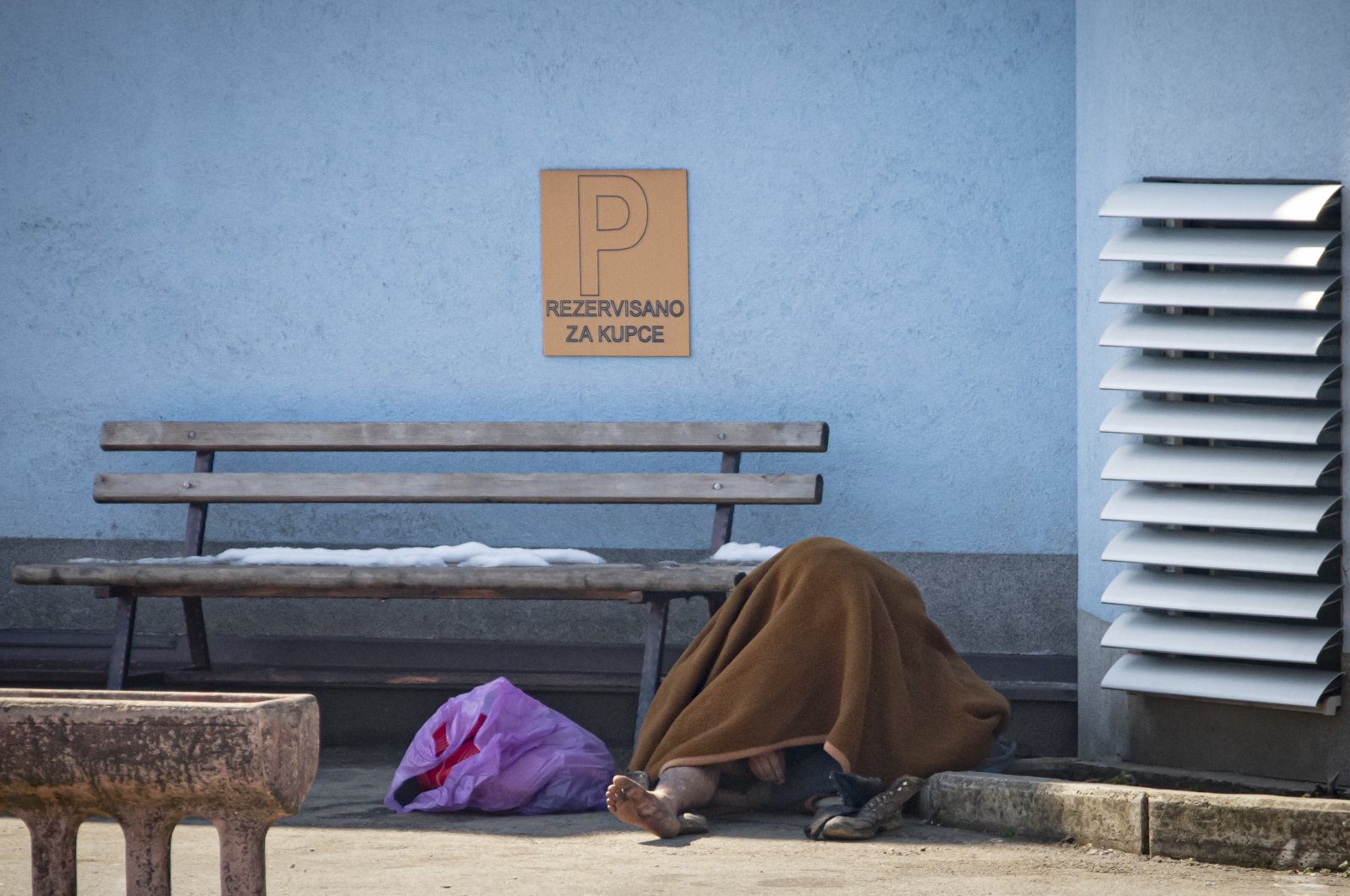 A migrant sits on the pavement to warm up outside the Miral camp, in Velika Kladusa, Bosnia-Herzegovina, April 7, 2021. (AP Photo)
by ASSOCIATED PRESS Apr 08, 2021 12:31 pm
RECOMMENDED

COVID-19 infections are rising among migrants and refugees in Bosnia-Herzegovina, which is struggling to cope with one of the Balkans' worst coronavirus outbreaks.

More than 6,000 migrants are stuck in the dysfunctional, war-scarred country trying to reach neighboring Croatia, a European Union member from which they hope to move on to the continent's prosperous heartland.

Many are accommodated in official asylum centers but others are sleeping rough in abandoned houses or makeshift tent towns along the Croatian border.

While sporadic cases of coronavirus infections among migrants and refugees have been reported since the start of the pandemic, the current outbreak in Bosnia's camps is the biggest so far, and several facilities have been quarantined.

Over the past two weeks, 147 infections have been recorded in just one camp – more than half the total 265 infections recorded among migrants since the outbreak of the pandemic.

The quarantine orders have caused tensions.

Some 50 migrants jumped the fences and fled one of the camps earlier this week, flouting quarantine. Local health authorities criticized the United Nations migration agency that is running the camps over the incident.

“This should not have been allowed to happen,” said regional health official Nermina Cemalovic. “We are concerned about a big number of migrants who are (COVID-19) positive, who are outside the centers and whom we cannot monitor.”

Bosnia has reported more than 7,000 COVID-19 deaths among its 3.3 million population – among the worst figures in Europe. This is partly because the health system has still not recovered from the 1992-95 war that was part of the bloody break-up of the former Yugoslavia.

The Danish Refugee Council (DRC), a humanitarian group that has handled the response to the pandemic among migrants and refugees in Bosnia, said the situation is “under control,” with new cases isolated and none in need of hospitalization.

“Unavoidably, as the result of the general situation in the country, we have seen an increase in the number of cases at the reception centers,” said Nicola Bay, Bosnia director for DRC. “However there has been a rapid response to this, the situation is under control.”

The Balkan nation has started vaccinations relatively late, with donations from abroad and shipments via the COVAX international mechanism.

Bay said almost all COVID-19 cases in the migrant camps are very mild or asymptomatic.

"They don’t normally require hospitalization or medical treatment,” he said. “They are isolated at reception centers to prevent further spread, and attended to medically at the reception centers.”