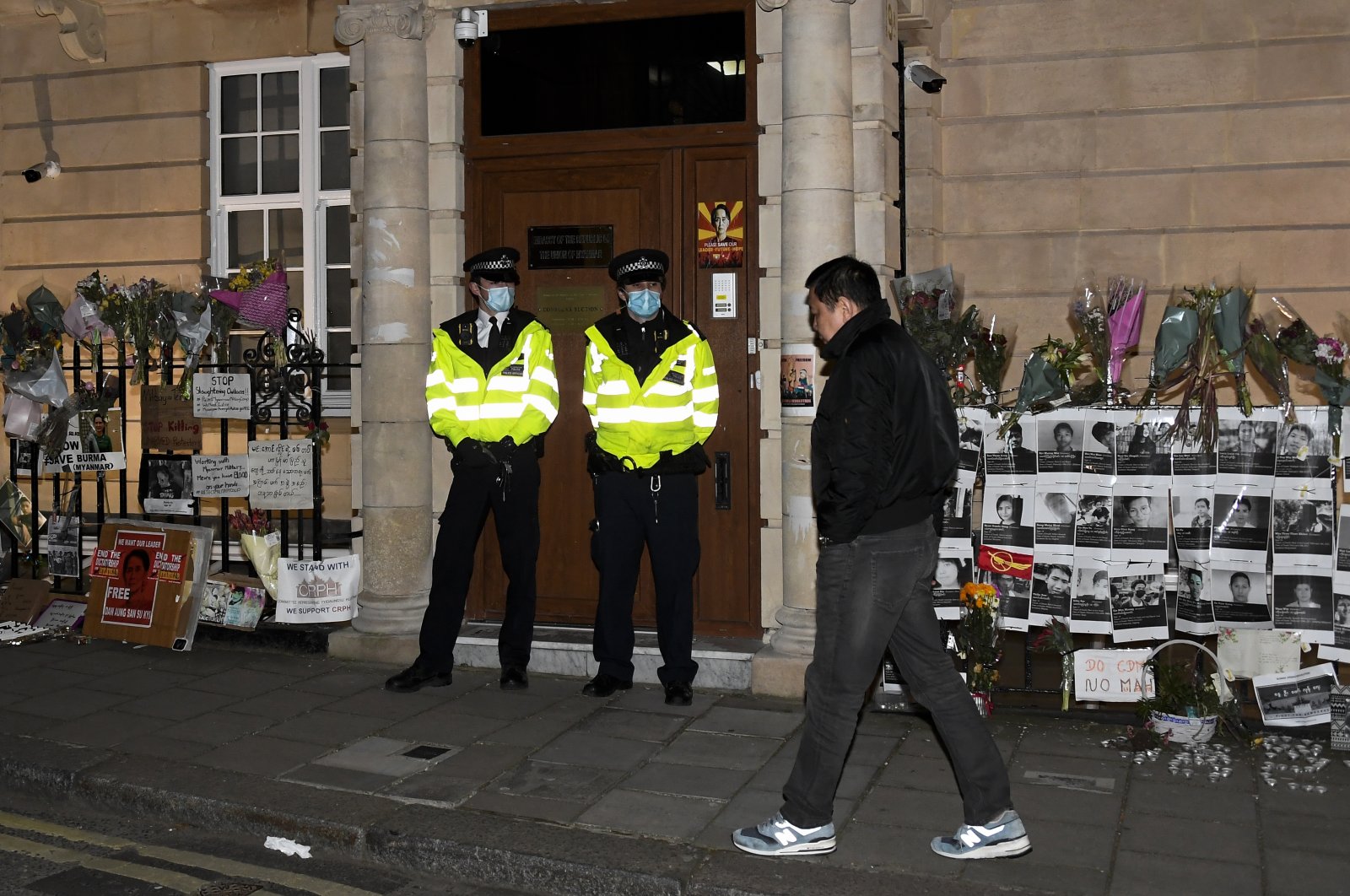 Myanmar's Embassy in London was taken over by members of the country's new military regime Wednesday evening.

Diplomats loyal to Myanmar's junta seized the country's embassy, leaving the ambassador locked out in the street after he called for the release of ousted civilian leader Aung San Suu Kyi.

The ambassador, Kyaw Zwar Minn, said Wednesday the defense attache, Chit Win, had taken over the mission in "a kind of coup," an extraordinary diplomatic standoff that comes two months after the military seized power in Myanmar.

According to Reuters, Zwar Minn urged the British government on Thursday to refuse to recognize the junta's envoys and send them back to Myanmar.

Britain confirmed Thursday that it could no longer recognize Myanmar's ambassador in London, as Agence France-Presse (AFP) reported. U.K. sources said the government, in line with diplomatic policy, had to accede to the junta's decision regarding Zwar Minn.

British Foreign Minister Dominic Raab praised the ousted envoy's courage and repeated his call for a restoration of democracy in Myanmar. In a letter from Myanmar's Embassy to Britain's foreign ministry, those in control of the embassy said deputy ambassador Chit Win had taken over as charge d'affairs as of April 7.

The embassy drama puts Britain in a quandary: It has condemned and sanctioned the Myanmar military but could find it hard to evict those holed up in the embassy – in the Mayfair area of west London.

"We condemn the bullying actions of the Myanmar military regime in London yesterday, and I pay tribute to Zwar Minn for his courage," Raab said before the appeal, repeating his call for an end to violence and a return to democracy in Myanmar.

Daily protests demanding a return of democracy have rocked the country and brought a brutal response from the armed forces, with almost 600 civilians killed according to a local monitoring group. The coup prompted several high-profile diplomatic defections, including the country's ambassador to the United Nations.

Protesters gathered outside the mission with the ousted ambassador, who told the Daily Telegraph that "when I left the embassy, they stormed inside the embassy and took it."

"They said they received instruction from the capital, so they are not going to let me in," he added, calling on the British government to intervene. Asked who had taken over, he replied, "Defense attache, they occupy my embassy."

Britain has been a strong critic of the coup, hitting the military with several sets of sanctions, and its foreign ministry said it was "seeking further information" about the embassy standoff. AFP has tried to contact Myanmar's military authorities for comment on the incident but has not yet received a response.

Myanmar's security forces have struggled to quell protests and a civil disobedience movement aimed at stopping the military from running the country.They have used rubber bullets and live rounds to break up rallies and used night raids to arrest suspected dissidents.

The Assistance Association for Political Prisoners (AAPP) says at least 598 civilians have been killed and nearly 2,900 detained.

As part of its efforts to suppress the movement, the junta has issued a wanted notice for some 120 celebrities accused of fanning the protests by lending their support.

On Thursday, the military arrested leading actor, model and heartthrob Paing Takhon in a dawn raid at his mother's home in Yangon. The 24-year-old – a star in both Myanmar and neighboring Thailand – has been active in the protest movement both in person at rallies and through his massive social media following. In February, he posted pictures of himself in a white tracksuit with a megaphone, hard hat and a white fluffy dog strapped to his chest at a protest.

International powers have voiced anger and dismay at the junta's brutal approach, but the U.N. Security Council has stopped short of considering sanctions, with both China and Russia against the move.

A group representing the ousted civilian government on Wednesday began talks with U.N. investigators, saying it had gathered more than 200,00 pieces of evidence showing rights abuses by the junta.

A lawyer for the Committee for Representing Pyidaungsu Hluttaw (CRPH) – a group of members of Parliament from Suu Kyi's National League for Democracy (NLD) party – met the investigators to discuss alleged atrocities.

The CRPH says it has evidence of more than 540 extrajudicial executions and 10 deaths of prisoners in custody as well as torture and illegal detentions.

The military has defended seizing power, pointing to allegations of voting fraud in the November election, which Suu Kyi's party won comfortably, and says it is responding proportionately to the demonstrations.

Junta chief Gen. Min Aung Hlaing accused the protesters of wanting to "destroy the country" and said only 248 protesters had been killed, along with 16 police officers.