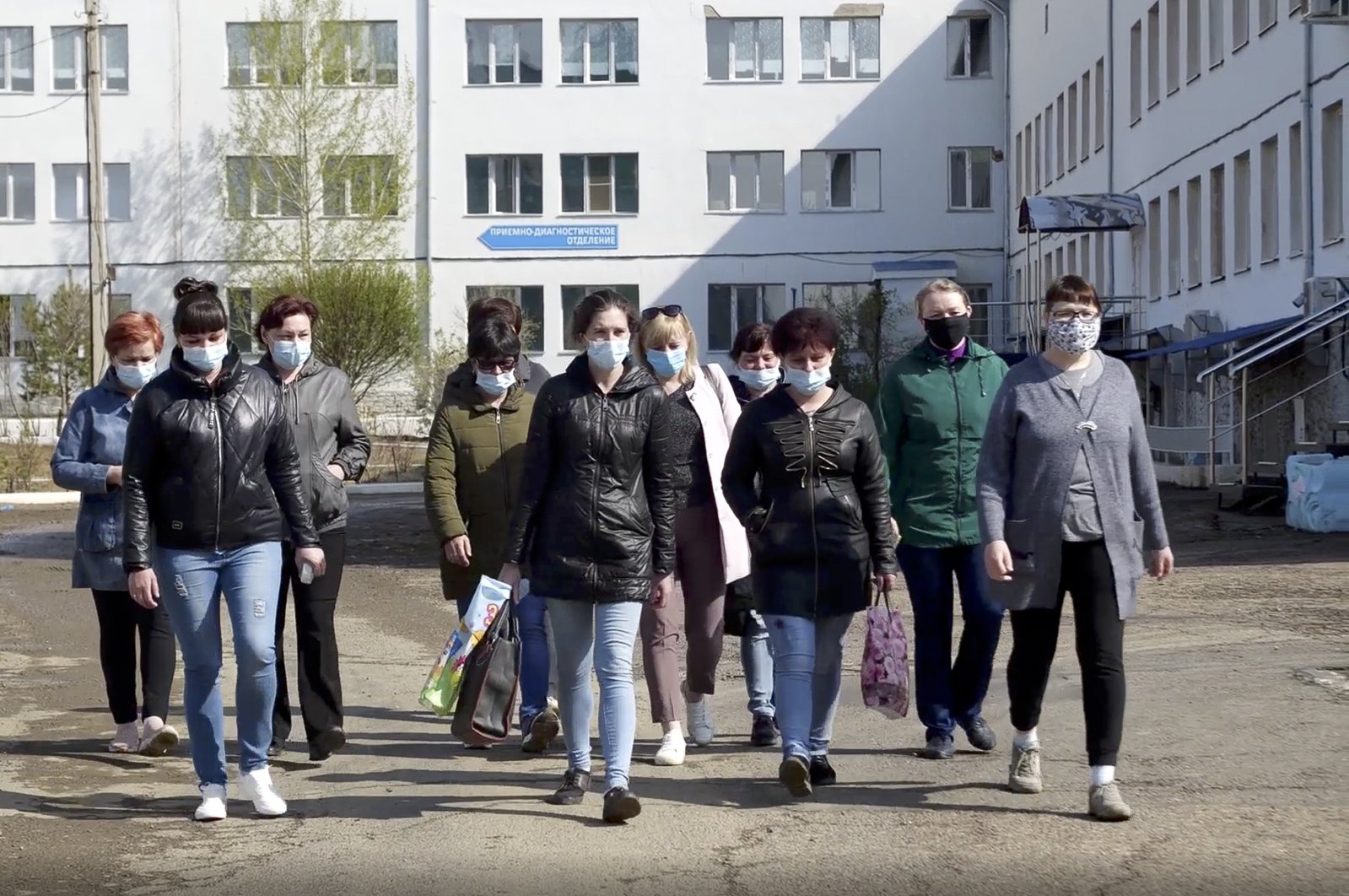 In this photo taken from video footage, nurses and orderlies walk to meet journalists in front of a hospital in Russia's Siberian city Chita, Russia, Saturday, May 16, 2020. (AP Photo)
by ASSOCIATED PRESS
May 21, 2020 10:20 am

There are no daily public displays of gratitude for Russian doctors and nurses during the coronavirus crisis like there are in the West. Instead of applause, they face mistrust, low pay and even open hostility.

Residents near the National Medical Research Center for Endocrinology, a Moscow hospital now treating virus patients, complained when they saw medical workers walking out of the building in full protective gear, fearing the workers would spread contagion.

“Maybe once the disease knocks on the door of every family, then the attitude to medics will change,” said Dr. Alexander Gadzyra, a surgeon who works exhausting shifts.

The outbreak has put enormous pressure on Russia's medical community. While state media hails some of them as heroes, doctors and nurses interviewed by The Associated Press say they are fighting both the virus and a system that fails to support them.

They have decried shortages of protective equipment, and many say they have been threatened with dismissal or even prosecution for going public with their complaints. Some have quit and a few are suspected to have killed themselves.

Government officials insist the shortages are isolated and not widespread.

Antipathy toward the medical profession is widespread in Russia, said social anthropologist Alexandra Arkhipova, who studies social media posts peddling virus conspiracy theories. More than 100 theories she studied say doctors diagnose COVID-19 cases so they can get more money; others say they help the government cover up the outbreak.

“It’s a crisis of trust that the epidemic underscored,” she said. “I haven’t seen this attitude anywhere else.”

Trust in government institutions has always been low in Russia, according to opinion polls, and most of its hospitals are state-run.

Russia is struggling in the pandemic, with over 300,000 infections and 2,972 deaths. The government has disputed critics who have questioned the relatively low number of fatalities.

Official statements and news reports in more than 70 Russian regions show that at least 9,479 medical workers have been infected with the virus in the past month, and more than 70 have died. Health care workers believe the death toll to be much higher and they have compiled a list of more than 250.

Dr. Irina Vaskyanina said at least 40 workers are infected at a hospital in Reutov, outside Moscow, where she headed a department handling blood transfusions.

She also said insults and threats from superiors became common after she complained about working conditions to her bosses, to law enforcement and even to President Vladimir Putin.

“I handed in my notice," Vaskyanina said. “They're not letting me do my job. I love my job and I want to keep doing it, but I can't go on like this.”

She said 13 of her 14 colleagues have also quit.

Dr. Tatyana Revva, an intensive care specialist in the town of Kalach-on-Don, was summoned by police for questioning and slapped with disciplinary action after recording a video about equipment shortages. The hospital's head reported her to a prosecutor for “spreading false information” — an offense punishable by fines of up to $25,000 or a prison term.

“I am one reprimand away from being fired,” Revva told AP.

Dr. Oleg Kumeiko, head of her hospital, did not respond to requests for comment.

“I don’t understand why they treat us like we’re expendable,” said Nina Rogova, a nurse in the Vladimir region 200 kilometers (120 miles) east of Moscow. She is recovering from the virus after getting it at work and she says she is being threatened with dismissal after she told local media about a lack of protective gear.

Doctors in the southern region of Chechnya who complained about equipment shortages later had to retract their statements as a “mistake” and apologize on TV. The predominantly Muslim region's leader, Ramzan Kadyrov, has a reputation for stifling dissent, and he has demanded they be fired.

Adding to the frustration is pay. Health workers say they haven't gotten bonuses the government promised them for working with coronavirus patients. In early April, Putin personally promised generous bonuses to monthly salaries — about $1,100 for doctors, $680 for nurses and paramedics, and $340 for orderlies.

A month later, social media was filled with photos of pay slips reflecting bonuses from 10 to 100 times smaller than promised. Dr. Yevgeniya Bogatyryova, a Moscow-area paramedic, told AP the April bonuses varied from $2 to $120. “They’re calculating the time ambulance doctors spend with a coronavirus patient and pay by the hour, apparently,” Bogatyryova said.

More than 110,000 people signed an online petition demanding the government keep its promise. Dozens of paramedics protested in the Nizhny Novgorod region 400 kilometers (240 miles) east of Moscow, and scores more from Siberia to southern Russia made videos demanding the bonuses.

“Whoever we ask in our management, our superiors, they say, ‘Putin promised you (bonuses), so Putin should pay you,’” Natalia Salomatova, an orderly at a hospital in the Siberian city of Chita, told the AP. April bonuses for her colleagues ranged from the equivalent of 41 cents to $6.86. Salomatova herself didn't receive any.

Only after Putin went on TV twice last week and angrily demanded that officials pay what was promised did medical workers in some regions start getting the payments.

“Makes you wonder: Who should we protect the medics from, the infection or the administrators?” said Arkhipova, the social anthropologist.

Russia's Health Ministry did not immediately respond to a request for comment.

Reports of health care workers resigning are surfacing. Over 300 quit in the western Kaliningrad region two weeks ago, dozens of paramedics reportedly resigned in the Siberian city of Novosibirsk in May and 40 workers gave notice at a hospital in the Vladimir region.

That could further cripple Russia's health care system, already impaired by a widely criticized reform that closed half of its 10,000 hospitals in 20 years, with thousands of layoffs. In December, Deputy Prime Minister Tatyana Golikova called the reform “horrible” and said it significantly affected the quality and the accessibility of health care.