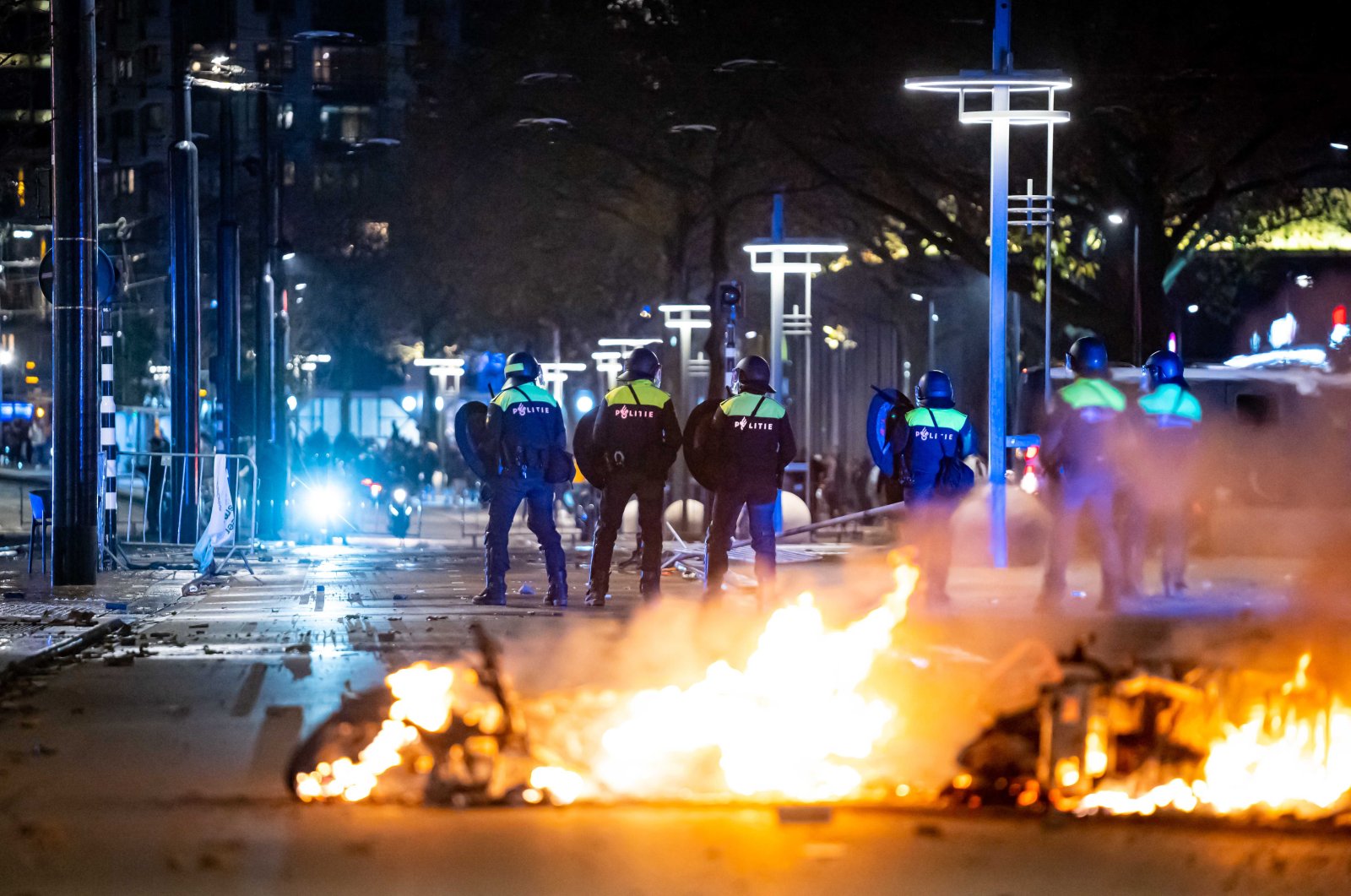 Police stand near burning objects after a protest against the '2G policy' turned into riots, with protesters setting fires in the street and destroying police cars and street furniture, Rotterdam, Netherlands, Nov. 19, 2021. (EPA Photo)
by REUTERS Nov 20, 2021 2:28 pm
RECOMMENDED

Mayor Ahmed Aboutaleb told reporters in the early hours of Saturday morning that “on a number of occasions the police felt it necessary to draw their weapons to defend themselves” as rioters rampaged through the port city's central shopping district, setting fires and throwing rocks and fireworks at officers.

“They shot at protesters, people were injured,” Aboutaleb said. He did not have details on the injuries. Police also fired warning shots.

A number of police officers also were injured in the violence and officers arrested dozens of people and expect to arrest more after studying video footage from security cameras, Aboutaleb said.

Photos from the scene showed at least one police car in flames and another with a bicycle slammed through its windshield.

Riot police and a water cannon restored calm after midnight.

It was one of the worst outbreaks of violence in the Netherlands since coronavirus restrictions were first imposed last year. In January, rioters also attacked police and set fires on the streets of Rotterdam after a curfew came into force.

“The riots and extreme violence against police officers, riot police and firefighters last night in Rotterdam are disgusting to see,” he said in a statement.

“Protesting is a great right in our society, but what we saw last night is simply criminal behavior. It has nothing to do with demonstrating,” he added.

Police units from around the country raced to Rotterdam to help bring Friday night's situation under control. Local media reported that gangs of soccer hooligans were involved in the rioting.

Video from social media shown on Dutch broadcaster NOS appeared to show one person being shot in Rotterdam, but there was no immediate word on what happened.

Police said in a tweet that it was “still unclear how and by whom” that person was apparently shot.

An independent investigation into the shootings by police was opened, as is the case whenever Dutch police use their weapons.

The government has said it wants to introduce a law that would allow businesses to restrict the country’s coronavirus pass system to only people who are fully vaccinated or who have recovered from COVID-19 – a move that would exclude unvaccinated or unrecovered people who test negative.

The country has seen record numbers of infections in recent days, and a new partial lockdown came into force a week ago.

“The center of our beautiful city has this evening transformed into a war zone,” it said. “Rotterdam is a city where you can disagree with things that happen but violence is never, never, the solution.”