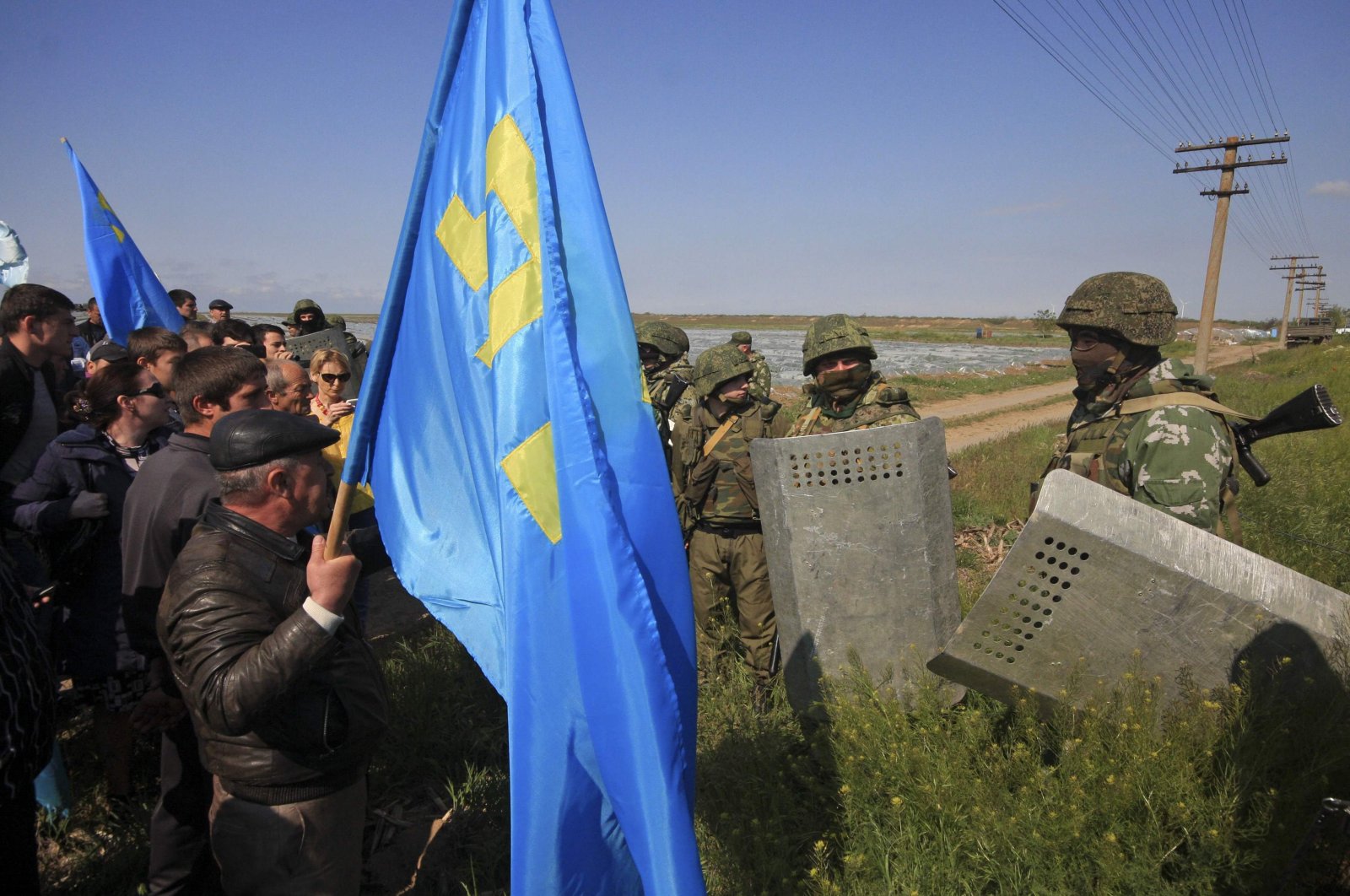 Russian servicemen attempt to block the way for Crimean Tatars to cross a checkpoint connecting Crimea and the Kherson region to meet with former chairman of the Mejlis of the Crimean Tatars, Mustafa Dzhemilev, near the city of Armyansk, Crimea, May 3, 2014. (Reuters Photo)
by Compiled from Wire Services Jun 18, 2020 3:46 pm
RECOMMENDED

European Union leaders are expected on Friday to back extending the bloc's main economic sanctions against Russia over the turmoil in Ukraine until the end of January 2021, diplomatic sources and officials said.

The EU hit Russia's energy, financial and arms sectors after Moscow annexed Crimea from Ukraine in 2014 and went on to back rebels fighting Kyiv government troops in the east of the ex-Soviet republic.

The curbs are now in place until the end of July, and the 27 national EU leaders holding a virtual meeting on Friday are expected to pave the way for another six-month extension, which would be formalized later this month, the sources said.

Separately on Thursday, the EU prolonged its ban on doing business with the annexed Crimea until mid-2021. A third batch of EU sanctions blacklists people and firms the bloc sees as instrumental in spreading havoc in the former Russian satellite.

"The Council today decided to renew the sanctions introduced in response to the illegal annexation of Crimea and Sevastopol by the Russian Federation until 23 June 2021," the EU member states said in a statement.

"The EU still does not recognize the illegal annexation of Crimea and Sevastopol by the Russian Federation and continues to condemn this violation of international law."

While some countries including Italy and Hungary would want to see a revival of economic ties with Russia, the bloc's dovish wing has not had the upper hand recently as the EU was unnerved by what it has seen as Moscow's disinformation over the coronavirus.

U.S. President Donald Trump has also recently called for Russia to be allowed back into the Group of 7 club of leading economies, a seat Moscow lost over the conflict in Ukraine.

Following the Russian annexation of the Crimean peninsula on March 18, 2014, the fall of Crimea into the hands of Vladimir Putin's Russia was interpreted as a frightening reality for Crimean Tatars as it signaled an end to the freedom they enjoyed within Ukrainian territory with regard to Russian provocations against the Crimean Tatar minority in the annexed territory.

Many Crimean Tatars, which constitute 12% of Crimea's largely ethnic Russian population of about 2 million, have felt insecure due to the possible return of Stalinist-like repression.

More than 13,000 people have been killed since the Moscow-backed insurgency broke out in eastern Ukraine in April 2014 following the annexation.