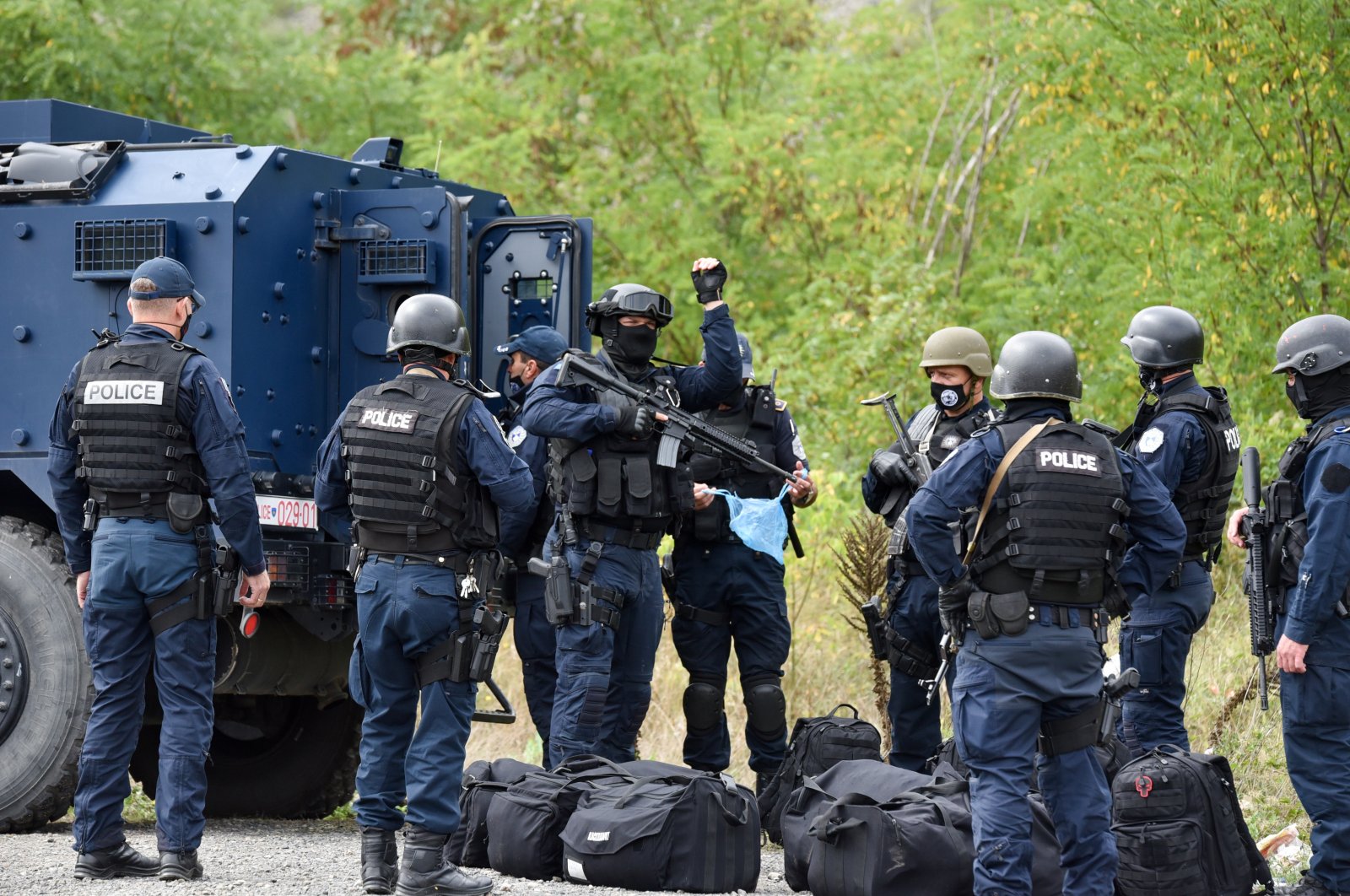 Kosovo special police with armored vehicles are pictured as hundreds of Kosovo Serbs protest against a government ban on entry of vehicles with Serbian registration plates in Jarinje, Kosovo, Sept. 21, 2021. (Reuters Photo)
by Anadolu Agency Sep 27, 2021 10:29 am
RECOMMENDED

The European Union and NATO urged Serbia and Kosovo on Sunday to de-escalate tensions in northern Kosovo after Pristina banned vehicles with Serbian license plates from entering the country.

"I spoke to @avucic of #Serbia and @albinkurti of #Kosovo about the need to de-escalate in the north of Kosovo. It's vital both Belgrade & Pristina show restraint & return to dialogue," NATO Secretary-General Jens Stoltenberg said on Twitter, referring to Serbian President Aleksandar Vucic and Kosovo Prime Minister Albin Kurti, respectively.

"@NATO_KFOR's mandate remains to ensure a safe & secure environment & freedom of movement for all," he added.

The Kosovo Force, or KFOR, is a NATO-led peacekeeping mission operating in Kosovo since June 1999 to build peace and stability in the area.

Meanwhile, EU Foreign Policy Chief Josep Borrell said in a statement that "Serbia and Kosovo need to unconditionally de-escalate the situation on the ground by immediately withdrawing special police units and the dismantling of roadblocks."

"Any further provocations or unilateral and uncoordinated actions are unacceptable," Borrell added. To defuse the situation and agree on the way forward, the two countries must find solutions, he said. "The EU will actively support these efforts. Both Kosovo and Serbian leaders are fully responsible for any risks to the safety and well-being of local communities in both Kosovo and Serbia."

He also highlighted his close contacts with Stoltenberg, adding: "KFOR plays a key role in supporting regional stability in the Western Balkans."

Tensions between Kosovo and Serbia

The ban early Monday on vehicles with Serbian license plates has created tensions between Serbia and Kosovo.

Kosovo's Interior Ministry said vehicles with Serbian license plates are not allowed to cross the border and drivers would need to have a temporary plate.

The ministry pointed out that a free traffic circulation agreement signed between the two countries in 2016 expired on Sept. 15. Temporary license plates were placed on windshields and rear windows of vehicles while original plates were covered. Prime Minister Kurti said the decision was not aimed at Serbs in Kosovo.

"Our aim is not provocation or instability. Everything that is done is lawful. We are only implementing what is required of an expired agreement," he said.

But President Vucic said Pristina has violated every agreement up to now.

The former Serbian province of Kosovo declared independence in February 2008 and is recognized by more than 100 countries, including the U.S., U.K., France, Germany and Turkey.

Belgrade, however, still claims Kosovo as a breakaway province.