EU piles pressure on Poland in spat over legal supremacy 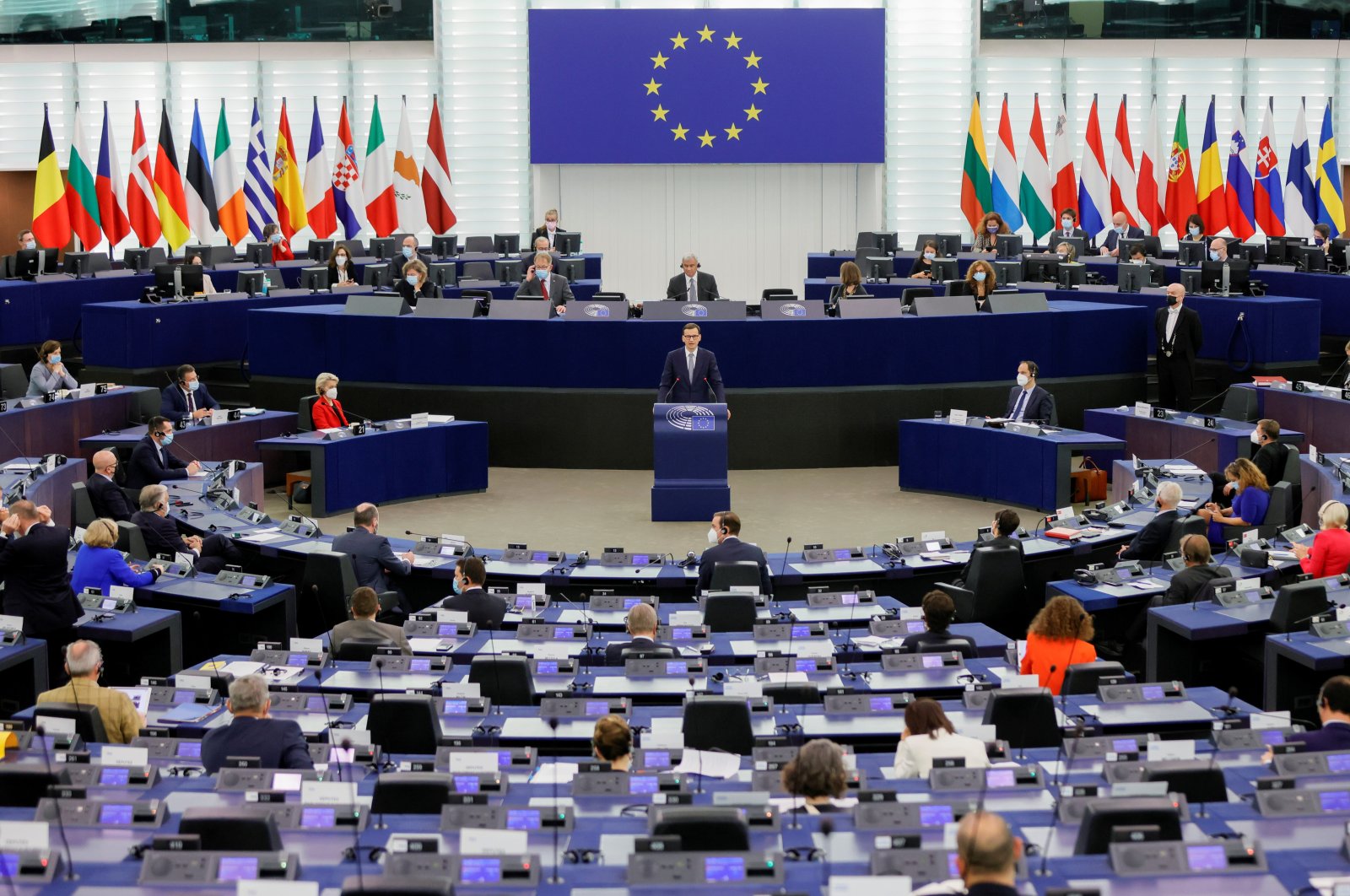 Polish Prime Minister Mateusz Morawiecki delivers a speech during a debate on Poland's challenge to the supremacy of EU laws at the European Parliament in Strasbourg, France, Oct. 19, 2021. (Reuters Photo)
by REUTERS Oct 21, 2021 11:13 am
RECOMMENDED

European Union leaders will pressure their Polish counterparts Thursday over a court ruling that questioned the primacy of EU laws in a sharp escalation of ideological battles that risk precipitating a new crisis for the bloc.

"Poland puts itself in danger," Clement Beaune said before national leaders of the bloc's 27 member countries convened in Brussels. "Eventually, if dialogue does not work, we could resort to various types of sanctions," he added. Poland views this as "blackmail."

The European Parliament was voting on a resolution later in the day demanding the bloc cut EU funds for Poland for purportedly violating "democratic principles."

Polish Prime Minister Mateusz Morawiecki is set to defend in front of his peers the Oct. 7 ruling by Poland's Constitutional Tribunal stating that elements of EU law were incompatible with the country's constitution. Morawiecki has already come under fire from EU lawmakers this week and the head of the European Commission said the challenge to the unity of the European legal order would not go unanswered.

This, as well as other policies introduced by his ruling Law and Justice (PiS) party, are set to cost Poland money.

With the ruling, the PiS raised the stakes in years of increasingly bitter feuds with the EU over democratic principles from the freedom of courts and media to the rights of women, migrants and LGBT people.

A senior EU diplomat said such policies were "not tenable in the European Union."

The commission has for now barred Warsaw from tapping into 57 billion euros ($66 billion) of emergency funds to help its economy emerge from the COVID-19 pandemic. Warsaw also risks more penalties from the bloc's top court.

Sweden, Finland and Luxembourg are also among those determined to bring Warsaw into line and have stepped up their criticism since PiS came to power in 2015 in Poland, the largest ex-communist EU country of 38 million people.

For the EU, the latest twist in feuds with the euroskeptic PiS also comes at a sensitive time as it grapples with the fallout from Brexit.

The bloc – without Britain – last year achieved a major leap in integration in agreeing on joint debt guarantees to raise 750 billion euros for post-pandemic economic recovery projects, overcoming stiff resistance from wealthy states such as the Netherlands.

Morawiecki has dismissed the idea of leaving the EU in a "Polexit." Support for membership remains very high in Poland, which has benefited enormously from funding coming from the bloc it joined in 2004.

But Warsaw – backed by Hungarian Prime Minister Viktor Orban – wants to return powers to national capitals and has lashed out at what it says are excessive powers held by the commission.

While many have grown increasingly frustrated at failed attempts to convince Warsaw to change tack, German Chancellor Angela Merkel has long warned against isolating Poland and said ideological rows were better not settled in courts.

Her sway, however, is weakened as the veteran of more than 100 summits during her 16 years in power visits Brussels for what may be her last gathering of EU leaders before she hands over to a new German chancellor.

Beyond Poland, the leaders will also lock horns over how to respond to a sharp spike in energy prices, discuss migration, their fraught relationship with Belarus and the COVID-19 pandemic.