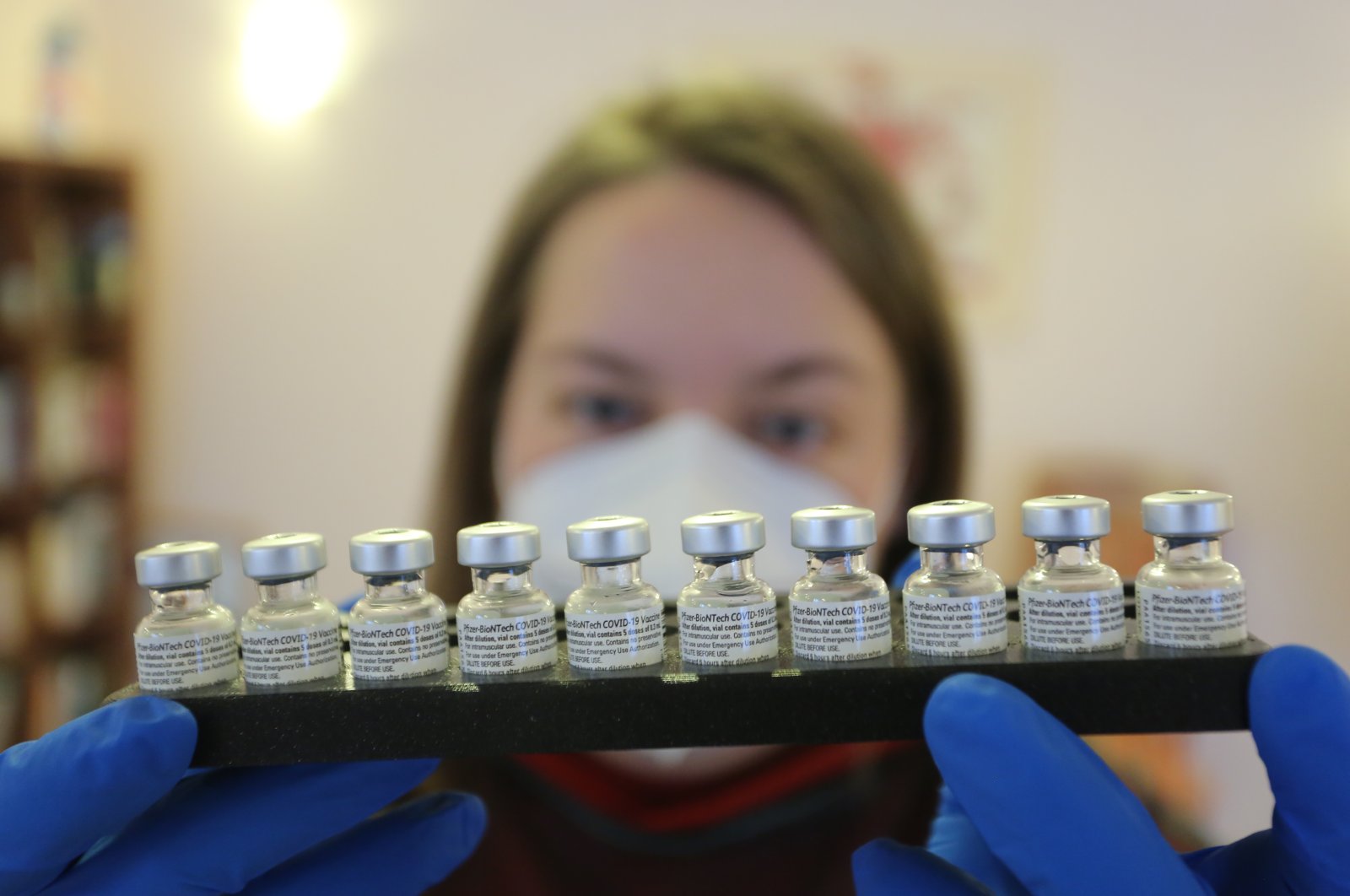 A member of a mobile vaccination team holds a tray of doses of the BioNtech-Pfizer vaccine in Halberstadt, Germany, Friday, Jan.15, 2021. (AP Photo)
by ASSOCIATED PRESS Jan 15, 2021 6:09 pm
RECOMMENDED

Six European Union health ministers signed a letter to the European Commission on Friday to express "severe concern" over delivery delays for the coronavirus vaccine developed by BioNTech and Pfizer after the U.S. pharmaceutical company confirmed Friday it will temporarily reduce deliveries to Europe while it upgrades production capacity to 2 billion doses per year.

Ministers from Denmark, Estonia, Finland, Latvia, Lithuania and Sweden said in their letter that the situation was "unacceptable" and "decreases the credibility of the vaccination process".

"This temporary reduction will affect all European countries,” a spokesperson for Pfizer Denmark said in a statement to The Associated Press (AP).

Line Fedders said that to meet the new 2 billion dose target, Pfizer is upscaling production at its plant in Puurs, Belgium, which "presupposes adaptation of facilities and processes at the factory which requires new quality tests and approvals from the authorities.”

"As a consequence, fewer doses will be available for European countries at the end of January and the beginning of February,” she said. Germany’s Health Ministry said Friday Pfizer had informed the European Commission, which was responsible for ordering vaccines from the company, that it won’t be able to fulfill all of the promised deliveries in the coming three to four weeks.

The ministry said German officials took note of the unexpected announcement by the Commission ” with regret” because the company had made binding delivery commitments by mid-February.

"The federal and state governments expect the EU Commission to provide clarity and certainty as soon as possible in negotiations with Pfizer about further deliveries and delivery dates,” the statement said.

The Commission sealed the vaccine deals on behalf of all 27 member states, but is not responsible for the timetable and deliveries. Asked Friday whether Brussels has been informed by Pfizer about delays in the EU, Commission health policy spokesperson Stefan de Keersmaecker said all questions on production and production capacity should be directed to the company.

"The Commission stands ready to support and facilitate contacts between the company and member states whenever needed,” he said. De Keersmaecker said deliveries are made on the basis of purchase orders and specific contracts that are concluded between the member states and the companies.

"The specificities of these arrangements are laid down in these purchase orders or contracts,” he said. The Commission has secured up to 600 million extra doses of the Pfizer vaccine that's produced in partnership with Germany's BioNTech.

Norwegian authorities also said Friday they had been notified by Pfizer about the reduction that will start next week as the company raises its annual dose target from the current 1.3 billion.

"We had predicted 43,875 vaccine doses from Pfizer in week 3. Now it seems that we get 36,075 doses,” said Geir Bukholm, director of infection control at the Norwegian Institute of Public Health.

”The stock we now have will be able to compensate for a reduction in the planned deliveries for a few weeks ahead if there is a need for this,” he said. In Finland, broadcaster YLE said the delay would cause domestic delivery problems at the end of January and the beginning of February.