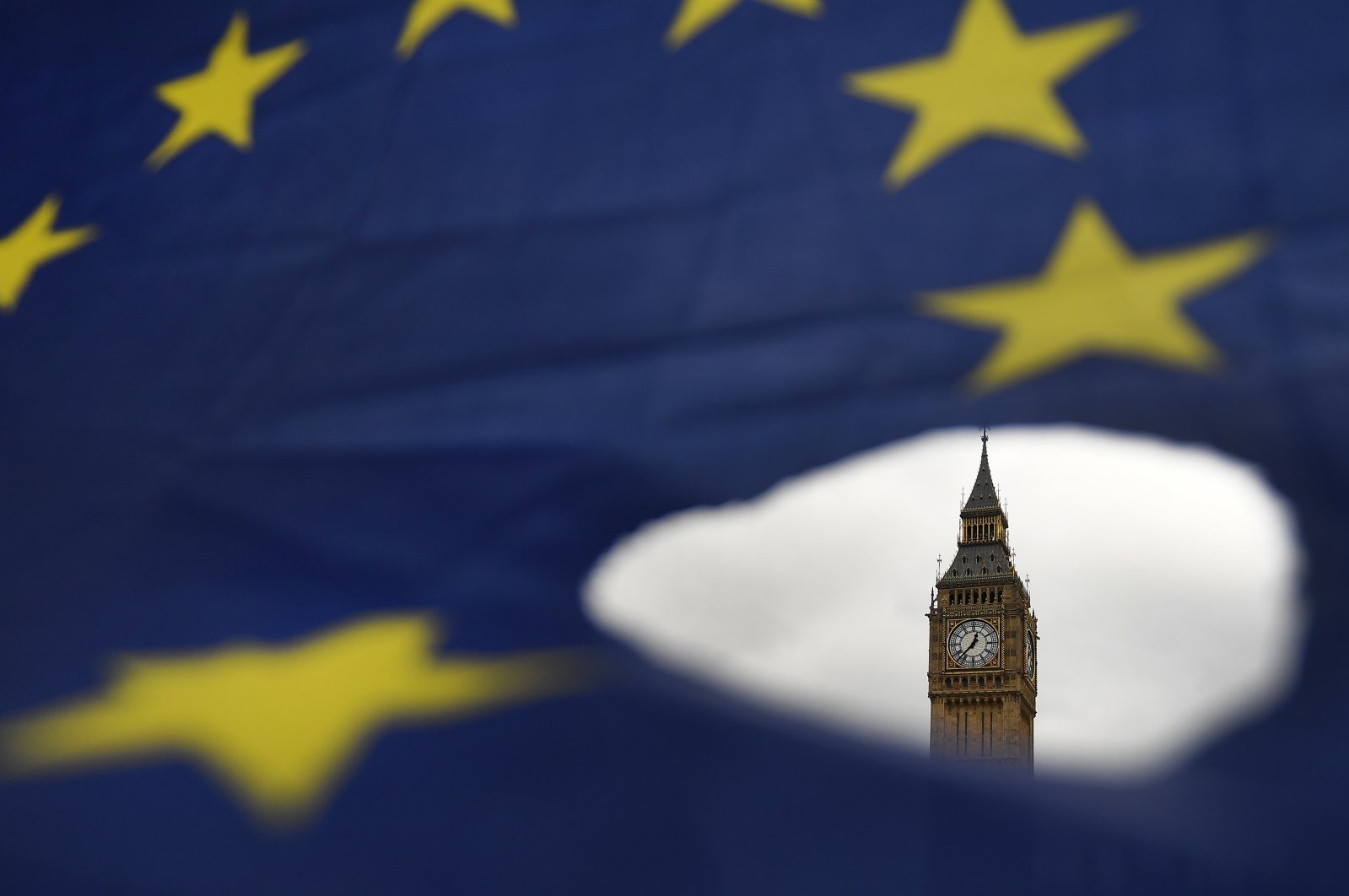 A European Union flag during a demonstration against Brexit outside the Houses of Parliament in London, Britain, March 29, 2017. (EPA-EFE Photo)
by ASSOCIATED PRESS Dec 24, 2020 10:27 am
RECOMMENDED

European Union and British negotiators worked through the night and right into Christmas Eve to put the finishing touches on a trade deal that should avert a chaotic economic break between the two sides on New Year’s Day.

After resolving the remaining fair-competition and fisheries issues on Wednesday, negotiators combed through hundreds of pages of legal text that should become the provisional deal for a post-Brexit relationship after nine months of talks.

Sources on both sides said the long and difficult negotiations were on the cusp of being wrapped up as negotiators, holed up at EU headquarters in Brussels with a stack of pizzas, worked to deliver the text to their leaders at dawn on Thursday.

Everyone awaited early morning appearances by Prime Minister Boris Johnson and European Commission President Ursula von der Leyen to announce the deal. The agreement then goes to the 27 EU capitals seeking unanimous approval, as well as the blessing of the EU and British parliaments.

Despite the breakthrough, key aspects of the future relationship between the 27-nation bloc and its former member remain uncertain. But it leaves the mutually dependent but often fractious U.K.-EU relationship on a much more solid footing than a disruptive no-deal split.

Johnson will now claim to have delivered on the promise that won him a resounding election victory a year ago: Get Brexit Done.

Even with a deal, trade between Britain and the EU will face customs checks and some other barriers on Jan. 1, when the U.K. leaves the bloc’s single market and customs union. A trade deal would avert the imposition of tariffs and duties that could cost both sides billions in trade and hundreds of thousands of jobs. Britain withdrew from the EU on Jan. 31, and an economic transition period expires on Dec. 31.

Johnson has always insisted the U.K. will “prosper mightily” even if no deal is reached and the U.K. has to trade with the EU on World Trade Organization (WTO) terms from Jan. 1.

But his government has acknowledged that a chaotic exit is likely to bring gridlock at Britain’s ports, temporary shortages of some goods and price increases for staple foods. Tariffs will be applied to many U.K. exports, including 10% on cars and more than 40% on lamb, battering the U.K. economy as it struggles to rebound from the impact of the coronavirus pandemic.

Over the past few days, Johnson and von der Leyen have been drawn more and more into the talks, speaking by phone in a bid to unblock negotiations that have dragged on for months, hampered by the coronavirus pandemic and by the two sides’ opposing views of what Brexit entails.

Rumors of a pre-Christmas trade deal surfaced in recent days based on progress on the main outstanding issues: fair competition, resolution of future disputes and fishing.

The EU has long feared that Britain would undercut the bloc’s social, environmental and state aid rules to be able to gain an unfair edge with its exports to the EU. Britain has said that having to meet EU rules would undercut its sovereignty.

A compromise was finally reached on those “level playing field” issues, leaving the economically minor but hugely symbolic issue of fish as the final sticking point. Maritime EU nations are seeking to retain access to U.K. waters where they have long fished, and Britain insisting it must exercise control as an “independent coastal state.”

A huge gap between the two sides on fishing was gradually narrowed until it appeared, at last, bridgeable.

Johnson’s large majority in Parliament should ensure the agreement passes, but any compromises will be criticized by hard-line Brexit supporters in his Conservative Party. The party’s euroskeptic European Research Group said it would carefully scrutinize any deal “to ensure that its provisions genuinely protect the sovereignty of the United Kingdom after we exit the transition period at the end of this year.”

The European Parliament has warned it’s now too late for it to approve the deal before Jan. 1, but an agreement could provisionally be put in place and approved by EU legislators in January.

Businesses on both sides are clamoring for a deal that would save tens of billions in costs.

While both sides would suffer economically from a failure to secure a trade deal, most economists think Britain would take a greater hit, because it is smaller and more reliant on trade with the EU than the other way around.