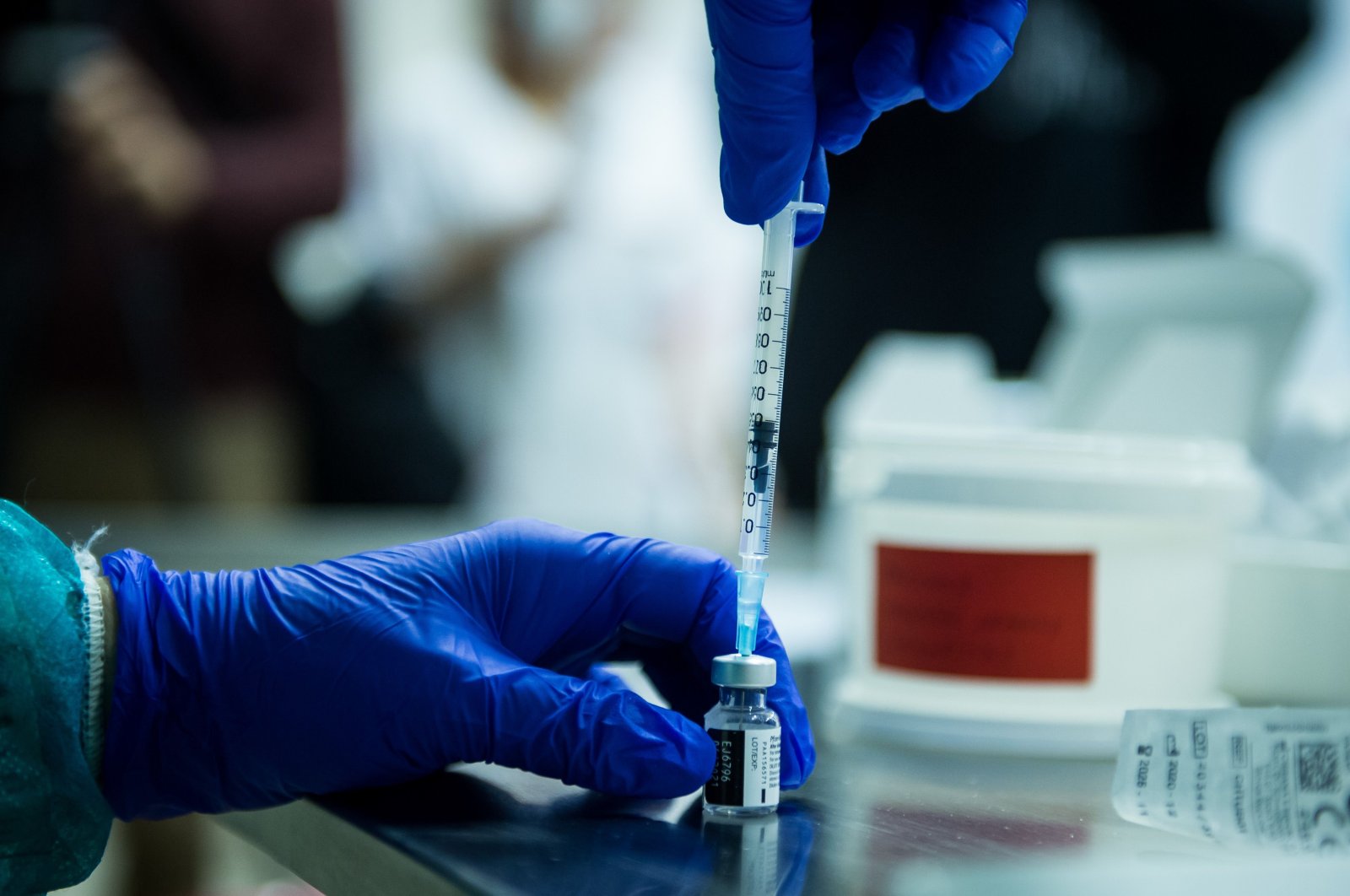 A medic pricks with a syringe in a vaccine vial against the novel coronavirus COVID-19 as first people receive a vaccination on Dec. 26, 2020 in the faculty hospital in Nitra, western Slovakia.(AFP Photo)
by Daily Sabah with AP Dec 27, 2020 11:17 am

As nations in the European Union officially kicked off a coordinated effort Sunday to give COVID-19 vaccinations to some of the most vulnerable among their nearly 450 million people, marking a moment of hope in the continent's battle against the worst public health crisis in a century, questions about the new genetic mutations of the virus still remain unanswered.

Shots were administered Sunday morning to health care workers, the elderly and some leading politicians to reassure the public that the vaccinations are safe.

In Prague, Czech Prime Minister Andrej Babis received his shot at dawn and asserted, "There’s nothing to worry about.” In Rome, five doctors and nurses wearing white scrubs sat in a semicircle at Rome’s Spallanzani infectious diseases hospital to receive their doses.

"Getting vaccinated is an act of love and responsibility toward the collective whole,” Claudia Alivernini, a 29-year-old Spallanzani nurse, said on the eve of being the first to receive the shot in Italy, which has Europe's worst virus toll at more than 71,000 dead.

Italian Health Minister Roberto Speranza, speaking outside the hospital, said the coordinated EU rollout was a sign of hope for the continent but that people still cannot let down their guard for several months more. "We still have difficult months ahead,” he said. "It’s a beautiful day, but we still need to exercise caution ... this vaccine is the true path to close out this difficult season.”

The vaccines, developed by Germany's BioNTech and American drugmaker Pfizer, started arriving in super-cold containers at EU hospitals on Friday from a factory in Belgium. The EU has seen some of the world’s earliest and hardest-hit virus hot spots, including Italy and Spain. Other EU countries, like the Czech Republic, were spared the worst early on only to see their health care systems nearly collapse in the fall.

Altogether, the EU’s 27 nations have recorded at least 16 million coronavirus infections and more than 336,000 deaths, huge numbers that experts agree understates the true toll of the pandemic due to missed cases and limited testing.

The campaign should ease frustrations that were building up, especially in Germany, as Britain, Canada and the United States kicked off their inoculation programs with the same vaccine weeks earlier.

As it turned out, some EU immunizations began a day early in Germany, Hungary and Slovakia. The operator of a German nursing home where dozens of people were vaccinated Saturday, including a 101-year-old woman, said: "Every day that we wait is one day too many.”

Each country is deciding on its own who will get the first shots. Spain, France and Germany, among others, are vowing to put the elderly and residents in nursing homes first. Poland is also prioritizing doctors, nurses and others on the front lines of fighting the virus.

The central European nation was largely spared the surge that hit Western Europe in the spring but has seen high daily infections and deaths this fall. EU leaders are counting on the vaccine rollout to help the bloc project a sense of unity in a complex lifesaving mission after it faced a year of difficulties in negotiating a post-Brexit trade deal with Britain.

"It’s here, the good news at Christmas,” said German Health Minister Jens Spahn. "This vaccine is the decisive key to end this pandemic ... it is the key to getting our lives back.”

Among politicians who plan to get virus shots on Sunday as a way of promoting a wider acceptance of vaccinations are Slovakian President Zuzana Caputova and Bulgarian Health Minister Kostadin Angelov.

Meanwhile, the first cases of a new virus variant that has been spreading rapidly around London and southern England have now been detected in France and Spain. The new variant, which British authorities said is much more easily transmitted, has caused European countries, the United States and China to put new restrictions on travel for people from Britain. Thousands of trucks backed up in southern England, but the bottleneck eased after France lifted a 48-hour entry ban for drivers with a negative coronavirus test. South Africa has detected a virus mutation in some infected people but on Friday denied British claims that its strain was more infectious or dangerous than the one originating in the U.K.

The German pharmaceutical company BioNTech is confident that its coronavirus vaccine works against the new U.K. variant but said further studies are needed to be completely certain. The European Medicines Agency (EMA) on Jan. 6 will be considering approving a second coronavirus vaccine, this one by Moderna, which has already been approved for use in the United States.

The EU's eastern neighbor Russia began vaccinations on Dec. 5 with its domestic drug Sputnik V, which is still in its third phase of clinical trials. China has already given the go-ahead for emergency use of some of their vaccines, even though none have yet been formally approved.

A total of 16 vaccines are in the final stage of development, including those already on the market, the World Health Organization (WHO) said. It also warned Saturday that the current pandemic would not be the last.

In a video message ahead of the first International Day of Epidemic Preparedness on Sunday, WHO chief Tedros Adhanom Ghebreyesus said it was time to learn the lessons from the COVID-19 pandemic.

"For too long, the world has operated on a cycle of panic and neglect," he said. "We throw money at an outbreak, and when it's over, we forget about it and do nothing to prevent the next one. This is dangerously short-sighted, and frankly difficult to understand."