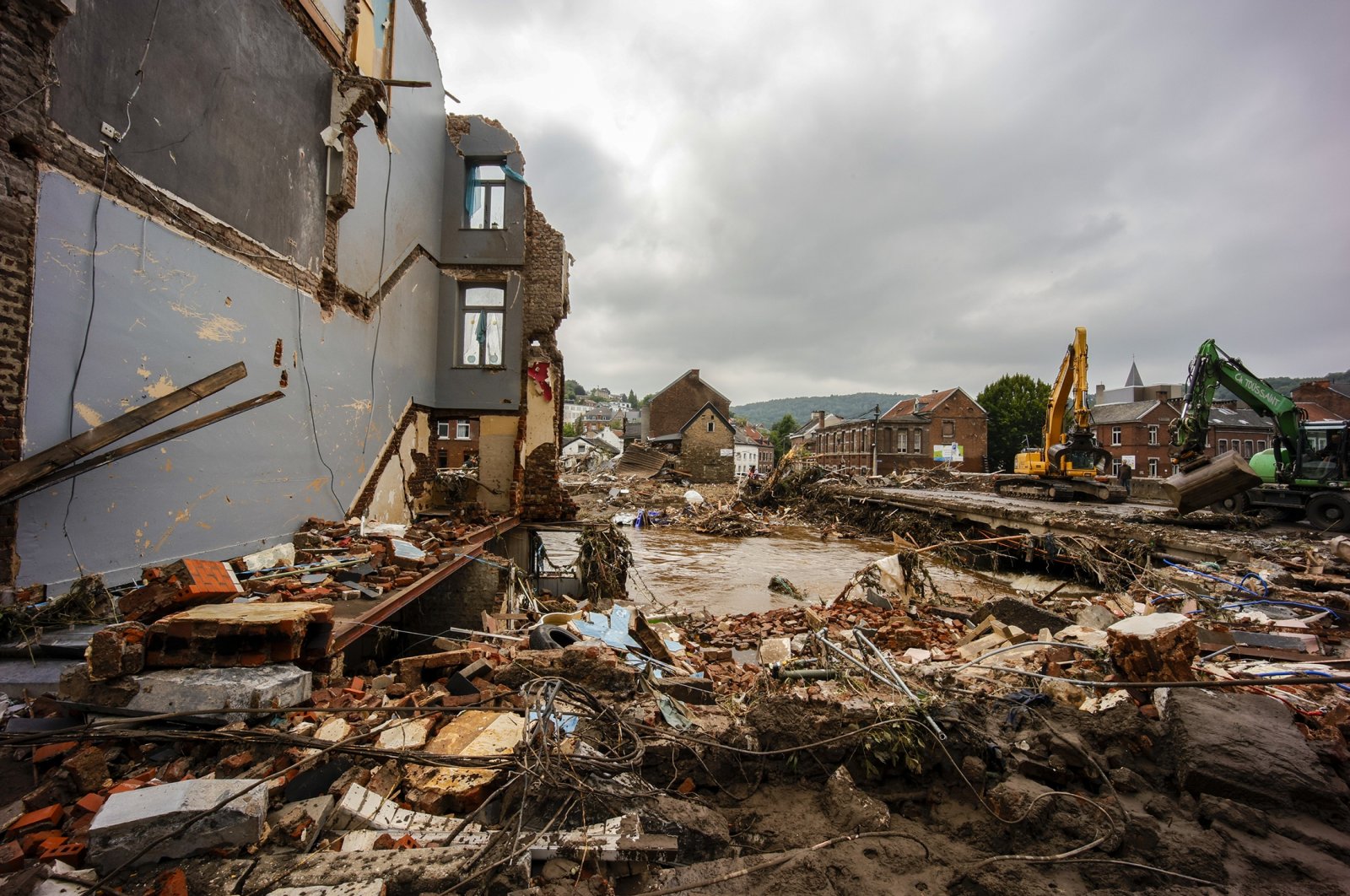 The number of casualties from severe flooding in Western Europe climbed above 180 after rescuers began digging deeper into the debris left by the retreating waters.

Police put the toll from the hard-hit Ahrweiler area of western Germany's Rhineland-Palatinate state at more than 110 and said they feared the number may still rise. In neighboring North Rhine-Westphalia (NRW) state, Germany's most populous, 45 people were confirmed dead, including four firefighters. And Belgium has confirmed 27 casualties.

Chancellor Angela Merkel visited Schuld, a village near Ahrweiler that was devastated by the flooding, later Sunday. Her visit comes after Germany's president went to the area Saturday and made clear that it will need long-term support. Wearing hiking boots and offering pandemic-safe fist bumps to rescue workers, the veteran leader walked through the village of Schuld in Rhineland-Palatinate state, one of the two hardest-hit regions in western Germany.

Merkel said that she was horrified by the "surreal" devastation in the flood-ravaged region of Germany. She listened to the accounts of residents where the swollen Ahr river swept away houses and left debris piled high in the streets.

"It is a surreal, eerie situation," a visibly shaken Merkel told reporters, as she pledged quick aid to rebuild. "It is shocking. I can almost say that the German language doesn't have words for the destruction that's been wreaked."

"The sum of all events that we are witnessing in Germany and the forces with which they occur all suggest... that it has something to do with climate change," she told residents of Adenau in the German state of Rhineland-Palatinate. "We have to hurry, we have to get faster in the fight against climate change."

According to The Associated Press (AP), German Finance Minister Olaf Scholz said he will propose a package of immediate aid at a Cabinet meeting Wednesday, telling the Bild am Sonntag newspaper that more than 300 million euros ($354 million) will be needed. And he said that officials must start setting up a rebuilding program which, from experience with previous flooding, will be in the billions of euros.

The disaster has increasingly taken on political overtones in the country, which head to the polls on Sept. 26 for a general election that will mark the end of Merkel's 16 years in power. With experts saying climate change is making extreme weather events like these more likely, candidates vying to succeed the veteran leader have called for more climate action.

Armin Laschet, the premier of hard-hit NRW state and frontrunner in the race for the chancellery, said efforts to tackle global warming should be "sped up."

But Laschet, who heads Merkel's Christian Democratic (CDU) party currently leading in opinion polls, raised eyebrows Saturday when he was filmed laughing in the devastated town of Erftstadt in NRW, where a landslide was triggered by the floods. In the footage, Laschet could be seen chatting and joking in the background as President Frank-Walter Steinmeier gave a statement expressing his sympathies to grieving families.

"Laschet laughs while the country cries," wrote the top-selling Bild daily. Laschet later apologized on Twitter for the "inappropriate" moment, according to Agence France-Presse (AFP).

The scale of the flood impact was gradually becoming clear in Germany, with damaged buildings being assessed, some of which will have to be demolished, and efforts are underway to restore gas, electricity and telephone services. In some areas, soldiers used armored vehicles to clear the debris clogging streets. In NRW, divers were sent in to search submerged homes and vehicles.

Local authorities in NRW and Rhineland-Palatinate said dozens of people remain unaccounted for across both states. They have stressed, however, that disruption to communication networks made a precise assessment difficult, and the real number of missing could be lower.

"I've lived here my whole life, I was born here, and I've never seen anything like it," said Gregor Degen, a baker in the devastated spa town of Bad Neuenahr-Ahrweiler, near Schuld.

Although rain has stopped in the worst-affected areas of Germany, Belgium and the Netherlands, storms and downpours have persisted in other parts of western and central Europe. There was flooding Saturday night in the German-Czech border area, across the country from where last week's floods hit, and in Germany's southeastern corner and over the border in Austria.

Some 65 people were evacuated in Germany's Berchtesgaden area after the Ache River swelled. At least one person was killed.

A flash flood swept through the nearby Austrian town of Hallein late Saturday, but there were no reports of casualties. Heavy rain and storms caused serious damage in several parts of Austria.

Climate scientists say the link between extreme weather and global warming is unmistakable and the urgency to do something about climate change undeniable. Scientists cannot yet say for sure whether climate change caused the flooding, but they insist that it certainly exacerbates the extreme weather that has been on show around the world.

"Europe is with you," von der Leyen tweeted afterward. "We are with you in mourning and we will be with you in rebuilding."