More than 100 dead in Germany, Belgium as floods pound Europe 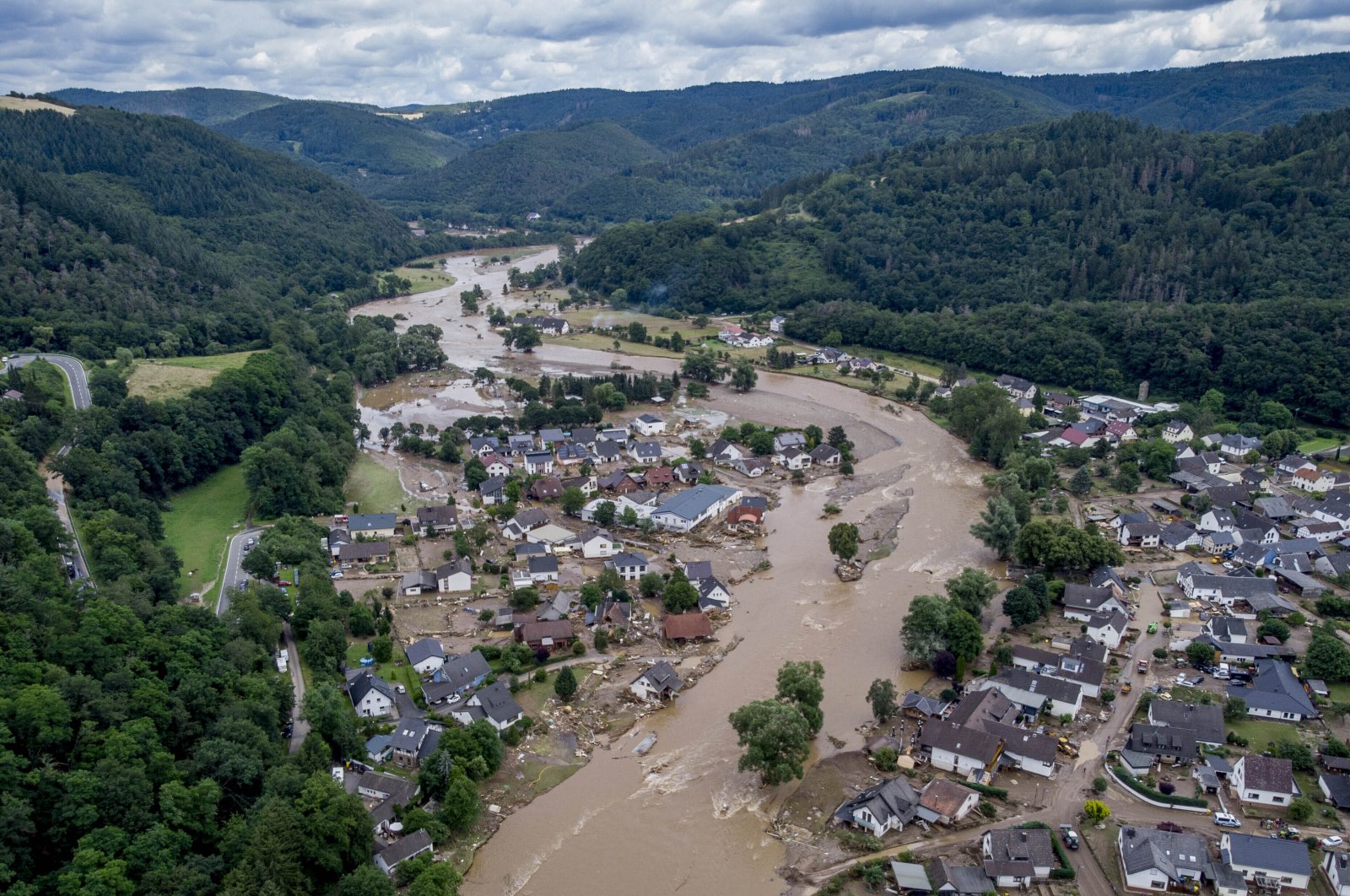 More than 100 people have died and dozens were missing as heavy flooding in Germany and Belgium turned streams and streets into raging torrents that swept away cars and caused houses to collapse.

Among those killed were nine residents of an assisted living facility for people with disabilities and two firefighters involved in rescue efforts across the region.

"I grieve for those who have lost their lives in this disaster,” German Chancellor Angela Merkel said during a visit to Washington, expressing shock at the scope of the flooding. Speaking alongside U.S. President Joe Biden at the White House, Merkel said her thoughts were with all those who had lost loved ones or were still searching for them.

"I fear the full extent of this tragedy will only be seen in the coming days," she said. Biden likewise paid his condolences for the devastating loss of life and the destruction due to the flooding.

"Our hearts go out to the families who’ve lost loved ones,” he said.

"Deeply saddened to learn that many people have lost their lives and many more are missing following severe floods in western Europe, particularly in Germany,” Çavuşoğlu wrote on Twitter. "Our thoughts and deepest sympathies are with the victims and their families,” he added, mentioning the names of his German, Belgian and Dutch counterparts - Heiko Maas, Sophie Wilmes, and Sigrid Kaag respectively.

"The number of dead has gone up to 50" from 28 in the badly hit region, a spokesperson for the interior ministry of Rhineland-Palatinate, Timo Haungs, told Agence France-Presse (AFP).

Among the worst-hit German villages was Schuld, where several homes collapsed and dozens of people remained unaccounted for. Rescue operations were hampered by blocked roads and phone and internet outages across the Eifel, a volcanic region of rolling hills and small valleys.

Some villages were reduced to rubble as old brick and timber houses couldn't withstand the sudden rush of water, often carrying trees and other debris as it gushed through narrow streets.

Karl-Heinz Grimm, who had come to help his parents in Schuld, said he had never seen the small Ahr River surge in such a deadly torrent.

Dozens of people had to be rescued from the roofs of their houses with inflatable boats and helicopters. Hundreds of soldiers were deployed to assist in the rescue efforts.

"There are people dead, there are people missing, there are many who are still in danger,” the governor of Rhineland-Palatinate state, Malu Dreyer, told the regional parliament. "We have never seen such a disaster. It’s really devastating.”

The 52nd Civil Engineer squadron and several volunteers from the U.S. air base at Spangdahlem filled and distributed hundreds of sandbags to help protect homes and businesses in the area, the U.S. European Command said.

In Belgium, the Vesdre River spilled over its banks and sent water churning through the streets of Pepinster, near Liege, where a rescue operation by firefighters went wrong when a small boat capsized and three elderly people disappeared.

"Unfortunately, they were quickly engulfed,” said Mayor Philippe Godin. "I fear they are dead.”

In Verviers, the prosecutor’s office said several bodies had been found but could not confirm local media reports that four people were killed there. In Liege, a city of 200,000, the Meuse River overflowed its banks Thursday and the mayor asked people living nearby to move to higher ground.

European Commission President Ursula von der Leyen pledged to help, and Pope Francis sent condolences, with his office saying the pontiff was praying for those injured and missing, as well as those who have lost their livelihoods.

The full extent of the damage was still unclear, with many villages cut off by floods and landslides that made roads impassable. Many of the dead were only discovered after floodwaters receded.

Authorities in the Rhine-Sieg county south of Cologne ordered the evacuation of several villages below the Steinbach reservoir amid fears a dam could break. Armin Laschet, the governor of North-Rhine Westphalia state, paid tribute to two firefighters who died and pledged swift help.

"We don't know the extent of the damage yet, but we won't leave the communities, the people affected alone,” he said during a visit to the flood-hit city of Hagen.

Laschet, a conservative who is running to succeed Merkel as chancellor in this fall's election, said the unusually heavy storms and an earlier heat wave could be linked to climate change. Political opponents have criticized Laschet, the son of a miner, for supporting the region's coal industry and hampering the expansion of wind power during his tenure. Stefan Rahmstorf, a professor of ocean physics at the Potsdam Institute for Climate Impact Research, said it was unclear whether the extreme rainfall seen in Germany was a direct result of planetary warming.

"But one can state that such events are becoming more frequent due to global warming,” he told The Associated Press (AP), noting that warmer air can absorb more water vapor that eventually falls as rain. "The increase in heavy rain and decrease in days with weak rain is now also clearly seen in observational data, especially in the mid-northern latitudes, which includes Germany,” Rahmstorf said.

The weakening of the summer circulation of the atmosphere, causing longer-lasting weather patterns such as heat waves or continuous rain, might also play a role, he added. Rainfall eased later Thursday across Germany, although water levels on the Mosel and Rhine rivers were expected to continue rising.

In the Netherlands, King Willem-Alexander and Queen Maxima visited the hard-hit Dutch town of Valkenburg on Thursday evening to support residents and emergency services. Flooding turned the main street into a torrent of brown water, inundating homes and businesses. The Dutch government sent about 70 troops to the southern province of Limburg late Wednesday to help with evacuations and filling sandbags.

Thousands of people in the city of Maastricht and villages along the Maas River were ordered to evacuate Thursday evening amid threats of flooding, and centers were set up to house them. The Maas is the Dutch name for the Meuse River. In northeastern France, heavy rains flooded vegetable fields, many homes and a World War I museum in Romagne-sous-Montfaucon.

The Aire River rose to its highest levels in 30 years in some areas, according to the L’Est Republicain newspaper. The equivalent of two months of rain has fallen over two days, according to the French national weather service, with flood warnings issued for 10 regions. No injuries or deaths have been reported, but forecasters warned of mudslides and more rain Friday.