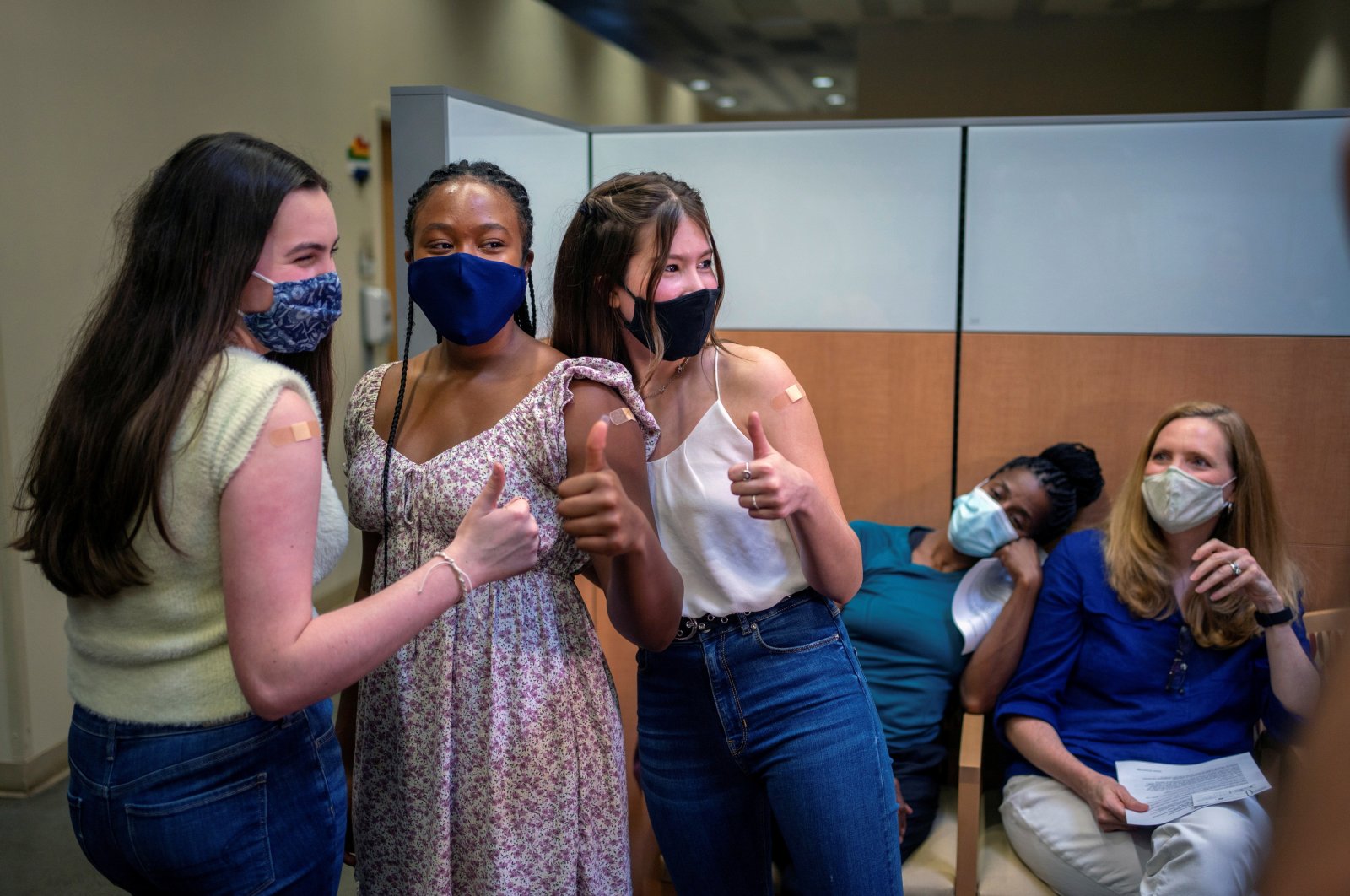 Lilly Gorman, 15 (L) Croix Hill, 15 and Ava Kreutziger, 14, give a thumbs up after the Isidore Newman School students received their first dose of the COVID-19 vaccine at the Ochsner Center for Primary Care and Wellness, New Orleans, Louisiana, U.S., May 13, 2021. (Reuters File Photo)
by ASSOCIATED PRESS May 28, 2021 5:54 pm
RECOMMENDED

The European Medicines Agency (EMA) on Friday recommended that the use of the Pfizer-BioNTech COVID-19 vaccine be expanded to children aged 12 to 15, which will allow younger and less at-risk populations access to a coronavirus shot for the first time across the continent.

Marco Cavaleri, who heads the EMA body that reviewed the vaccine, said the regulator had received the necessary data to authorize the vaccine for younger teens and found it to be highly effective against COVID-19.

The decision needs to be rubber-stamped by the European Commission and individual national regulators, he said.

The recommendation follows similar decisions by regulators in Canada and the United States last month, as rich countries slowly approach their vaccination targets for adults and look to immunize as many people as possible.

The EMA's recommendation that the vaccine's authorization be expanded to children was based on a study in more than 2,000 adolescents in the U.S. that showed the vaccine was safe and effective. Researchers will continue to monitor the shot’s long-term protection and safety in the children for another two years.

Most COVID-19 vaccines worldwide have been authorized for adults, who are at higher risk of severe disease and death from the coronavirus. But vaccinating children of all ages could be critical to stopping outbreaks, since some research has shown older children may play a role in spreading the virus even though they don’t typically fall seriously ill.

In the U.S., children represent about 14% of the country’s coronavirus cases and at least 316 have died, according to the American Academy of Pediatrics. Doctors have also identified a rare inflammatory syndrome in a very small proportion of children sickened by COVID-19.

Immunizing children against COVID-19 might also give authorities more confidence to reopen schools, as getting children to wear masks and engage in social distancing has been challenging at times.

But the World Health Organization has criticized rich countries for moving on to vaccinate their younger and less at-risk populations, saying that the extremely limited number of COVID-19 vaccines should instead be shared with poor countries so they too can protect their health workers and those most vulnerable.

“I understand why some countries want to vaccinate their children and adolescents, but right now I urge them to reconsider and to instead donate vaccines to COVAX,” WHO chief Tedros Adhanom Ghebreyesus said earlier this month, referring to the U.N.-backed initiative to distribute vaccines fairly. Of the more than 1 billion COVID-19 shots administered globally, fewer than 2% have gone to poor countries.

Other vaccine makers also are studying whether their shots are safe and effective in children. Earlier this week, Moderna Inc. said its shot strongly protects children as young as 12; it said it would submit a request for emergency use authorization to the U.S. Food and Drug Administration next month. Another U.S. company, Novavax, has a COVID-19 vaccine in late-stage development and just began a study in 12- to 17-year-olds.

Both Moderna and Pfizer-BioNTech have been testing their vaccines in children from age 11 down to six months; they get a lower dose than what teens and adults receive. China’s Sinovac has also submitted early data to the country’s regulators, hoping to prove its vaccine is safe in children as young as 3.