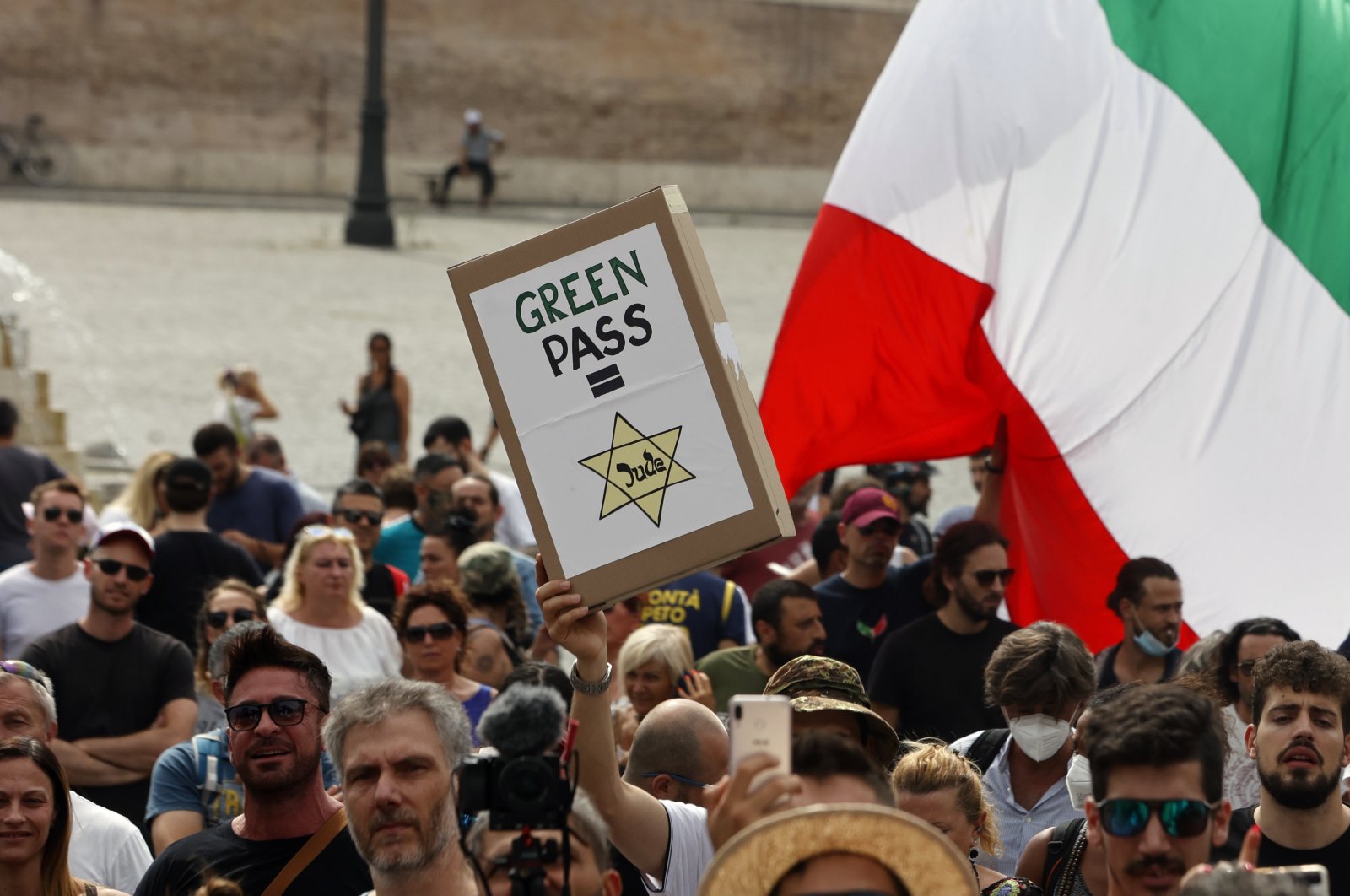 People gather to protest against the COVID-19 vaccination pass in Rome. Protesters in Italy and in France have been wearing yellow Stars of David, like the ones Nazis required Jews to wear to identify themselves during the Holocaust, July 27, 2021. (AP Photo)
by ASSOCIATED PRESS
Aug 01, 2021 10:07 am

Anti-health pass protests are rocking Europe as thousands turned out in France demanding to suspend a health pass measure that forces citizens to get vaccinated against the coronavirus, while demonstrators in Italy warned that such a requirement may lead to apartheid

Shouts of "Liberty!” have echoed through the streets and squares of Italy and France as thousands show their opposition to plans to require vaccination cards for normal social activities, such as dining indoors at restaurants, visiting museums or cheering in sports stadiums.

Leaders in both countries see the cards, dubbed the "Green Pass” in Italy and the "health pass” in France, as necessary to boost vaccination rates and persuade the undecided.

Italian Premier Mario Draghi likened the anti-vaccination message from some political leaders to "an appeal to die.”

The looming requirement is working, with vaccination requests booming in both countries. Still, there are pockets of resistance by those who see it as a violation of civil liberties or have concerns about vaccine safety. About 80,000 people protested in cities across Italy last weekend, while thousands have marched in Paris for the past three weekends, at times clashing with police.

European nations in general have made strides in their vaccination rates in recent months, with or without incentives. No country has made the shots mandatory, and campaigns to persuade the undecided are a patchwork.

Denmark pioneered vaccine passes with little resistance. Belgium will require a vaccine certificate to attend outdoor events with more than 1,500 people by mid-August and indoor events by September. Germany and Britain have so far resisted a blanket approach, while vaccinations are so popular in Spain that incentives are not deemed necessary.

In France and Italy, demonstrations against vaccine passes or virus restrictions in general are bringing together otherwise unlikely allies, often from the political extremes. They include far-right parties, campaigners for economic justice, families with small children, those against vaccines and those who fear them.

Many say vaccine pass requirements are a source of inequality that will further divide society, and they draw uneasy historic parallels.

"We are creating a great inequality between citizens,’’ said one protester in Verona, who identified himself only as Simone because he said he feared for his livelihood. "We will have first-class citizens, who can access public services, the theater, social life, and second-class citizens, who cannot. This thing has led to apartheid and the Holocaust."

Some protesters in Italy and France have worn yellow Stars of David, like those the Nazis required Jews to wear during World War II. Holocaust survivors call the comparison a distortion of history.

"They are madness, gestures in poor taste that intersect with ignorance,’’ said Liliana Segre, a 90-year-old Holocaust survivor and Italian senator for life. "It is such a time of ignorance, of violence that is not even repressed any more, that has become ripe for these distortions.”

Similar comparisons during protests in Britain have been widely condemned. One of the most prominent anti-lockdown activists, Piers Corbyn, brother of former Labour Party leader Jeremy Corbyn, was arrested earlier this year after distributing a leaflet making the comparison, depicting the Auschwitz concentration camp.

The French health pass is required at museums, movie theaters and tourist sites, and comes into effect for restaurants and trains on Aug. 9. To get it, people must be fully vaccinated, have a recent negative test, or proof they recently recovered from COVID-19.

Italy’s requirements are less stringent. Just one vaccine dose is required, and it applies to outdoor dining, cinemas, stadiums, museums and other gathering places from Aug. 6.

Expanding the requirement to long-distance transport is being considered. A negative test within 48 hours or proof of having recovered from the virus in the last six months also provide access.

Vaccine demand in Italy increased by as much as 200% in some regions after the government announced the Green Pass, according to the country's special commissioner for vaccinations.

In France, nearly 5 million got a first dose and more than 6 million got a second dose in the two weeks after President Emmanuel Macron announced that the virus passes would be expanded to restaurants and many other public venues. Before that, vaccination demand had been waning for weeks.

A full 15% of Italians remain resistant to the vaccine message: 7% identifying themselves as undecided, and 8% as anti-vaccine, according to a survey by SWG.

The survey of 800 adults, conducted July 21-23, has a margin of error of plus or minus 3.5 percentage points. The biggest reasons for hesitating or refusing to get vaccinated, cited by more than half of respondents, are fears of serious side effects and concerns that the vaccines have not been adequately tested.

About 2 million Italians over 60 remain unvaccinated, despite being given precedence in the spring. Thousands remain unprotected in Lombardy alone, the epicenter of Italy’s outbreak.

The city of Milan is dispatching mobile vans with vaccines and other supplies to a different neighborhood every day. They reach out to the reluctant with flyers and social media posts, vaccinating 100-150 people a day with the single-dose Johnson & Johnson vaccine.

Rosi De Filippis, 68, got the shot after pressure from a daughter.

"In any case, it became sort of mandatory,’’ De Filippis said. "In the beginning, we didn’t know everything we know today. So I decided to go ahead with it.”

Businesses in Italy and France are grudgingly accepting the passes, amid concern over how private companies can enforce public policy. Denmark’s experience suggests compliance gets easier with time – and rising vaccination rates.

"The first couple months weren’t good,” recalls Sune Helmgaard, whose restaurant in Copenhagen serves hearty classic Danish fare. In the spring, vaccination rates were still low and customers couldn’t always get tested in time. But with more than 80% of eligible Danes having received at least one shot and more than 60% fully vaccinated, Helmgaard’s business is back to pre-pandemic levels.

"People feel safer,” he said, "so Danes are quite happy to show their pass.”

On Saturday, French police used force and fired tear gas as thousands hit the streets of Paris to protest a special COVID-19 pass.

Some 3,000 security forces deployed around the French capital for a third weekend of anti-health pass protests. Police took up posts along Paris’ Champs-Elysees to guard against an invasion of the famed avenue by violent demonstrators. Anti-pass marches were being held in scattered cities across France, and four separate protests were held in Paris.

Tensions flared in front of the famed Moulin Rouge nightclub in northern Paris during what appeared to be the largest demonstration. Lines of police faced down protesters in up-close confrontations during the march. Police used their fists on several occasions.

As marchers headed eastward, police fired tear gas into the crowds, plumes of smoke filling the sky. A male protester was seen in the chaos with a bleeding head.

Another less tension-filled march was led by the former top lieutenant of far-right leader Marine Le Pen who left to form his own small anti-EU party. But Florian Philippot's new cause, against the virus pass, seems far more popular. His contingent of hundreds marched Saturday to the Health Ministry.

Among those not present this week was Francois Asselineau, leader of the tiny anti-EU Popular Republican Union party and an ardent campaigner against the health pass, who came down with COVID-19. In a video on his party’s website, Asselineau, who was not hospitalized, called on people to denounce the “absurd, unjust and totally liberty-killing” health pass.