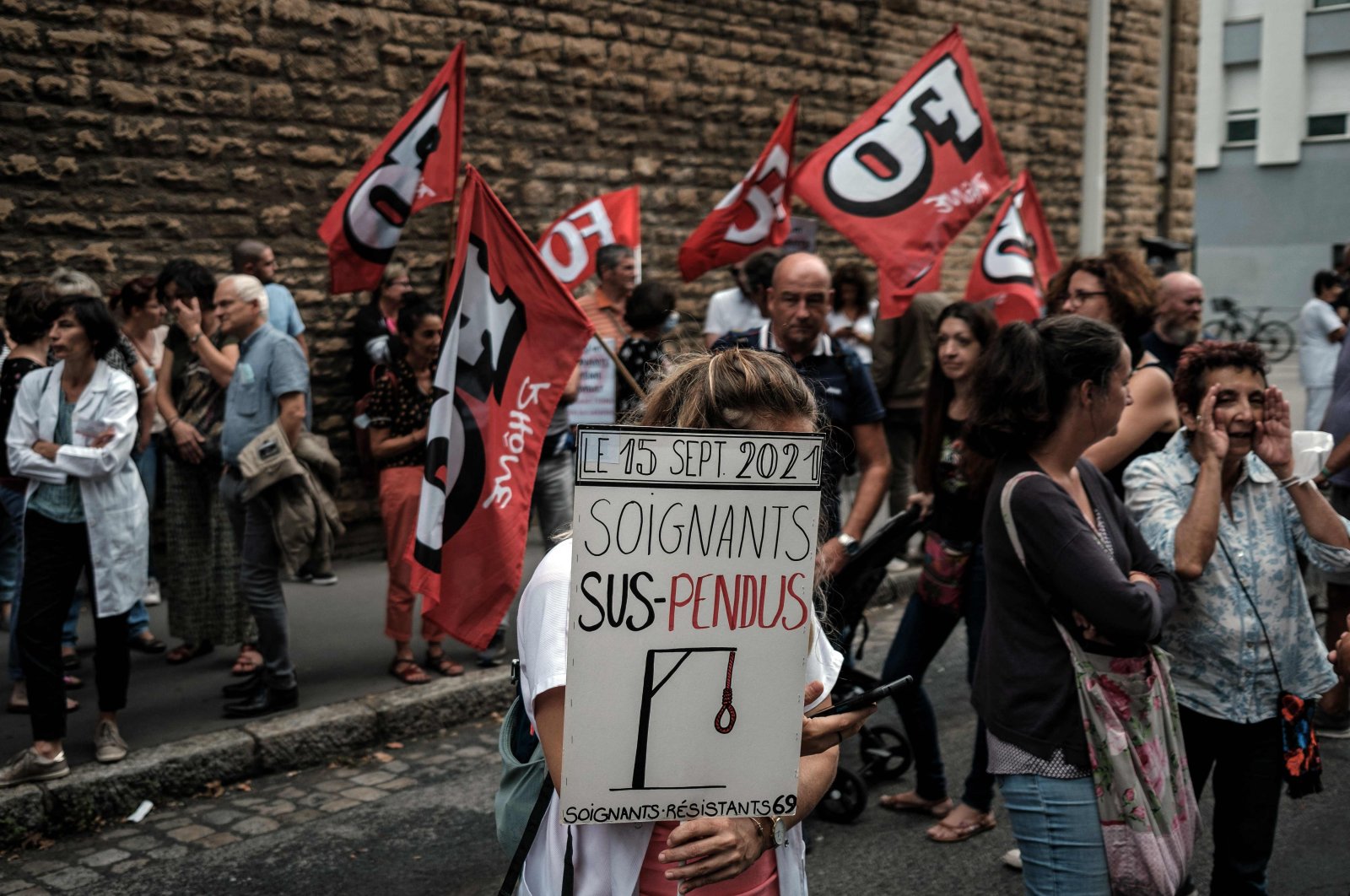 A nursing staff member holds a sign as she demonstrates in front of The A.R.S (regional health agency) against mandatory health passport "pass sanitaire" obligation for hospital workers which the government is attempting to enforce to fight the coronavirus, Lyon, south-eastern France, Sept. 14, 2021. (AFP Photo)
by ASSOCIATED PRESS Sep 15, 2021 10:53 am
RECOMMENDED

Health care workers in France face suspension from their jobs starting Wednesday if they haven't been vaccinated against COVID-19.

With about 300,000 workers still not vaccinated, some hospitals fear staff shortages will add to their strain. Vaccines are now compulsory for medical care, home care and emergency workers in France, and Wednesday is the deadline for such staff to have had at least one shot.

Failing that, they face having pay suspended or not being able to work. But a top court has forbidden staff to be fired outright. The mandate was approved by France's parliament over the summer after the government insisted that the measure was needed to protect patients and the public from new surges of COVID-19.

More than 113,000 people with the virus have died in France, and health authorities say most of those hospitalized in the most recent surge weren't vaccinated. Nearly 90% of French health care workers are estimated to be vaccinated, and polls suggest most people support the vaccine mandate for medical staff. But since some hospitals are already facing strains after a year and half of fighting the pandemic and catching up on other treatments, some fear staff shortages could spell disaster.

"We are raising the alarm ... if you insist on implementing this measure your beds will be closed, thus reducing chances (of survival) for a number of patients,” said Christophe Prudhomme, emergency room doctor and CGT union member, at a protest outside the Health Ministry on Tuesday.

The government health authority said Tuesday that 300,000 health workers remained unvaccinated. If health care workers have had only one dose, they have to take a virus test every three days until they have completed the second one. Oct. 15 is the legal deadline for both vaccines to have been completed.

Firms and employers failing to verify the vaccination statuses of their staff are liable for a 135 euro ($160) fine that can rise to 3,750 euros ($4,430) for repeated failure. Amid the population at large, about 87% of adults have received at least one jab and 83% are fully vaccinated in France. But a small, vocal minority of people are opposed to the coronavirus vaccines, including some health care workers.

Many cite incorrect information about the vaccines circulating online, worry about their long-term effects or want more time to decide. Others are angry at the government and the mandate, not the vaccines themselves.

"I am not a revolutionary, I am just afraid and we are thousands in this situation. I want them to listen to us and sit and talk around a table," said Rachid Ouchem, a medical-psychological assistant at a hospital in Plaisir west of Paris who doesn't want to be vaccinated and is facing suspension. "We can’t decide ourselves, we have doubts,” he told The Associated Press (AP). "We had politicians saying one thing and its opposite.”

Scientists note that the vaccines used in France were tested widely and the data shared publicly. Worldwide, 5.7 billion coronavirus vaccine doses have been administered so far, providing an exceptionally broad overview of vaccines’ impact on people’s health. The vaccine mandate and France’s "health pass” system required for restaurants and other venues have prompted two months of weekly protests by far-right activists and some other groups. Another Paris protest is planned Wednesday.