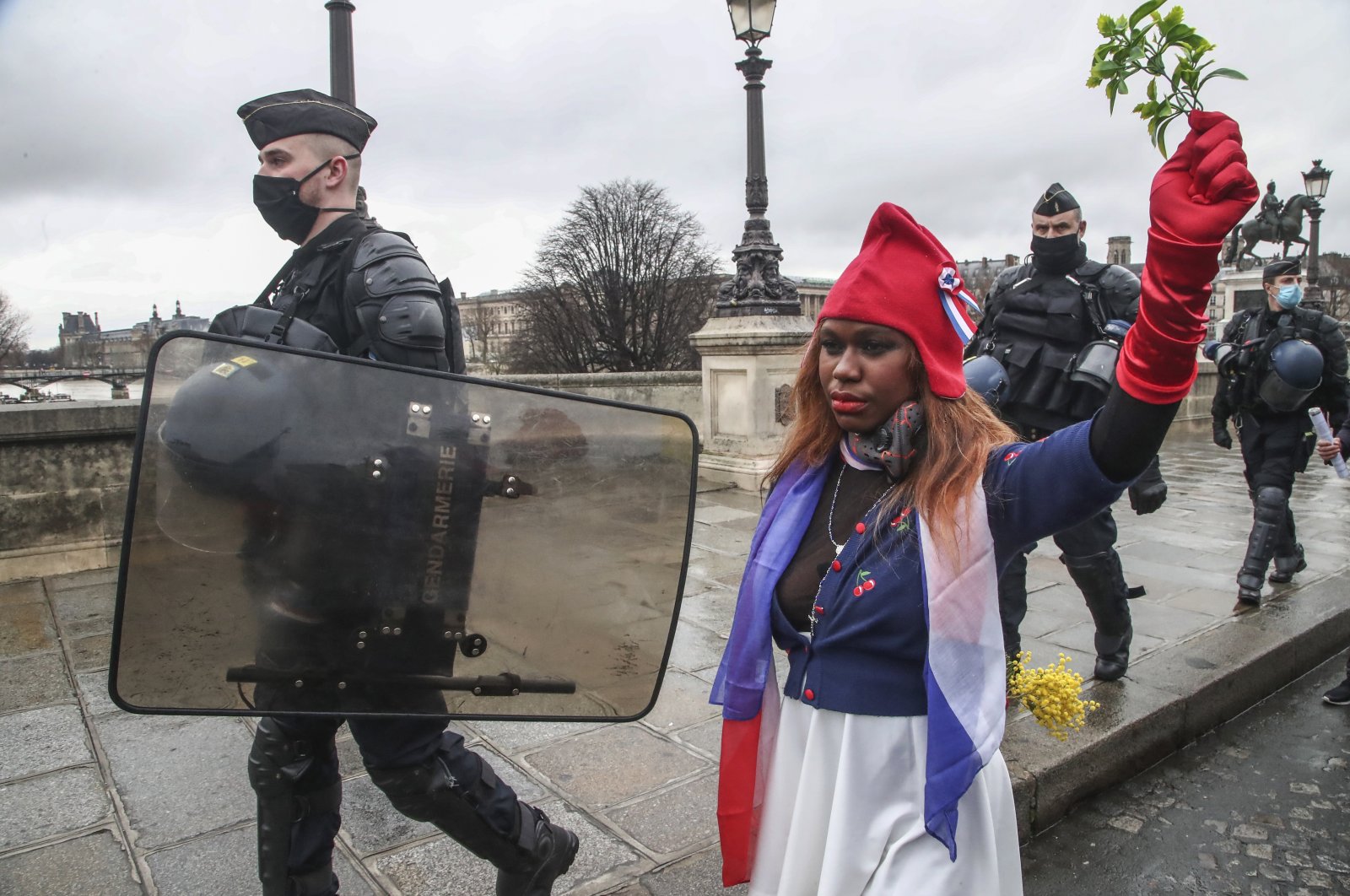 A protester dressed as Marianne, the symbol of the French Republic since the 1789 revolution walks next to riot police officers during a march for freedom in Paris, Saturday, Jan. 23, 2021. (AP Photo)
by French Press Agency - AFP Jan 27, 2021 2:54 pm
RECOMMENDED

Several nongovernmental organizations (NGOs) threatened France Wednesday to file a lawsuit complaint over racial profiling by police during ID based on color or supposed ethnic origins in the country.

The move comes as allegations mount of police racism, poisoning relations between the force and residents of high-rise housing estates with large immigrant populations.

In December, President Emmanuel Macron admitted to a problem of discrimination against people of African or Arab descent.

"When you have a skin colour that is not white, you are stopped much more (by police). You are identified as a problem factor. And that cannot be justified," he told the Brut video news portal. He was speaking after a video showing white officers beating up an unarmed black music producer in his Paris studio went viral in November.

The groups demanded a change in the criminal code to "explicitly ban discrimination during identity checks." Their other demands included setting up an independent mechanism for hearing allegations of racial profiling and giving people subjected to an ID check a written record of the operation. Failure by the state to act could lead to the first-ever class-action lawsuit against the state, lawyer Antoine Lyon-Caen said.

The warning comes a few days before the start of a summit convened by Macron to discuss how to improve relations between the police and communities following mass demonstrations in November that turned violent.

A study carried out in 2009 in Paris by the Open Society Justice Initiative and French state research body CNRS showed that black people were six times more likely to be stopped for their ID than whites.

Rights groups have long called for people targeted by ID checks to be given a receipt that they could produce to avoid being asked repeatedly for their papers.

Socialist ex-president Francois Hollande vowed to combat racial profiling during his 2012-17 tenure but proposals to trial a receipt scheme were torpedoed by then interior minister Bernard Cazeneuve.

Macron, in the Brut interview, announced plans to set up a website where people could file complaints of discrimination. His remarks caused anger among police unions, which deny any problem of institutional racism and complain that they are the victims of an increasingly hostile public.