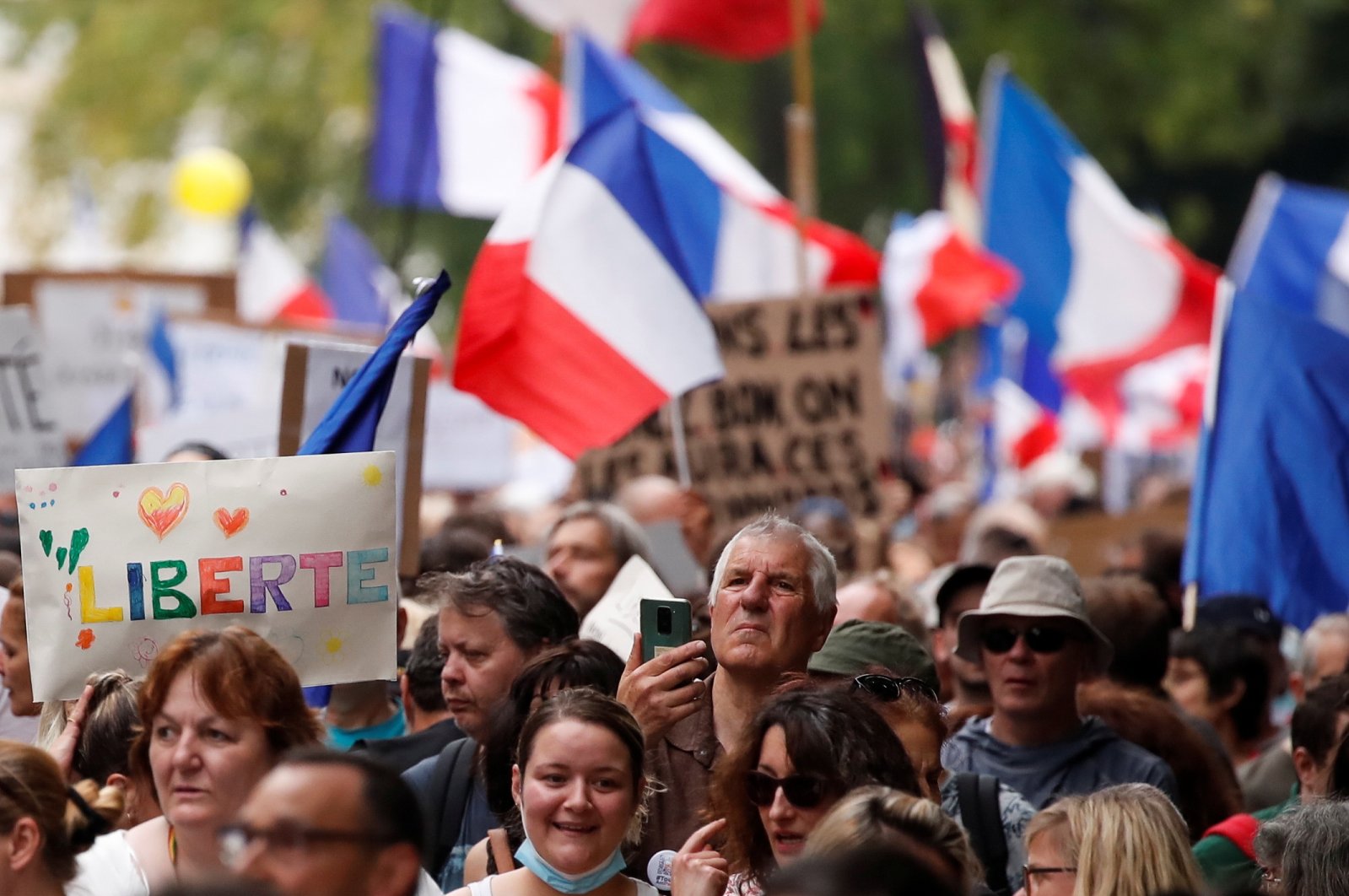 Tens of thousands of French citizens gathered in the streets again on Saturday to protest against the government's COVID-19 vaccination policies amid concern from rights groups about anti-Semitic sentiment in the protest movement.

Saturday's marches were called for the sixth weekend in a row to denounce a "health pass" system announced by President Emmanuel Macron that they say unfairly restricts the rights of the unvaccinated.

Under the new pass system, introduced progressively since mid-July, anyone wishing to enter a restaurant, theater, cinema, long-distance train or large shopping center must show proof of vaccination or a negative test. These measures led also to the flourishing of a black market for fake health passes.

At the head of the Paris march, people held up flags and banners with the word "Liberty" on them and shouted: "Macron! We don't want your pass!"

The protest movement has brought together conspiracy theorists, anti-vaxxers, former members of the "Yellow Vest" anti-government movement, as well as people concerned that the system unfairly creates a two-tier society.

Around 200,000 people marched in previous weekends, according to interior ministry figures.

Organizers claim the real number on previous weekends was double the figures estimated by police.

The government insists the pass is necessary to encourage vaccination uptake and avoid a fourth national lockdown, with unvaccinated making up eight or nine out of every 10 COVID-19 patients admitted to a hospital.

A majority of French people support the health pass system and only around a third agree with the protesters, according to a survey by the Ifop polling group for the Journal du Dimanche newspaper last weekend.

The protest movement has been marked from the beginning by slogans and symbols that have been denounced by Jewish groups and anti-racism campaigners.

Some protesters have worn yellow stars similar to the ones that the Nazi regime forced Jews to display during World War II, leading to condemnation from Holocaust survivors for the offensive comparison.

Others have been photographed holding up signs with the word "Qui?" (meaning "Who?"), a coded reference to Jews who are accused of spreading COVID propaganda through the media and profiting from the vaccine industry.

"What I find striking is how it (anti-Semitism) is recurrent and openly displayed," the head of SOS Racisme, Dominique Sopo, told Agence France-Presse (AFP). "During the Yellow Vest movement it was something expressed on the margins ... now the people carrying these signs are not hiding and other protesters are not reacting."

The left-wing newspaper Le Monde condemned the rise in anti-Semitic behavior in an editorial this week, calling it a "poison for society, a danger for all of us."

"Although anti-Semitism on the far-right is old, it seems to be encouraged at the moment by the rise in conspiracy thinking," it added.

Tristan Mendes-France, a specialist on the conspiracy movement, called COVID-19 "an accelerator of anti-Semitism because we are seeing a tragedy unfold continuously.

"People who have fallen into the conspiracy theory movement online are reminded daily about their anger and their frustration because we're always talking about the epidemic. It's like rubbing salt in an open wound."

Though disputed, the health pass system has been effective in encouraging people to sign up for vaccinations, with millions of people booking appointments in the days after it was announced on July 12.

Around 47 million people have received at least one dose, about 70% of the population, which is a higher rate than in Germany and Italy and only slightly behind Britain.

The most severe COVID-19 hotpots are currently found in France's overseas territories such as the Caribbean islands of Martinique and Guadeloupe, as well as the Pacific islands of French Polynesia.

Polynesian authorities announced a tightening of restrictions on Saturday, with schools, restaurants and bars set to close for two weeks, while a nightly curfew will be brought forward by an hour to 8:00 pm.

Tourists have been told to stay in their hotels on the islands where the number of infections has increased by a multiple of 14 in two weeks, according to the head of the islands, Edouard Fritch.

France as a whole reported around 22,000 new infections in the past 24 hours, health ministry figures show.