Syrians seek justice in Europe for decade of Assad brutality 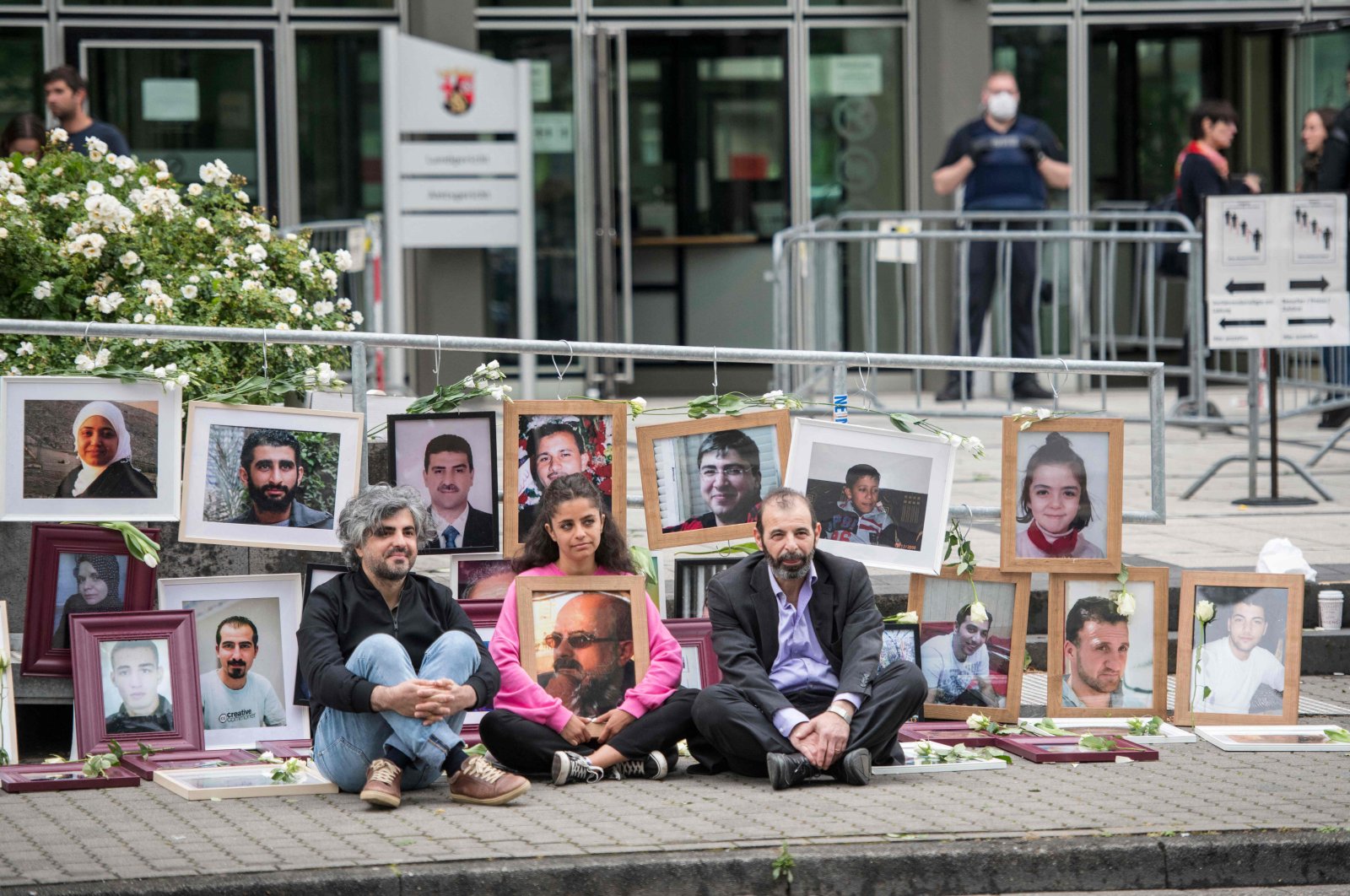 Syrian campaigner Wafa Mustafa (C) holding a picture of her father as she sits beside co-plaintiff, Syrian Oscar-nominated filmmaker Feras Fayyad (L), and Syrian human rights lawyer Anwar al-Bunni (R), in front of pictures of victims of the Syrian regime, during a protest outside the trial, in Koblenz, western Germany, June 4, 2020. (AFP)
by French Press Agency - AFP Mar 09, 2021 12:03 pm
RECOMMENDED

Wassim Mukdad has carried a deep darkness inside of him since his native Syria slipped into an abyss of conflict and terror.

But on a summer's day in western Germany in an ancient city 3,000 kilometers (1,900 miles) away from Damascus, he finally glimpsed a "ray of light."

On that day, Aug. 19, 2020, the refugee took the witness stand in a Koblenz courtroom to recount the ordeal he suffered in a Syrian detention center.

At that time, buoyed by the Arab Spring uprisings sweeping the Middle East, a sea of fists in the air rallied protesters calling for Syrian regime head Bashar Assad to go.

They were struck down however by a wave of brutal repression.

Mukdad, now 36, who was looking for a protest to join when he was picked up by police, was among those dragged to Al-Khatib prison in the Syrian capital on Sept. 30, 2011.

Almost 10 years on, standing before the German court he described being blindfolded and interrogated three times in the prison as if it had all happened yesterday.

Not only were questions flung at him.

Lashes also flew, lacerating the soles of his feet – targeted in particular for the excruciating pain every time he later tried to stand up or walk.

It was only on that August day that he finally threw off his shackles, he said.

"I finally had the feeling that my story counted, that the sufferings were not for nothing," said the musician, who plays the oud, a lute-like instrument.

Mukdad is among the Syrian exiles who have turned to European courts to ensure that state-sponsored crimes in Syria do not go unpunished.

Many arrived in Europe in the huge influx of asylum seekers fleeing war in Syria and Iraq in 2015, with Germany having taken in more than one million people since then.

Cases have been filed in Germany, Austria, Sweden and Norway against officials in Assad's regime by around 100 refugees, backed by Berlin NGO, the European Center for Constitutional and Human Rights (ECCHR).

Across Europe, activists are joining forces with police and U.N. investigators in collecting testimonies, sifting through tens of thousands of photos, videos and files of one of the best-documented conflicts in history.

Using social media, they are forming networks to track down regime officers, who they say shed their uniforms to blend in among the tide of refugees arriving in Europe.

Syrian activists believe that around a thousand such suspects have slipped into the continent.

The estimate is impossible to verify but among them is the former brigadier-general of Raqqa, Khaled al-Halabi, who according to Austrian media has been granted asylum in Vienna.

German authorities have arrested and charged a Syrian doctor accused of having tortured wounded people in a military hospital in the city of Homs.

Two cousins of an alleged victim, who like the doctor are refugees in Europe, picked the suspect out on a photograph, according to an activist lawyer.

At the Koblenz court, where Mukdad testified, the first verdict has been handed down against Eyad al-Gharib, who was found guilty of complicity in crimes against humanity.

It was the first court case worldwide over state-sponsored torture by Assad's regime.

The trial against a second defendant is ongoing.

A former colonel, Anwar Raslan, faces life in prison over the deaths of 58 people in the Al-Khatib jail.

Having taken in the largest overall number of refugees since 2015, Germany, Europe's biggest economy, has been particularly active in pursuing cases against potential suspects.

In France and Sweden too, investigations are underway.

The Syrians are bringing their cases under the principle of universal jurisdiction, which allows a country to prosecute crimes against humanity, war crimes and genocide regardless of where they were committed.

For now, it is the only legal avenue for alleged crimes in Syria's civil war as international justice has been hamstrung for years, said Catherine Marchi-Uhel, who heads the International, Impartial and Independent Mechanism (IIIM), charged by the U.N. since 2016 to investigate crimes committed in Syria.

"The UN Security Council can refer a case to the International Criminal Court and that was what happened in 2014," she said.

But the draft resolution to refer the situation in Syria to the ICC was "blocked by Russia and China which used their vetoes," she added.

Under universal jurisdiction, however, Germany and France issued international arrest warrants in 2018 against Jamil Hassan, who headed the Syrian air force's intelligence until 2019.

Paris has also started proceedings against Ali Mamlouk, who supervised the security apparatus.

German lawyer Patrick Kroker, who represents civil plaintiffs in Koblenz, said that many European countries were still hesitant to act.

"Because of fear of 'politically motivated' complaints," he said, these countries "have reduced the possibilities of prosecuting mass crimes to a bare minimum."

Mukdad's involvement as co-plaintiff began by chance at a barbecue in a Berlin park in 2019.

There, he got talking to lawyer Joumana Seif, who last year initiated a lawsuit over rape and sexual abuse in Syrian prisons, and asked Mukdad if he would be prepared to testify against Raslan.

Several weeks later, he was giving evidence to German police.

But not all refugees are so forthcoming.

Many fear endangering their relatives in Syria. Others are reluctant to relive the pain.

Arguably the most prolific "torturer hunter" in Berlin, Anwar al-Bunni has made a 19th-century former brasserie his office.

The lawyer, who languished for five years in Syrian prisons, knows Raslan after being arrested by him in Damascus in 2006.

More than a decade later, he said he came face to face with Raslan again in Berlin outside an asylum seekers' home where they were lodged.

"I told myself, I know him. But it was impossible to recall from where," he said.

By then, he had remembered exactly how he knew him.

"But at that time I had no clue what I could do against him," said Bunni.

The third time they met, Raslan was in the dock and Bunni on the witness stand.

"I looked at him. But he ignored me."

For the indefatigable activist who collects victims' testimonies, the opening of the Koblenz trial in April 2020 "marked a turning point".

"Syrians are regaining hope as they see that justice is working," he said.

"There are lots of people who now want to talk, we no longer have enough time to receive them all," he said, his mobile phone appearing to corroborate the demand with an incessant buzz indicating incoming messages.

In Paris, another Syrian lawyer, Mazen Darwish, is on a similar quest with an informal group of investigators from the Syrian Center for Media and Freedom of Expression (SCM).

With two other NGOs, Darwish has filed two cases with German and French prosecutors over chemical attacks blamed on Assad's regime.

But witness accounts are not enough to secure convictions, material proof is indispensable too.

The Commission for International Justice and Accountability (CIJA) has taken up the herculean task of collecting this evidence.

There is no official address for the group, funded by the United States, European Union and Britain.

There is not even a sign at the entrance to its office.

Anonymity is so important for the CIJA that before meeting its founder Bill Wiley, one must agree to not reveal even the name of the city where the organization keeps its precious archive of over a million Syrian regime documents.

Among the files locked up in a secured room are papers from the military, security and intelligence services.

Facing a rout in fighting at the time, "the regime abandoned many buildings, leaving behind stacks of documents," said Wiley, who has also worked with prosecutors at the International Criminal Tribunals for the former Yugoslavia and Rwanda.

"We made deals with armed opposition groups to not destroy them," he said.

"Our teams were close to the operation and could run out to get the documents or people would get calls from their contacts from security intelligence services."

Up to 50 CIJA staff risked their lives in the operation.

"What was most dangerous was transporting the documents out of Syria even as the frontlines were changing constantly," he said.

At the CIJA's headquarters, teams of analysts then carried out the complex task of untangling the web of responsibilities and "placing top officials into the structures of command."

In the Raslan case, the organization sent investigators two reports bearing the signature of the accused.

Since 2016, it has received 569 requests for documents held in the CIJA secret archive from 13 Western nations regarding 1,229 people linked to the regime.

In the town of Meckenheim, southwest of Bonn, Germany's Central Office for Combating War Crimes is seeing files linked to the Syrian conflict pile up.

In less than a decade, its staff has tripled to 28.

Since the beginning of the war, German justice like that of Sweden has been collecting evidence of potential crimes.

Not all are linked to Syria, but 27 of them concern war crimes and 18 relate to crimes against humanity, according to a government document.

Like France, Germany's immigration authority routinely asks asylum applicants if they were witnesses to war crimes or crimes against humanity and to flag these to the police.

National investigators are also not working in isolation.

It was through French-German collaboration that Raslan and two other suspects were arrested in February 2019 in France.

Additionally, investigators share their information with the U.N. team.

Dawn was just breaking as he stood in line for a seat in court.

Stone-faced, he listened as it handed down the historic conviction, sentencing Gharib, a former intelligence agent, to four and a half years in prison.

"The ruling is a relief," said Mukdad.

"But it's just the beginning. Because it's Bashar al-Assad and his inner circle who we're after."