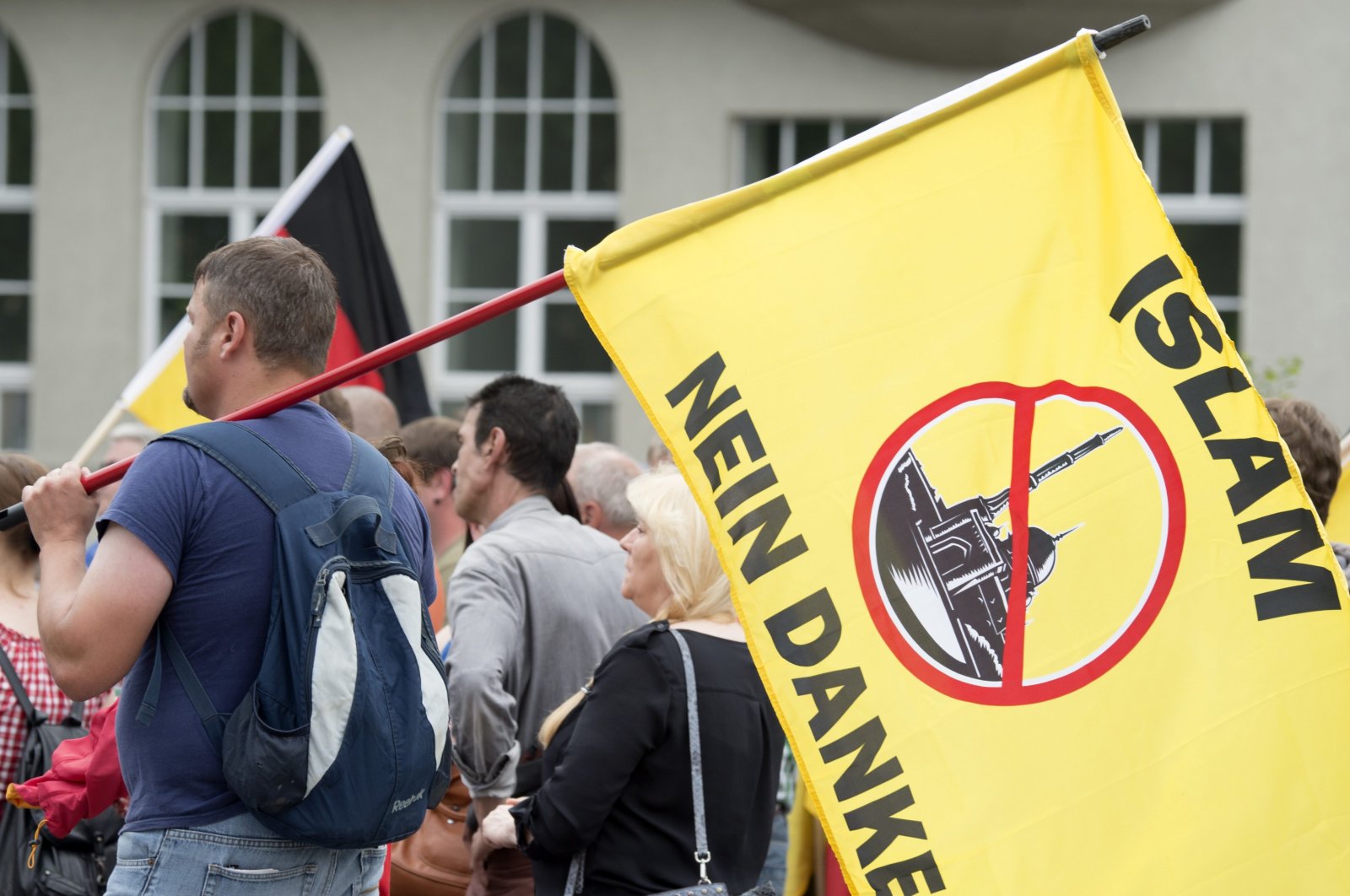 A supporter of the right-wing group "Patriotic Europeans say no" holds a flag reading "Islam, no thanks" during a rally in Erfurt, Germany, June 4, 2016. (AP Photo)
by Anadolu Agency Jun 03, 2021 4:31 pm
RECOMMENDED

A prominent member of the parliamentary faction of the co-ruling Christian Democratic (CDU) party said Thursday that Germany should also have a "political Islam map."

Talking to the right-wing weekly Junge Freiheit newspaper, Hans-Juergen Irmer said: "The fight against political Islam is an important task. Such a card should also be available in Germany."

Irmer was referring to the controversial initiative of Austrian Integration Minister Susanne Raab, who last week unveiled the "National Map of Islam" with the names and locations of more than 620 mosques, associations and officials and their possible connections abroad.

Many Muslims feel stigmatized and their security threatened by the publication of addresses and other details amid growing Islamophobia in Austria, especially in the wake of a deadly attack in Vienna last November.

The CDU party leader reiterated his support for the anti-Muslim measure of the Austrian government. "Austria draws the right conclusions," Irmer emphasized. It is right and important to "gain knowledge, for example, who is sitting where and what functions he has." Such a card would complement the package of measures against "political Islamism” decided a few weeks ago by our parliamentary group, he added.

The position paper states, among other things, that the financing of mosques from abroad must be made more transparent. In addition, state cooperation with organizations of "political Islam" is to be ended, he added.

On Wednesday, Chairperson of the German Central Council of Muslims Aiman Mazyek slammed Austria's right-wing government for launching the "Islam map," calling it "irresponsible." "With battle cries like 'Political Islam' and such actions, anti-Muslim racists and religious extremists will be strengthened at the same time, while millions of Muslims are put under general suspicion,” Mazyek told the WAZ newspaper.

"The loser of such irresponsible actions is democracy and the values of our free society in Europe,” he added.

Austria's government has sought to defend the disputed "Islam map," which has been strongly condemned by the country's Muslim community and is also drawing mounting international criticism.

Meanwhile, the Vienna-based daily Der Standard reported earlier in the day that the "Islam map” has temporarily gone offline.