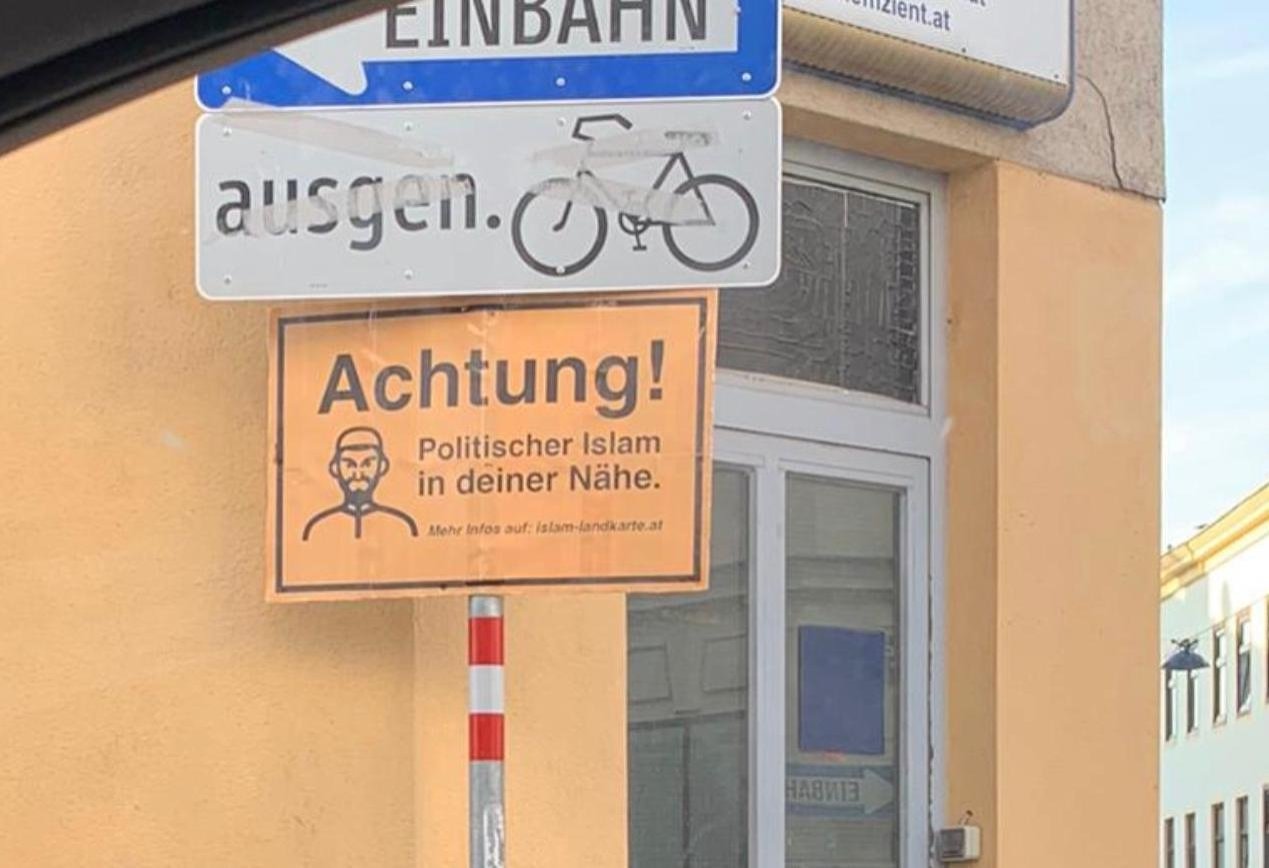 This undated picture shows a sign with the words "Beware! Political Islam nearby" and an image of a man with a beard and skullcap, these signs can be seen hanging outside many mosques in Vienna, Austria. (AA Photo)
by DAILY SABAH Jun 02, 2021 2:00 pm
RECOMMENDED

Austria has been ratcheting up its crackdown on Muslims and continues to promote a controversial "Islam map" that shows key points of interest related to the country's Muslim community.

Recently, signs were hung across Austria with the image of an "angry Muslim" and a warning of the dangers of political Islam underneath. “Beware! Political Islam nearby," the signs read, prompting widespread condemnation.

"The Austrian state is failing in its duty to treat Muslims fairly. Its 'Islam map' was outrageous & seems to have facilitated the demonisation of Muslims under the rubric of only targeting 'political Islam,'" Miqdaad Versi, a management consultant and media spokesperson for the Muslim Council wrote on Twitter Wednesday.

The banners are an "example of the dangers of state-sponsored Islamophobia in Austria," he said. "The far-right government published a map of all mosques & now signs are being put up near ordinary mosques."

These signs have been found across Austria.

Its "Islam map" was outrageous & seems to have facilitated the demonisation of Muslims under the rubric of only targeting "political Islam"https://t.co/vkK6ezmTyR pic.twitter.com/Q0vwq6nuaA

Farid Hafez, a prominent Austrian Muslim academic, who was recently targeted by authorities for his work on combating hate crimes, asserted that the Islam map was launched by the Documentation Center 4, an Austrian state fund featuring many anti-Muslim authors.

The anti-Islamophobia scholar, a strong critic of Austria's anti-Muslim policies, spoke out after an incident on Nov. 9, 2020, when his family's home was targeted. Hafez in a video released described the disturbing experience. He recalled the red dots of weapons pointed at his chest by mask-wearing Austrian police officers who had stormed his home.

"The reason I became interested in (working against) Islamophobia is because I felt like nobody was talking about it," Hafez said in the video.

The Council of Europe demanded Austria withdraw the controversial "Islam map." The publication of the map is hostile to Muslims and potentially counterproductive, the European human rights body said in a statement.

The map serves "existing grievances" and is considered by many Muslims to be "highly discriminatory," the statement added.

"They feel stigmatized and threatened in their security by the publication of addresses and other details."

"This is by no means a general suspicion of Muslims. It's about the common struggle against political Islam as a breeding ground for extremism," Raab told the German Welt newspaper.

Muslims across Austria feel threatened by the publication of appeals and other details amid growing Islamophobia in Austria, especially after the deadly attack in Vienna last November. The Islamic Religious Community in Austria (IGGOE), which represents the interests of roughly 800,000 Muslims in Austria, warned against stigmatizing Muslims living in the country "as a potential danger to society and the democratic legal order in the country."