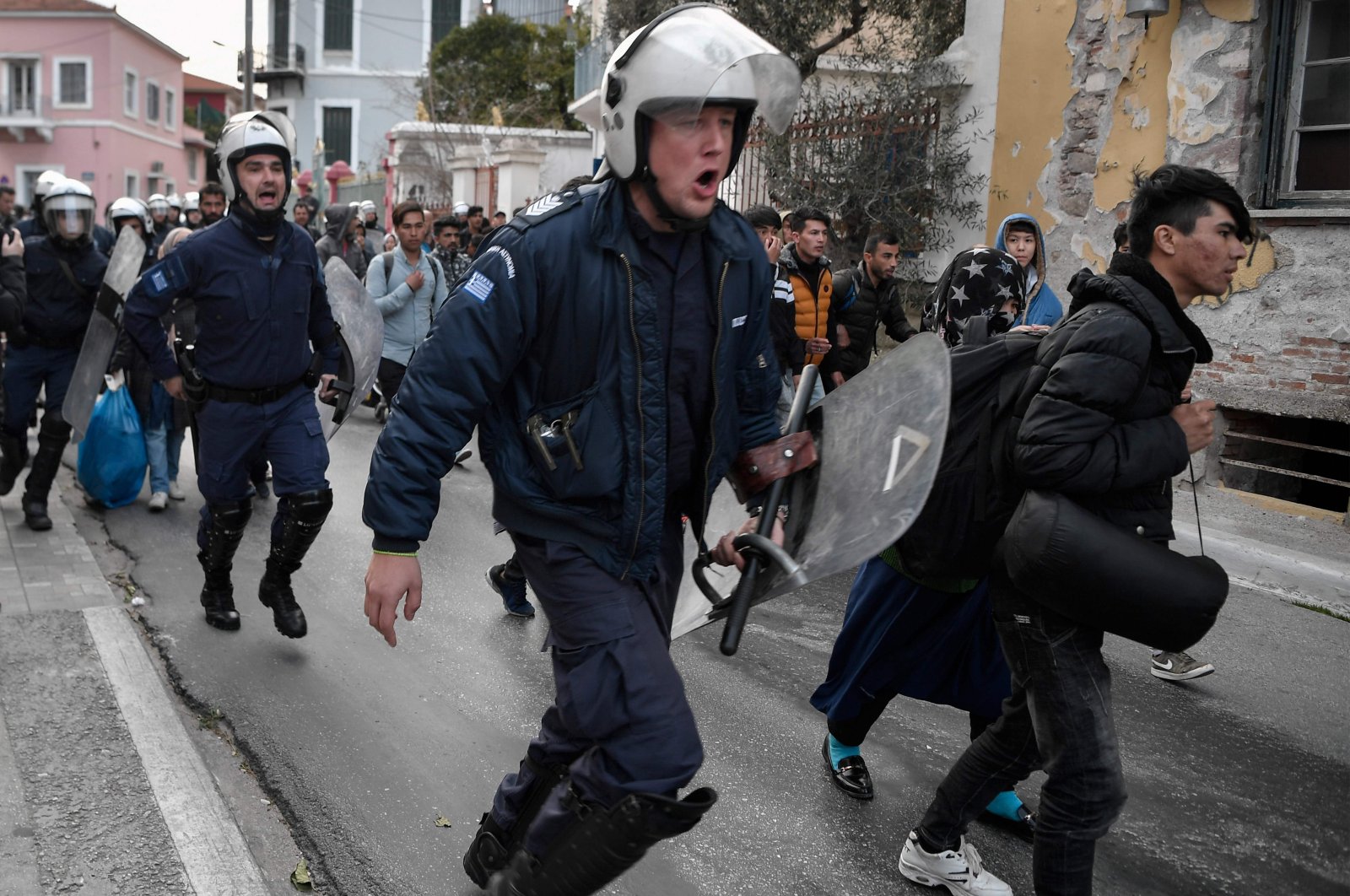 Greek anti-riot police run after migrants and refugees from the Moria camp who gathered outside the port of Mytilene on the island of Lesbos, hoping to get a ferry to Athens, on March 4, 2020. (AFP Photo)
by Daily Sabah with Wires Mar 11, 2020 1:29 am
RECOMMENDED

The Greek government is detaining migrants in secret at an extrajudicial location before expelling them to Turkey without due process, as part of several hard-line measures to seal its border, contravening international law.

According to a report from the New York Times, several migrants have reported having been captured, stripped of their belongings, beaten and expelled from Greece without being given a chance to claim asylum or speak to a lawyer, in an illegal process known in international law as refoulement.

Meanwhile, Turkish officials said that at least three migrants had been shot and killed while trying to enter Greece in the past two weeks.

The Greek government has defended its actions as a legitimate response to recent provocations by the Turkish authorities, who have allowed migrants to leave its borders for Europe in light of a recent influx from those fleeing war-torn Idlib, where Turkey has recently restored order after a prolonged attempt by the Assad regime to encroach upon the de-escalation zone established by Turkey in partnership with Russia.

Greek authorities have denied reports of deaths along the border. Meanwhile, former U.N. Special Rapporteur on migrant human rights, François Crépeau, said it was the equivalent of a domestic “black site.”

As reported widely in both the Turkish and international press, the Greek Coast Guard, nominally a lifesaving institution, has fired shots in the direction of migrants on board dinghies trying to reach Greek shores in recent weeks.

One migrant, speaking to the New York Times, said of the Greek border guards: “To them, we are like animals,” having spent a night detained, without food or drink, before being ferried back across the border dividing Turkey and Greece.

The Greek reaction to refugees has been harsh. At least two refugees have been killed and many battered, attacked and teargassed by Greek forces. Greek forces have even tried to sink the rubber boats of refugees trying to cross the Aegean.

Turkey's decision to open the border came after 34 Turkish soldiers were killed by Syrian regime forces in Idlib, northwestern Syria last week. The Turkish soldiers were stationed there to protect local civilians under a 2018 deal with Russia which prohibits acts of aggression in the region.