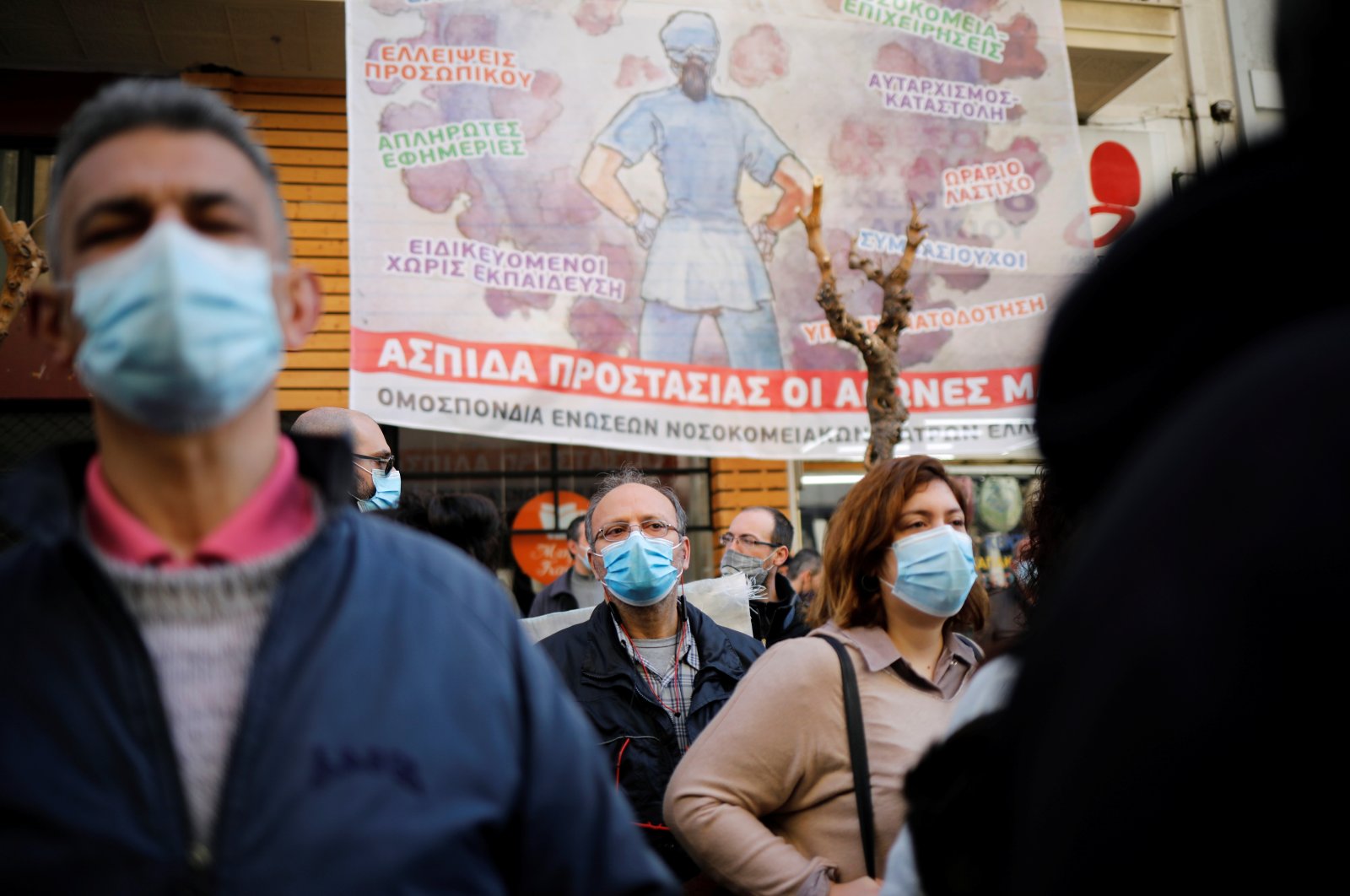 Greek hospital doctors and staff take part in a demonstration against a lack of intensive care units at public hospitals, amidst the spread of the coronavirus disease (COVID-19) in Athens, Greece, Feb. 23, 2021. (Reuters Photo)
by Associated Press Mar 22, 2021 7:52 pm
RECOMMENDED

Greece’s health minister is requisitioning the services of private sector doctors from certain specialties in the wider Athens region to help fight a renewed surge in coronavirus infections that is straining hospitals to their limits.

In an announcement released Monday, Vassilis Kikilias said that despite repeated appeals for private doctors to volunteer to help in the public sector, very few came forward. Therefore, the minister said, he was ordering specialists in pathology, pneumonology and general medicine to help.

Kikilias had said Friday he would requisition private sector doctors unless at least 200 volunteered within 48 hours. Government spokeswoman Aristotelia Peloni said Monday that only 61 doctors had stepped forward voluntarily.

“It was the last measure, if you will, in the context of the emergency plan prepared by the Health Ministry, and it was decided that it was now necessary to mobilize private doctors as part of this great struggle, this national effort, after all the opportunities for voluntary participation were exhausted,” Peloni said.

The requisition order is for one month for 206 doctors, health authorities said.

Greece has been experiencing a renewed surge of COVID-19 despite lockdown-related measures being in force since early November, with dozens of daily deaths recorded, as well as increasing numbers of patients hospitalized in intensive care units. About 500 people are hospitalized each day across the country with COVID-19, health authorities say, with 200 of them being in the wider Athens region.

The pandemic has also had political effects as Greece’s center-right Prime Minister Kyriakos Mitsotakis also recently accused political opponents of exploiting lockdown fatigue amid a surge in coronavirus infections and a wave of violent anti-government demonstrations.

On Monday, Greece reported 1,707 new coronavirus infections and 69 more deaths, bringing the total confirmed infections in the country of around 10.5 million people to just under 240,000 and the death toll to 7,531.

Despite the rising numbers, authorities have announced a slight relaxation of lockdown measures, with hairdressers, nail salons and open-air archaeological sites reopening as of Monday. Amateur fishing, which had also been banned, is also being allowed for those living in coastal areas, as access to the sea is allowed only on foot or bicycle.

Authorities said Monday that close to 1.5 million doses of the vaccine have been administered so far in the country, with nearly 1 million people receiving at least one jab.