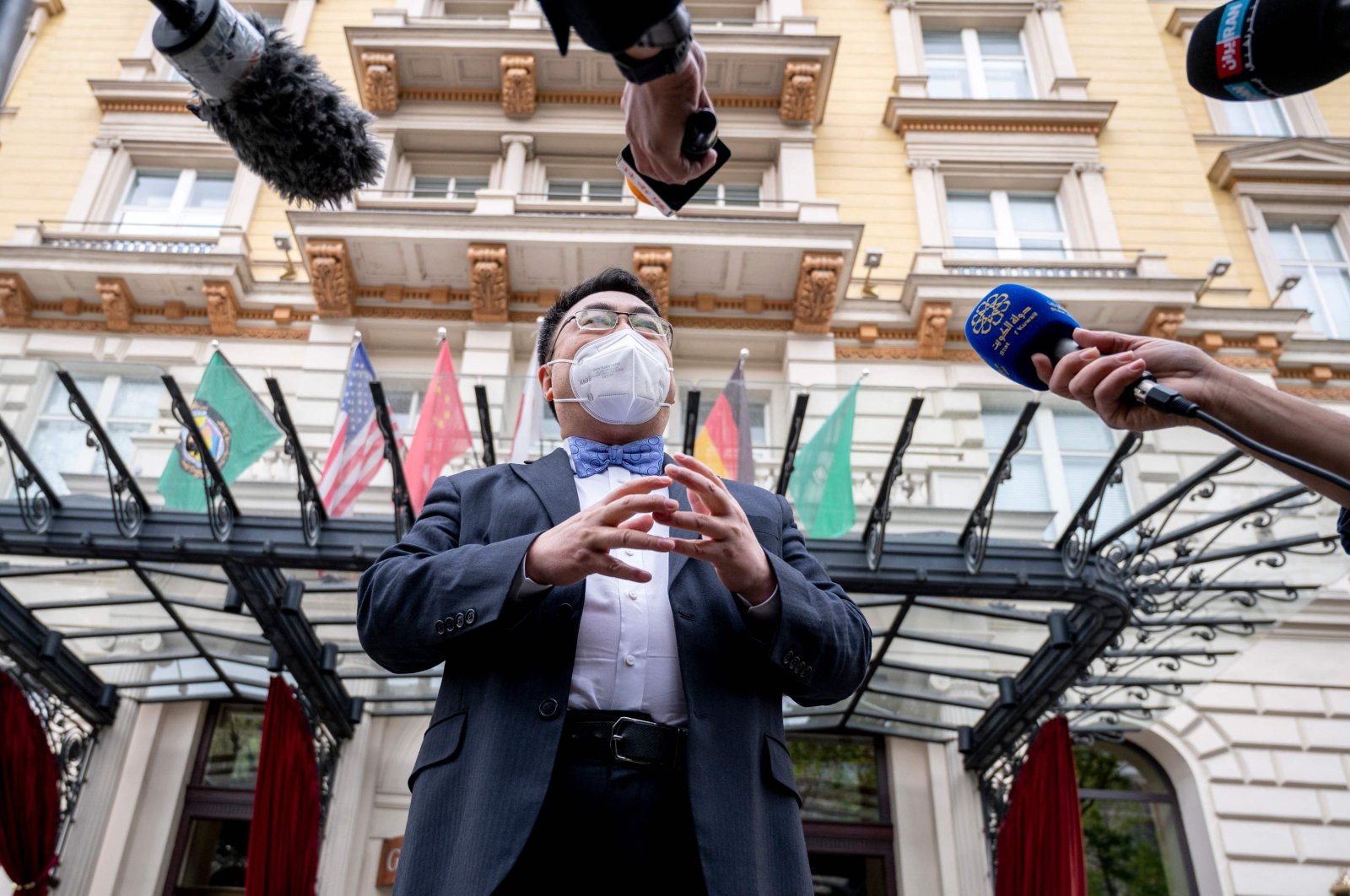 The ambassador of the Permanent Mission of the People's Republic of China to the United Nations, Wang Qun, speaks to journalists outside the Grand Hotel Wien after talks with Iran in Vienna, Austria, April 27, 2021. (AFP Photo)
by Reuters Apr 27, 2021 8:06 pm
RECOMMENDED

Iran and five world powers continued their talks in Vienna on Tuesday in an indirect bid to make the United States return to the 2015 nuclear deal and lift crippling sanctions. The meeting sought to speed up efforts as Washington reassured its Gulf Arab allies on the status of the talks.

Iran, Britain, China, France, Germany and Russia began the third round of meetings in Vienna to agree on steps that would be needed if the agreement, which was abandoned by then-U.S. President Donald Trump in 2018, is to be revived.

The main differences are over what sanctions the U.S. will need to remove, what steps Iran will need to take to resume its obligations to curb its nuclear program, and how to sequence this process to satisfy both sides.

A U.S. delegation is in a separate location in Vienna, enabling representatives of the five powers and the European Union, which coordinates the talks, to shuttle between both sides because Iran has rejected direct talks.

Russian and Chinese delegates said all sides had agreed to "expedite" the process.

The negotiating sides want to have something concrete in hand by mid-May, before a monitoring agreement between Iran and the U.N. nuclear watchdog expires later that month, and ahead of a June 18 presidential election in Iran.

"We hope all parties will sustain the momentum we have already reached in their efforts towards an earliest resolution of this issue before us," Wang Qun, China's envoy to the U.N. watchdog, told reporters after a meeting of senior diplomats, adding that they would reconvene on Wednesday to take stock.

Three expert working groups have been tasked with unravelling the most important issues and drafting solutions.

At the end of talks last week, the United States and its European allies said serious differences still persisted despite some progress in their latest indirect talks.

Among the challenges for the United States will be convincing its key Gulf Arab allies that any deal will open the door for a stronger nuclear accord with longer duration, and addressing Tehran's ballistic missiles program and wider regional behavior.

Western states have stressed that their immediate focus is to revive the existing deal before tackling those issues. Amid concerns from Gulf allies over that strategy, the U.S. special envoy for Iran held a video call with them on Tuesday.

"Good discussion this morning with our GCC partners regarding the status of (Joint Comprehensive Plan of Action) JCPOA talks and regional security," Rob Malley said on Twitter, referring to the nuclear deal.

"Heading back to Vienna for the next round of talks toward our objective of a mutual return to JCPOA compliance."