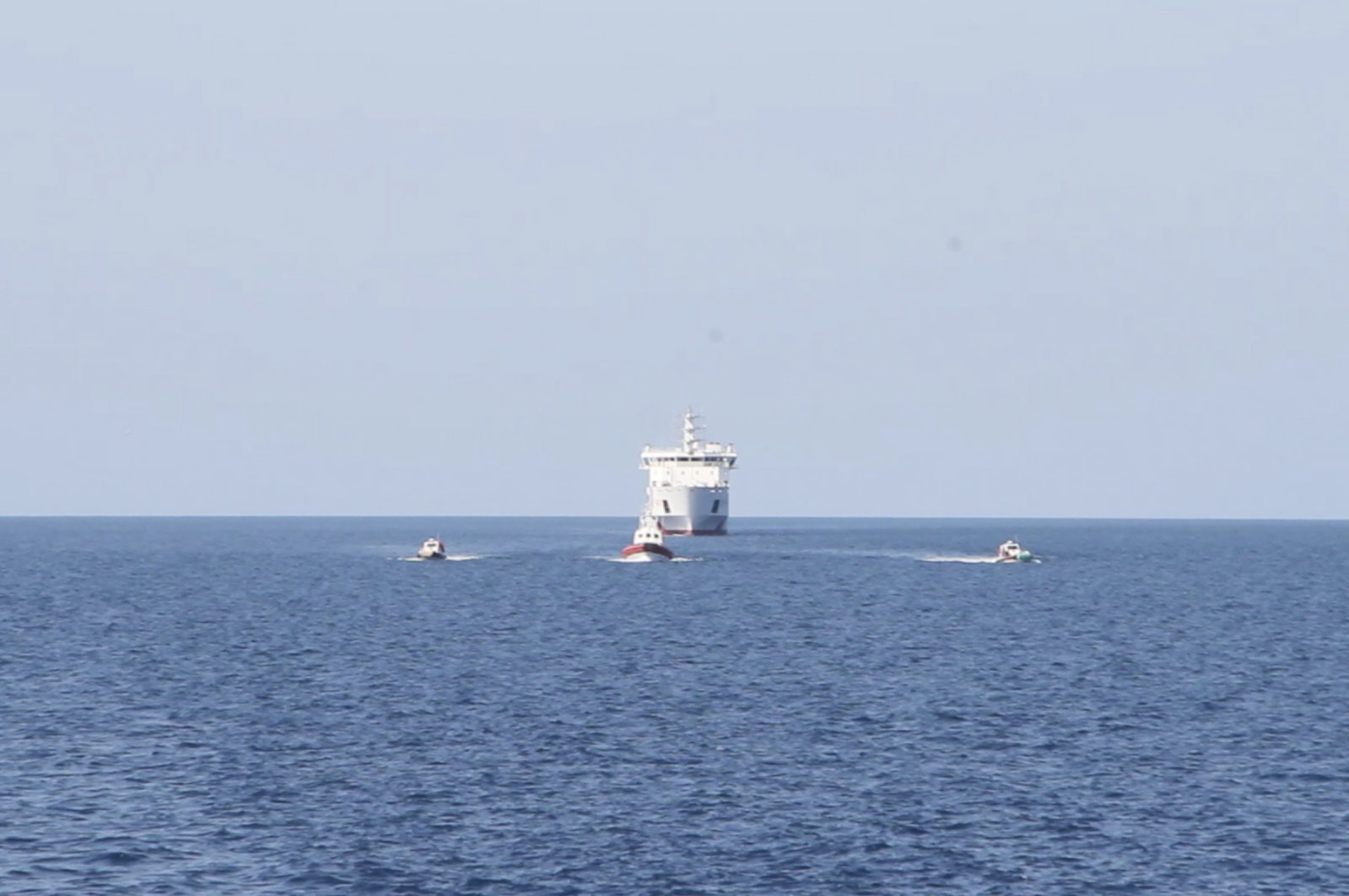 The Alan Kurdi rescue ship carrying migrants saved from sinking in the Mediterranean approaches a ferry, seen in the background's center, for a 14-day quarantine, April 17, 2020. (AP Photo)
by German Press Agency - DPA
May 06, 2020 12:54 pm

Sea-Eye, the charity that operates the vessel, called the decision "grotesque" on Wednesday and said it would prevent a resumption of its rescue activities for the rest of May.

The impounding was decided after a Tuesday onboard inspection and will last "until the irregularities detected ... are rectified," the Guardia Costiera said in an overnight statement.

It said the irregularities were "of a technical and operational nature to the extent that they risk compromising not only the safety of the crew but also of those who have been or could be rescued."

Germany, the flag state of the vessel, would have to intervene to ensure the ship is in compliance with international and national maritime and waste disposals laws, the Guardia Costiera said.

Sea-Eye said in a statement it would "of course cooperate with German and Italian authorities," and minimized the irregularities as "technically solvable."

"The fact is that the Alan Kurdi crews saved a total of 688 lives without something happening to a crew member or a rescued person," Sea-Eye stressed.

It noted that the ship has undergone four inspections in Italy and Spain during the past 16 months, whereas "it is quite common for coastal states to inspect other states' ships once a year."

The vessel rescued 150 migrants off Libya on April 6. On Monday, the ship's crew finally reached land after they ended their coronavirus quarantine.

The rescued migrants, minus four people who were evacuated on medical grounds, also reached land on Monday after completing their coronavirus quarantine on an Italian ferry off the port of Palermo.

Some 34 migrants originally picked up at sea by Spanish rescue ship Aita Mari, who also had their quarantine on the ferry, disembarked as well.

Italian officials expect the majority of the migrants to be transferred to other EU nations, but no relocation deal has been announced to date.

Due to the coronavirus pandemic, Italy is no longer allowing the immediate disembarkation of rescued sea migrants, a move criticized by rights groups.

The Alan Kurdi is named after a Syrian boy who drowned in September 2015 while his family tried to reach the Greek island of Kos from Bodrum in Turkey. His mother and brother also died in the crossing.

Kurdi was almost 3. A picture showing him face down, wearing a red T-shirt, washed up dead on the shore, became a symbol of Europe's migration crisis.