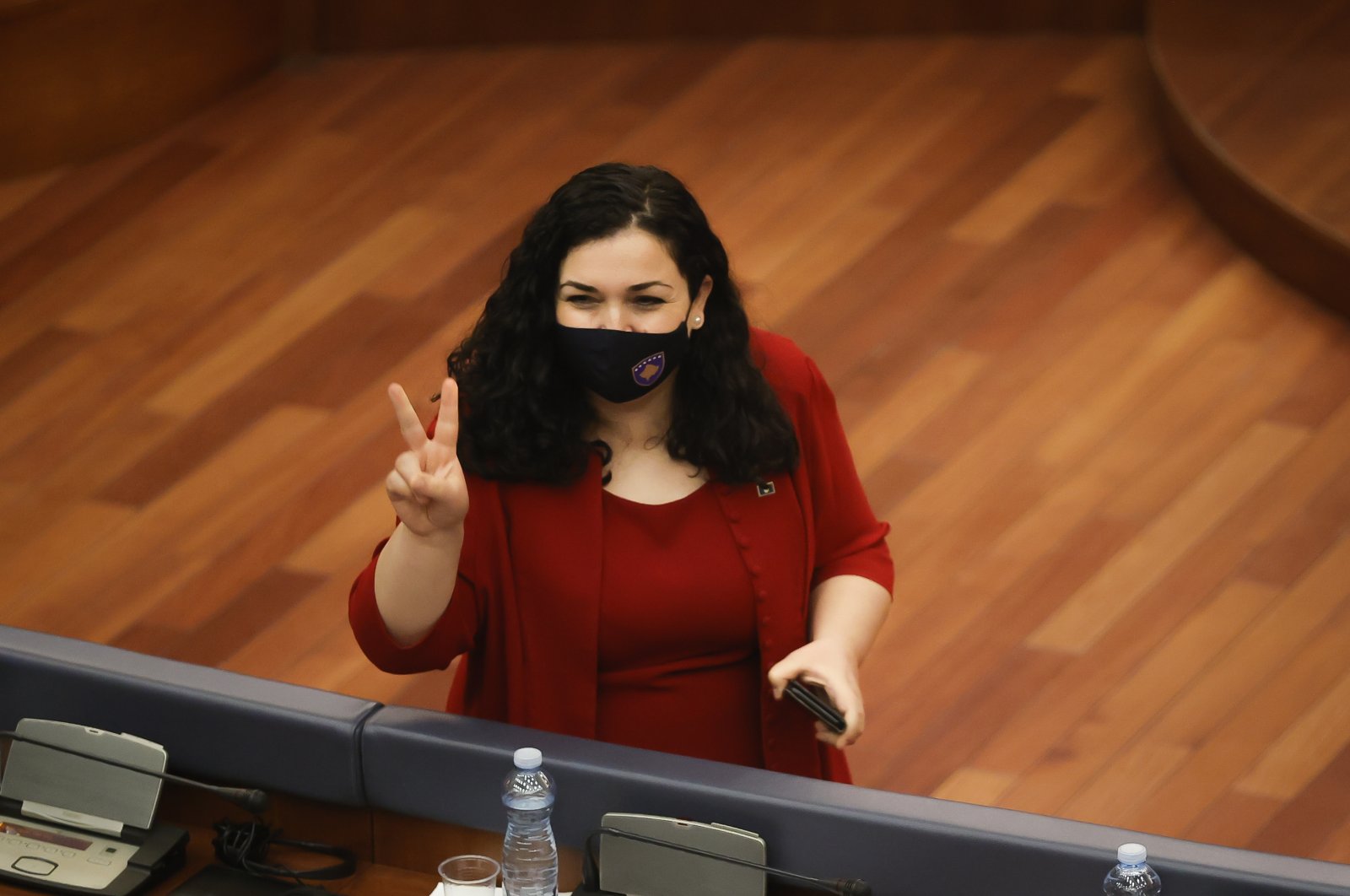 Vjosa Osmani candidate for the President of the Republic of Kosovo flashes victory sign during a parliament session to elect the new president in Pristina, Kosovo, April 3, 2021. (EPA Photo)
by French Press Agency - AFP
Apr 04, 2021 9:33 pm

Lawmakers in Kosovo elected a new president Sunday for a five-year term, overcoming an opposition boycott that had kept parliament short of a quorum one day earlier.

Vjosa Osmani, who was elected Kosovo's new president on Sunday, is a law professor who belongs to a new political generation in the Balkan territory vowing to eradicate widespread corruption.

The charismatic Osmani, 38, is one of Kosovo's most popular politicians notably among the young and women, who see her as a role model in the patriarchal society.

She is the second female president of majority-ethnic Albanian Kosovo, which proclaimed independence from Serbia in 2008, a decade after their bitter war.

Along with newly-elected Prime Minister Albin Kurti, Osmani opens a new chapter on Kosovo's political scene, dominated for years by former rebel Albanian commanders who made their names during the 1998-1999 war.

Running on an anti-corruption ticket, Kurti's anti-establishment Vetevendosje in coalition with Osmani's Guxo (Albanian for 'Dare') party scored a landslide victory in the February parliamentary elections.

One-third of members In the 120-seat assembly are women.

And women hold six ministerial posts in the 15-member government, the highest number ever in the conservative society.

"We must fight the mentality where women are not treated on an equal footing with men, and it starts with governing differently," Osmani tweeted recently.

The multilingual president does not miss an opportunity to publicly raise her voice on women's rights.

In February, Kosovo’s main opposition party has won a clear victory in an early election held amid the coronavirus pandemic.

Local media have described Osmani as "fearless" as she was among the first to boldly speak out about the ruling corrupt elite – not easy given the respect they earned by their wartime roles.

Kosovo cannot "move forward unless we tear down the big and strong wall of crime and corruption that has been built throughout the years," she told Agence France-Presse (AFP) recently.

Such statements led many Kosovars to perceive Osmani as a driving force for change for the better.

"Osmani has captured the hearts of many Kosovo citizens, as she is charismatic, confident and a 21st-century role model for women," one law journal described the president recently.

"Those who have pledged allegiance to Vetevendosje have nothing else to offer than criticism" and have a "basic lack of the knowledge necessary to govern," said former head of the Democratic League of Kosovo (LDK) Isa Mustafa, who quit due to his party's poor electoral result.

But Osmani's supporters have faith she will succeed in implementing badly needed reforms.

"Without any doubt, she will know and dare... to fight every criminal and illegal phenomenon that threatens to hold as hostage our future, our children, our new state," said Ilir Ferati, a former student of hers.

Until the February vote, Osmani served as acting president, standing in for Hashim Thaci, who has been detained in The Hague since November awaiting a war crimes trial.

Born in the divided city of Mitrovica, Osmani studied at Pristina University, going on to teach there from 2006 and later earning a Ph.D. in the U.S.

She entered politics as an advisor of the then president Fatmir Sejdiu of the center-right LDK.

An international law expert, Osmani was first elected to parliament in 2011 with the LDK and was the party's candidate for prime minister in the 2019 parliamentary election.

But she quit the LDK as it entered into a coalition with former ethnic Albanian guerillas gathered in the Democratic Party of Kosovo (PDK).

Osmani is married and has twin daughters.