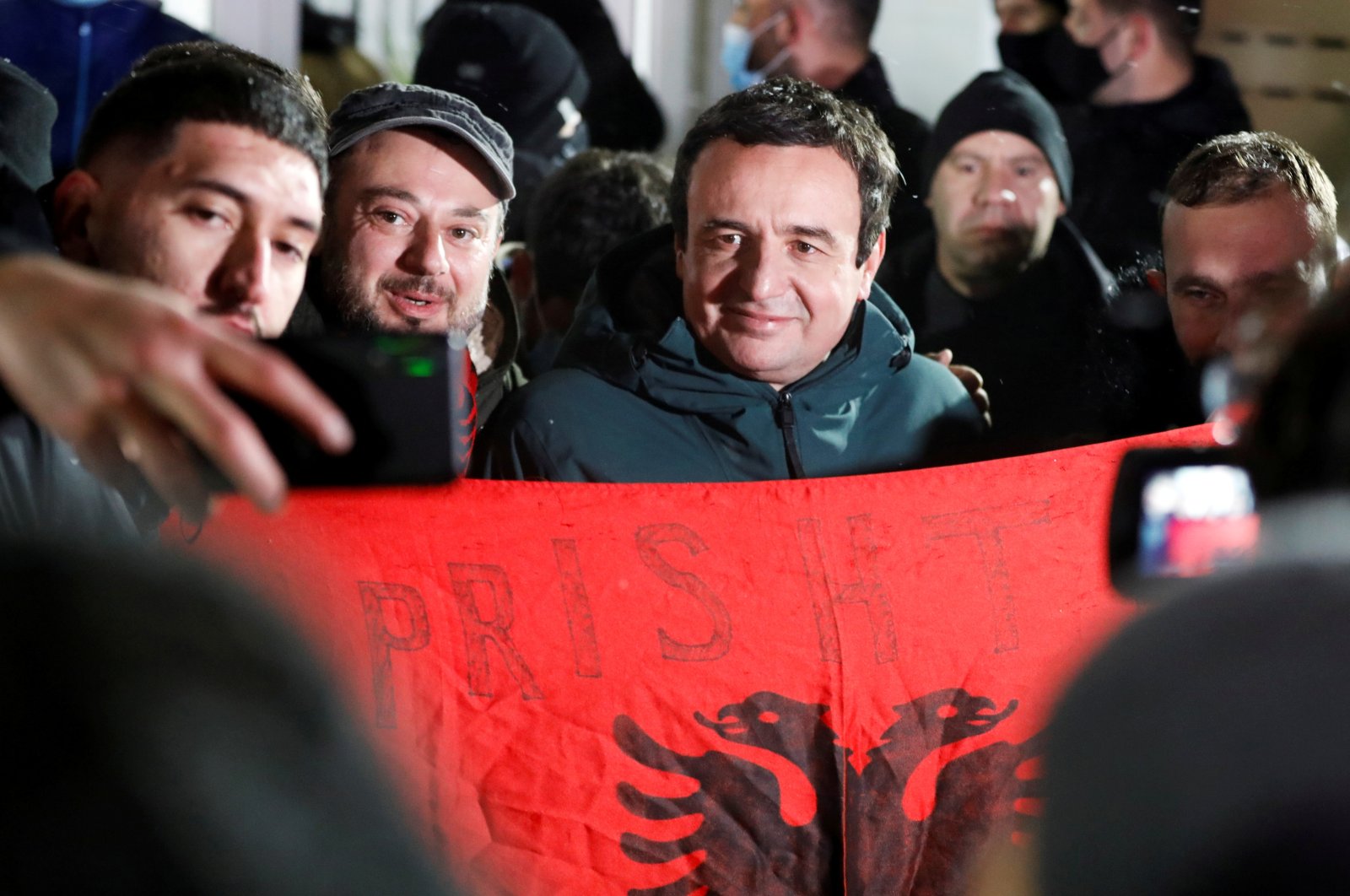 Vetevendosje! party leader Albin Kurti poses for a photo with supporters after preliminary results of the parliamentary election in Pristina, Kosovo, Feb. 15, 2021. (Reuters Photo)
by ASSOCIATED PRESS Feb 15, 2021 11:44 am
RECOMMENDED

Kosovo’s main opposition party has won a clear victory in an early election held amid the coronavirus pandemic, an economic downturn and stalled negotiations with wartime foe Serbia.

With 98% of the votes counted Monday, the left-wing Determination Movement Party, or Vetevendosje!, had 48%. That left it far ahead of the center-right Democratic Party of Kosovo (PDK) with 17% and the conservative governing Democratic League of Kosovo (LDK) with 13%, which both conceded defeat.

Turnout was 47%, or 2.5% higher than the 2019 election, according to the Central Election Commission, the main election body. Vetevendosje! leader Albin Kurti, who is expected to be the prime minister, faces the challenge of putting the impoverished country’s economy back on its feet and reducing unemployment after battling back the pandemic as well as fighting organized crime and corruption.

The victory, however, may not give Kurti the required 61 seats in the 120-seat parliament to create a Cabinet on his own. He made it clear there would be no coalition with the main losing opponents.

The election was scheduled after Kosovo’s Constitutional Court rendered invalid a vote by a convicted lawmaker who helped confirm LDK’s Acting Prime Minister Avdullah Hoti’s Cabinet named in June after Kurti was removed as prime minister.

Kosovo’s Serb minority has 10 seats in parliament and 10 other seats belong to other minorities. Negotiations on normalizing ties with Serbia, which stalled again last year after talks brokered by the U.S. and the European Union, did not figure high on Vetevendosje!’s agenda. Kurti said that forming a negotiating team for dialogue would not be a priority of his government.

The European Union sent monitors to watch the vote. Kosovo declared independence from Serbia in 2008, a decade after a brutal 1998-1999 war between separatist ethnic Albanian rebels and Serb forces. The war ended after a 78-day NATO air campaign drove Serb troops out and a peacekeeping force moved in.

Most Western nations have recognized Kosovo, but Serbia and its allies Russia and China do not. Tensions over Kosovo remain a source of volatility in the Balkans.

Within two months of taking their seats in parliament, Kosovo’s lawmakers must elect the country’s president. If no candidate is elected after three rounds of voting, the country could be forced to hold another early parliamentary election.