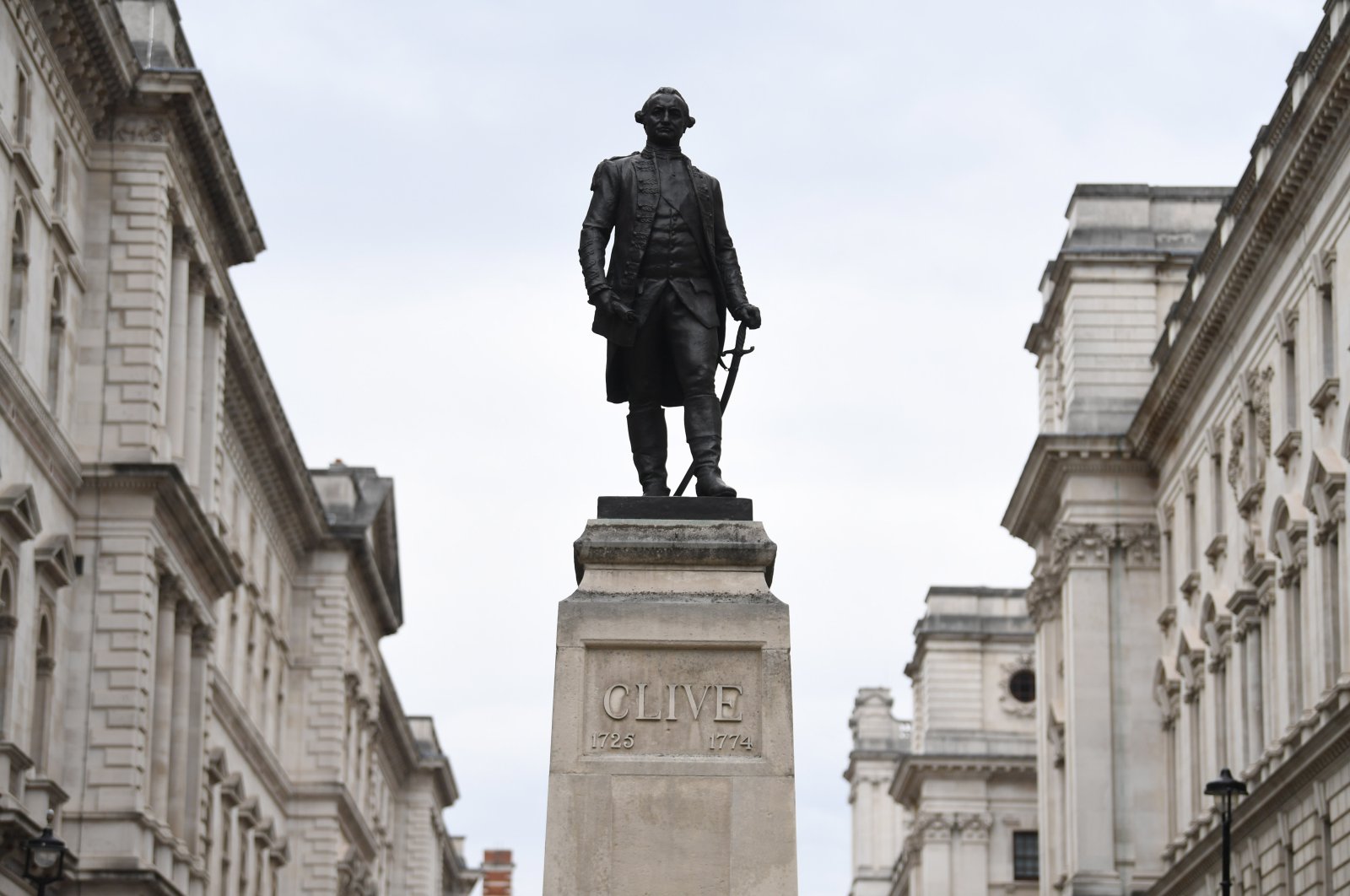 A statue of Robert Clive is displayed in Whitehall in London, Britain, on 10 June 2020. Clive was the Governor of Bengal and helped the British Empire gain control of large areas of India. (EPA Photo)
by ASSOCIATED PRESS Jun 10, 2020 10:09 pm
RECOMMENDED

London's mayor announced Tuesday that more statues of imperialist figures could be removed from Britain’s streets after protesters knocked down the monument to a slave trader, as the killing of George Floyd in Minneapolis continued to spark protests – and drive change – around the world.

On the day Floyd was buried in his hometown of Houston, Texas, London Mayor Sadiq Khan said he was setting up a commission to ensure the British capital's monuments reflected its diversity. It will review statues, murals, street art, street names and other memorials and consider which legacies should be celebrated, the mayor’s office said.

"It is an uncomfortable truth that our nation and city owes a large part of its wealth to its role in the slave trade and while this is reflected in our public realm, the contribution of many of our communities to life in our capital has been willfully ignored,” Khan said.

Even before the new commission got underway, officials in east London removed a statue of 18th-century merchant and slave owner Robert Milligan from its place in the city’s docklands.

Joe Biggs, mayor of London's Tower Hamlets borough, said that following the toppling of a statue of slave trader Edward Colston by demonstrators in the city of Bristol on Sunday, "we’ve acted quickly to both ensure public safety and respond to the concerns of our residents, which I share.”

It was the latest sign that international protests of racial injustice and police violence that Floyd’s May 25 death spurred are already creating change. A white police officer who pressed a knee on Floyd's neck for more than eight minutes has been charged with murder.

Statues, as long-lasting symbols of a society’s values, have become a focus of protest around the world.

On Sunday, protesters in Bristol hauled down a statue of Colston, a 17th-century slave trader and philanthropist, and dumped in the city’s harbor.

That act revived calls for Oxford University to remove a statue of Cecil Rhodes, a Victorian imperialist in southern Africa who made a fortune from mines and endowed Oxford University’s Rhodes scholarships.

Several hundred supporters of the Rhodes Must Fall group gathered near the statue at the university's College on Tuesday, chanting "Take it down” before holding a silent sit-down vigil in the street to memorialize Floyd.

Oxford city officials urged the college to apply for permission to remove the statue so that it could be placed in a museum.

Another large statue of Rhodes that had stood since 1934 was removed from South Africa’s University of Cape Town in April 2015, after a student-led campaign that also urged the university to increase its numbers of black lecturers and to make the curriculum less Eurocentric.

In Antwerp, authorities used a crane on Tuesday to remove a statue of Belgium’s former King Leopold II that had been splattered with red paint by protesters, taking it away for repairs. It was unclear whether it would be re-erected.

Leopold took control of Congo in 1885 and enslaved much of its people to collect rubber, reigning over a brutal regime under which some 10 million Congolese died.

In Edinburgh, Scotland, there are calls to tear down a statue of Henry Dundas, an 18th-century politician who delayed Britain’s abolition of slavery by 15 years.

The leader of Edinburgh City Council, Adam McVey, said he would "have absolutely no sense of loss if the Dundas statue was removed and replaced with something else or left as a plinth.”

British Prime Minister Boris Johnson has acknowledged that it was "a cold reality” that people of color in Britain experienced discrimination, but said those who attacked police or desecrated public monuments should face "the full force of the law.”

Some historical figures have complex legacies. At weekend protests in London, demonstrators scrawled "was a racist” on a statue of Winston Churchill. Britain’s wartime prime minister is revered as the man who led the country to victory against Nazi Germany. But he was also a staunch defender of the British Empire and expressed racist views.

"Nobody’s perfect, whether it’s Churchill, whether it’s Gandhi, whether it’s Malcolm X,” he told the BBC, adding that schools should teach children about historical figures "warts and all.”

Protests continued Tuesday in cities around the world. In Britain, where more than 200 demonstrations have been held so far, people gathered in London’s Parliament Square for a vigil timed to coincide with Floyd's funeral. France has seen nationwide protests calling for greater law enforcement accountability, and more demonstrations were being held Tuesday evening.

Floyd’s death has resonated especially strongly in France’s banlieues, or suburbs, where poverty and minority populations are concentrated. Protesters marching in solidarity with U.S. demonstrations over Floyd's death have also called for justice for Adama Traore, a young man of Malian origin whose death in French police custody in 2016 is still under investigation.

Thousands of people gathered in Paris once again Tuesday evening to denounce police violence in the United States and in France. Participants knelt and observed silence in George Floyd's memory.

"It’s unacceptable that young people when they’re in contact with the police, see their life expectancy melt like snow in the sun,” a 42-year-old artist who goes by the professional name Fhemann said.

French Prime Minister Edouard Philippe has met police and citizens' groups. He said Tuesday that the code of police ethics would be reviewed. The French government has also announced that the chokehold would no longer be taught in police training.