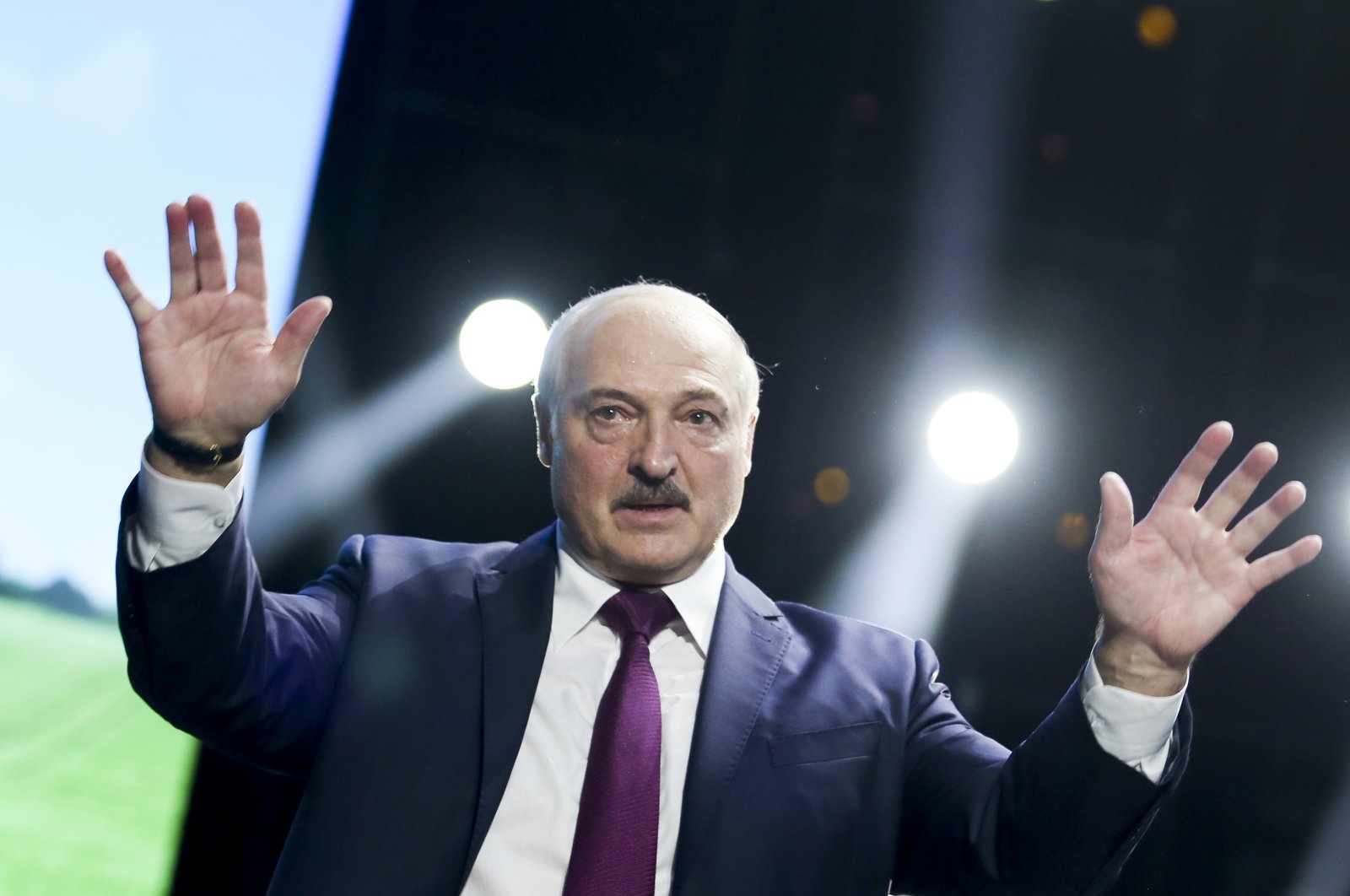 Belarusian President Alexander Lukashenko gestures as he addresses a women's forum in Minsk, Belarus, Sept. 17, 2020. (TUT.by via AP)
by DAILY SABAH WITH AGENCIES May 26, 2021 1:23 pm
RECOMMENDED

Belarusian President Alexander Lukashenko said Wednesday that he had not known that dissident blogger Roman Protasevich was on board the Ryanair flight that was diverted to Minsk and that he would have given the order to ground it had he known.

In his first public statement since the Ryanair flight was diverted and opposition journalist Roman Protasevich arrested on Sunday, Lukashenko dismissed the international outcry the incident provoked, lashing out at critics at home and abroad.

"I acted lawfully to protect our people," Lukashenko said in an address to parliament, the state-run news agency Belta reported. The criticism was nothing more than another attempt by his opponents to undermine his rule, he said.

"Our ill-wishers at home and abroad have changed their methods of attacking the state," Lukashenko said. "They have crossed many red lines and crossed boundaries of common sense and human morality."

Lukashenko – often dubbed "Europe's last dictator" – is facing some of the strongest international pressure of his 26-year rule of ex-Soviet Belarus. The strongman and his allies are already under a series of Western sanctions over a brutal crackdown on mass protests that followed his disputed reelection to a sixth term last August. European leaders are now accusing authorities in Minsk of essentially hijacking the passenger flight, and they agreed this week to cut air links with Belarus and told airliners to avoid the country's airspace.

Speaking in parliament, Lukashenko called Protasevich a "terrorist" and asserted that “it was known far beyond the borders of the Republic of Belarus.”

“Let the Western defenders answer: what special services did the two detainees work for? Who paid the bastard who killed people in fraternal Ukraine?" Lukashenko asked, according to Russian news website Lenta.ru.

The Belarusian opposition has called for further and stronger measures, and the U.N. Security Council (UNSC) was set to meet behind closed doors later on Wednesday.

The Athens-to-Vilnius flight was diverted over a supposed bomb scare, with Lukashenko scrambling a MiG-29 fighter jet to accompany the aircraft. Belarus has released a transcript of communications between Minsk air traffic control and the Ryanair flight, in which the crew was told "you have a bomb on board" and urged to land in Minsk. Lukashenko on Wednesday denied that the fighter jet had forced the airliner to land, calling such claims an "absolute lie."

Protasevich – the 26-year-old co-founder of opposition Telegram channel Nexta – and his Russian girlfriend Sofia Sapega were arrested after the plane landed. Protasevich, who had been living between Poland and Lithuania, appeared in a video on Monday in which he confessed to helping organize mass unrest, a charge that could land him in jail for 15 years.

Sapega, a 23-year-old law student at the European Humanities University (EHU) in Lithuania, appeared in another video on Tuesday, saying she worked for a Telegram channel that disclosed information about Belarusian police.

Her lawyer said she had been ordered held for two months of pre-trial detention and Russia confirmed she was being detained as a criminal suspect. Belarus's opposition says such videos are routinely recorded by security forces, with participants forced to make statements under duress.

'They're going to kill him'

Protasevich's mother told Agence France-Presse (AFP) in Poland that she had not slept since he was arrested.

"I'm asking, I'm begging, I'm calling on the whole international community to save him," Natalia Protasevich said, weeping. "They're going to kill him in there."

EU leaders on Monday warned they would adopt further "targeted economic sanctions" against the Belarusian authorities to add to the 88 regime figures and seven companies on a blacklist.

Last year's protests lasted for months, with tens of thousands taking to the streets to denounce Lukashenko, but were brutally quashed and thousands were detained – many of whom reported torture and abuse in custody.

Many protest leaders – including now-exiled opposition leader Sviatlana Tsikhanouskaya, who claimed victory in the August vote – fled the country, and the demonstrations have dwindled. Tsikhanouskaya this week urged Europe and Washington to take stronger action against Lukashenko's regime, but he continues to enjoy solid support from Russia.

Lukashenko said in televised comments that he believed there would be no repeat of the mass protests that erupted last summer, as Reuters reported. The comments came shortly after Tsikhanouskaya said Lukashenko's opponents were preparing to stage a new phase of active anti-government protests in the country.

Speaking to the European Parliament via video link on Wednesday, Tsikhanouskaya called for a series of concrete measures, including a ban on new foreign investments and on Belarus's main exports like oil and metal products, potash fertilizers and wood.

Diplomatic sources told Agence France-Presse (AFP) the U.N. Security Council would hold an informal meeting on Belarus on Wednesday but was unlikely to agree on a collective statement because of Russia's support for Minsk.