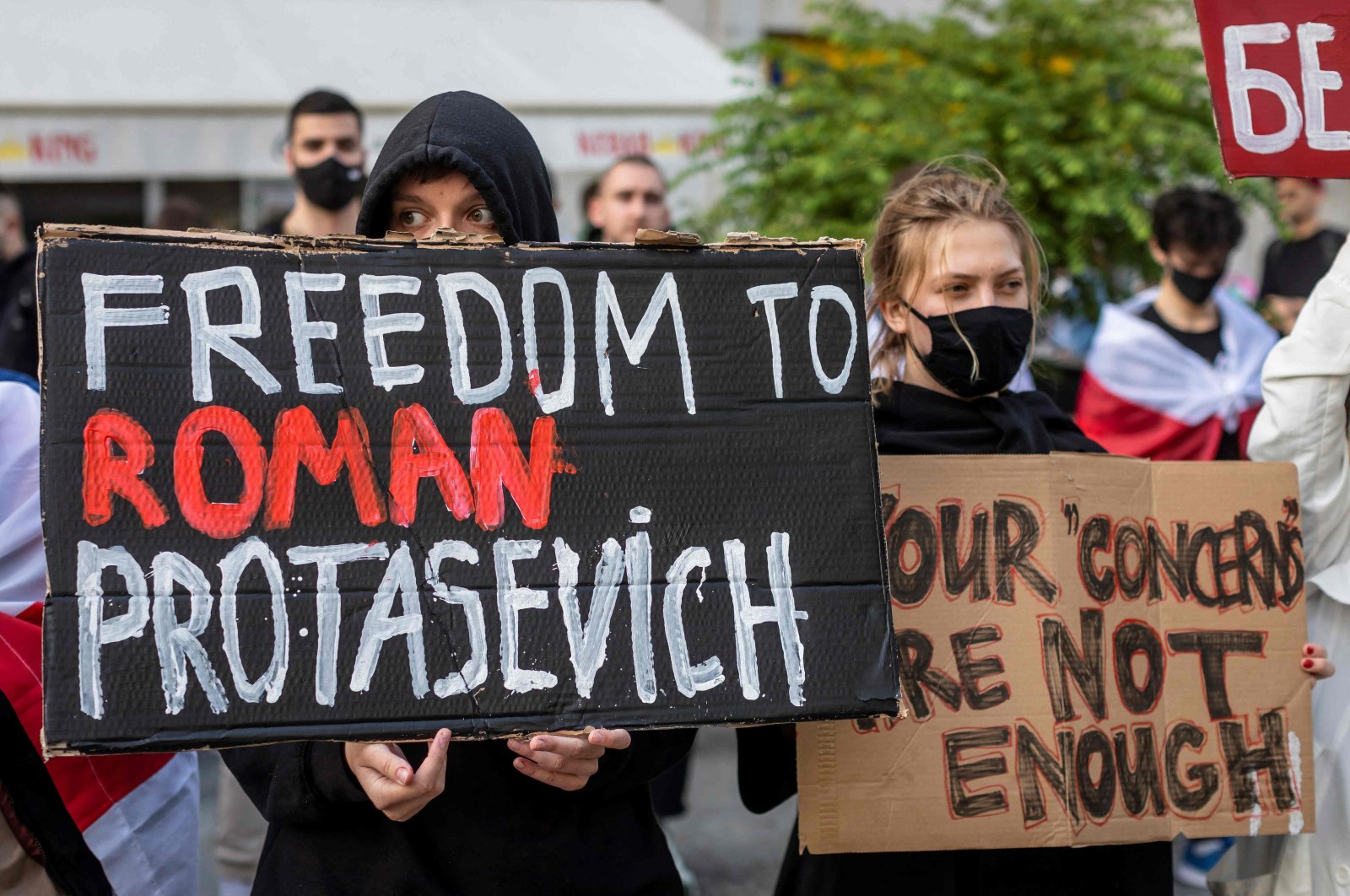 Belarusians living in Poland and Poles supporting them hold up a placard reading 'Freedom to Roman Protasevich' during a demonstration in front of the European Commission Office in Warsaw, Poland, May 24, 2021. (AFP Photo)
by Agencies May 25, 2021 10:55 am

The European Union agreed on a spate of sanctions against Belarus, including a ban on the use of airspace and airports, amid fury over the forced diversion of a passenger jet flying between two European Union countries in order to arrest the main critic of Belarus’s authoritarian President Alexander Lukashenko.

In the Brussels' meeting the 27 national leaders of the bloc demanded the immediate release of dissident journalist Roman Protasevich, as well as an investigation by the International Civil Aviation Organization (ICAO) into the Sunday incident during which Belarus forced a Ryanair flight to land in Minsk.

"We are closing our airspace to planes from Belarus and call on EU airlines not to fly over the country," said the head of the bloc's executive, European Commission President Ursula von der Leyen. "Further economic sanctions will be presented soon."

The EU currently has a travel ban and an asset freeze in place on 88 Belarusians, including Lukashenko, and seven companies, over Minsk's crackdown on protests following a contested presidential election last year. Further individual sanctions could target oligarchs bank-rolling Lukashenko, diplomats said. Lithuanian President Gitanas Nauseda said the new restrictions must be put in place immediately.

Air France, Finnair and Singapore Airlines became the latest carriers to suspend flights over Belarus on Tuesday after Minsk forced the jet to land to arrest the dissident. Air France said in a statement it had "taken note" of the conclusions of Monday's EU summit and had suspended flights over Belarus "until further notice." Planes already in the air will have their flight plans modified, the French company said.

Singapore Airlines was also rerouting flights "that are bound for Europe to avoid the Belarusian airspace" and would continue to "closely monitor the situation," a spokesperson said. "The safety of our customers and crew is our top priority," a spokesperson told Agence France-Presse (AFP).

Finnair said the next flight that will be affected by its decision to reroute planes is one that was heading to the Turkish coastal town of Gazipasa on Wednesday. Scandinavian airline SAS, Germany's Lufthansa and Latvia-based regional airline Air Baltic made similar announcements on Monday.

The United Kingdom also issued instructions for British aircraft to avoid Belarusian airspace, while Ukraine decided to halt direct flights between the two countries and over Belarus. Polish airline LOT said it will not fly in Belarus airspace and has suspended flights to the capital Minsk, the company's press office said on Tuesday, confirming a report from state-run news agency PAP.

"Due to the situation in Belarus, LOT has suspended connections to Minsk and has found alternative routes for flights crossing Belarusian airspace," a representative of the press office told Reuters by telephone.

Western leaders have accused Belarusian authorities of essentially hijacking a European plane, while Minsk claimed it had reacted to secure the flight after receiving a bomb threat.

Exiled Belarusian opposition leader Svetlana Tikhanovskaya on Tuesday called on Washington and the G7 to ramp up pressure on Belarus's government. In a call with U.S. National Security Advisor Jake Sullivan, Tikhanovskaya "called on the United States to isolate the regime and pressure it through sanctions," she said on Twitter.

Separately, in a post on her Telegram channel, Tikhanovskaya said that she asked for the opposition to be invited to next month's G7 summit in Britain's Carbis Bay.

"The situation with the hijacking of the plane cannot be considered separately from other repressions and flagrant violations of human rights in Belarus," she said.

Tikhanovskaya also suggested discussions at the G7 summit "with the participation of the Belarusian democratic forces" and called for an international conference to resolve the political crisis that erupted in Belarus last year.

The ex-Soviet country was gripped by months of historic demonstrations following a disputed presidential election in August 2020 that saw Lukashenko elected for a sixth term. The 66-year-old leader has ruled Belarus with an iron fist for over two decades and responded to the demonstrations with a violent crackdown, detaining thousands, many of whom reported torture and abuse in custody.

In a video posted online, the detained blogger, Roman Protasevich, 26, said he was being held in a pretrial detention facility in Minsk, and acknowledged having played a role in organizing mass disturbances in the capital last year. In the video on a pro-government channel on the Telegram messaging app, he wore a dark sweatshirt and clasped his hands tightly in front of him. Protasevich said he was cooperating with investigators and wanted to make further confessions. He also denied he had health problems, after rumors circulated on social media that he had been hospitalized. The comments were immediately dismissed by his allies, including his father, as having been made under duress. Tikhanovskaya said there was "no doubt that Roman was being tortured in prison."

A Russian woman was also detained alongside Protasevich, the Russian embassy in Minsk said on Facebook. Multiple media outlets have reported that the woman is Protasevich's partner. Tikhanovskaya expressed concern for the two. She said Protasevich's partner Sofia Sapega had been taken to the notorious Okrestina prison in Minsk, citing Sapega's relatives.

Leaders worldwide were outraged at what they called a "state hijacking" of a civilian airliner to go after a critic. United Nations Secretary-General Antonio Guterres called for the dissident's immediate release and a full investigation into his arrest, as the Deutsche Presse-Agentur (DPA) reported. He said he was "deeply concerned" about what he described as a "disturbing incident," and called on all parties to participate in a "complete, transparent and independent investigation," according to a statement.

Earlier on Monday, countries including Germany, the U.K., Belgium, Italy and the Czech Republic summoned Belarusian envoys to discuss the forced landing. Belarus, meanwhile, expelled all of Latvia's embassy staff after officials in Riga hoisted the historic Belarusian flag that has become a symbol of the opposition, instead of flying the country's official flag. Latvia expelled Belarusian diplomats in a tit-for-tat response.

After widespread criticism, a Belarusian Foreign Ministry spokesperson said the former Soviet country was open to an international investigation into the forced landing, but defended Belarus' actions, saying it had fully complied with international regulations, and rejected EU criticism.

Russia also supported an international investigation. Kremlin spokesperson Dmitry Peskov urged a "sober assessment" of the incident, noting that there are already calls for sanctions after a procedure which, he says, went according to international guidelines.

"We don't want to get involved in this race of condemning someone or supporting something," he said.

Belarusian state media reported that the plane's diversion came on Lukashenko's personal instructions after he had purportedly been alerted to a possible bomb on board. He also ordered a MiG-29 fighter jet be scrambled to accompany the Ryanair plane, according to the Belta news agency.

Protasevich's father, Dmitry, said in an interview with Belarusian radio broadcaster Radio Svoboda that he was convinced that the operation did "not only involve" the country's secret service, hinting at Moscow's involvement.

"The operation was of a large enough scale to spit on the entire international community and their opinion," added the dissident's father, who called the forced landing "an act of terrorism."

The U.K. seemed to echo this assessment. Foreign Minister Dominic Raab said in parliament that it was difficult to believe that the events could have taken place without Russian support.

"But we don't know – It is just the proximity of the relationship between Minsk and Moscow," he said.

U.S. President Joe Biden condemned the forced diversion and arrest of Protasevich, calling the case a "direct affront to international norms." He echoed calls for an international investigation and said he had asked his team to develop appropriate options for economic sanctions and other measures in close coordination with the EU and other partners.