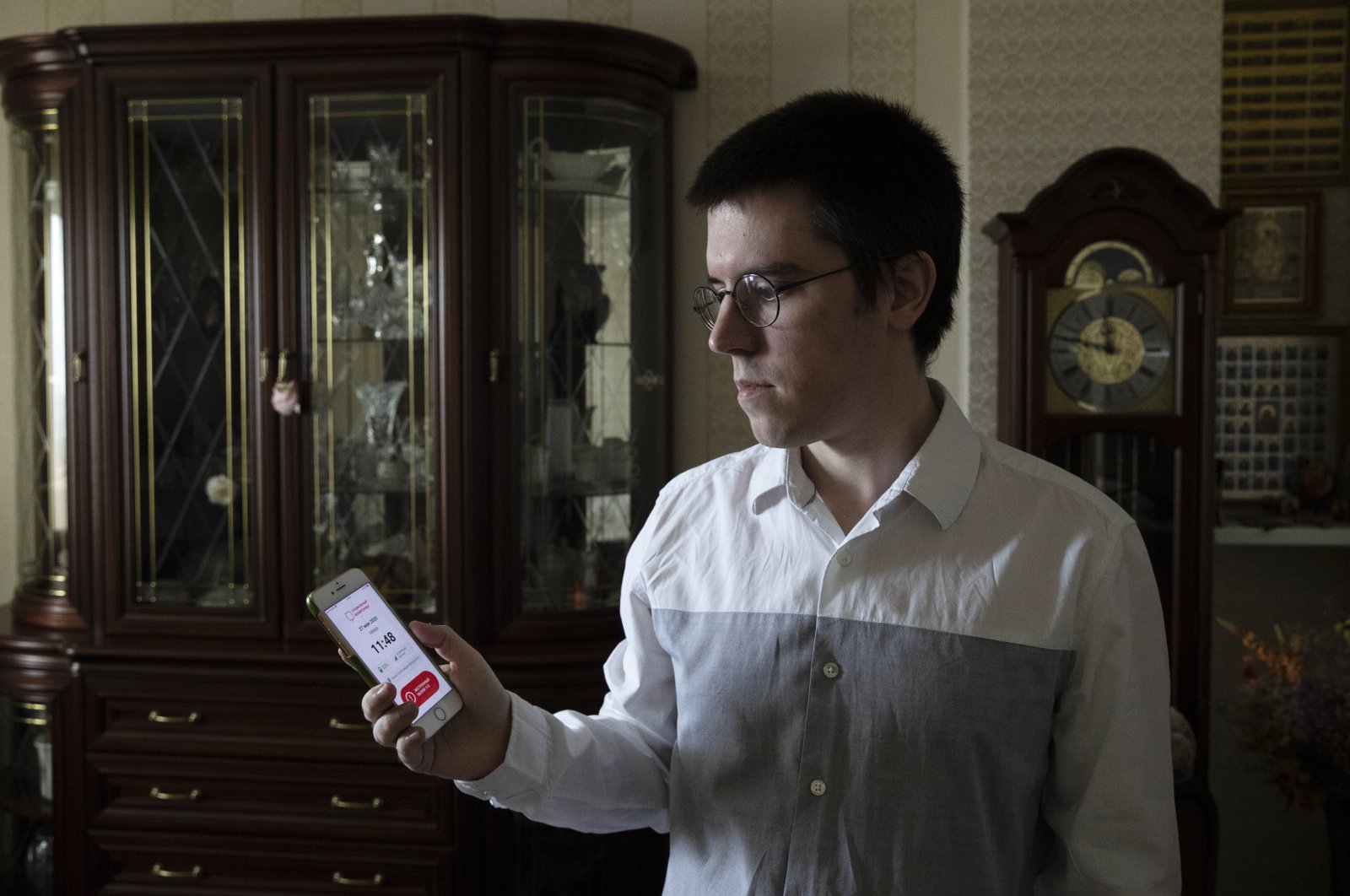 Vladimir Perevalov shows a Social Monitoring app installed on his phone in his apartment in Shcherbinka, outside Moscow, Russia, May 27, 2020. (AP Photo)
by ASSOCIATED PRESS Jun 02, 2020 2:02 pm
RECOMMENDED

When nurse Maria Alexeyeva caught coronavirus at work, she isolated herself at home and followed the rules set down by Moscow authorities: She checked in with doctors regularly, didn’t leave her apartment and downloaded a smartphone app required by the city to keep tabs on quarantined patients.

The Social Monitoring app tracks users via GPS and sends them random notifications demanding a selfie to prove they’re still at home. If it detects they’ve left home or they fail to provide a photo, they face a fine of about $56 each time.

But soon the app became a nightmare for Alexeyeva. It crashed when she tried to take a photo. Weak with illness, she struggled with the software for days, sometimes on hold for hours with technical support. And when her quarantine ended, she discovered she had accumulated 11 fines totaling $620.

“That’s more than my monthly wage,” Alexeyeva told The Associated Press (AP). “This quarantine has been hard on me. And now I have to deal with this on top of it.”

Thousands of Muscovites also complain they have been wrongfully fined by the quarantine app. In slightly over a month, authorities issued some 54,000 fines, totaling $3 million among its nearly 70,000 registered users.

Authorities insist the fines were justified, issued to those who repeatedly violated quarantine. But the app’s users say it has glitches and flaws, sometimes demanding selfies in the middle of the night, adding that the fines were dished out arbitrarily.

Moscow has been Russia’s biggest hot spot during the pandemic, recording nearly half of the country’s more than 414,000 cases. As the city of 12 million struggled to contain the outbreak, it used technology that later drew widespread criticism.

But the biggest complaints focus on the Social Monitoring app, which was rolled out in early April and was mandatory for those infected with the virus or suspected of having it.

Patients had to sign a form requiring them to install the app as part of their quarantine notifications, although they said they were not told how to use the app or what actions would lead to fines.

Grigory Sakharov, who self-isolated after a week in the hospital with coronavirus-induced pneumonia, was given six fines, totaling about $336. Two dated back to when he was still hospitalized, even though he didn’t install the app until after his discharge.

“I don’t mind paying a fine for something I did wrong, but I don’t understand what I’m paying for here,” Sakharov told the AP.

Svetlana Bystrova, quarantined at home with flu-like symptoms, didn’t install the app. She said her doctors didn’t tell her she had to, and she didn’t notice a clause obligating her to use the app in the quarantine order she signed.

After two weeks of strict self-isolation, Bystrova found she had been fined four times, totaling $224. One was for not installing the app, two said it detected her outside her apartment, and one was for not giving details of her wrongdoing.

“The one for not installing the app I get, fair enough,” Bystrova said. “But how can the app I never installed track my movements?”

Vladimir Perevalov, who installed the app and diligently took selfies, was fined three times for $168. The app never sent him any notifications, he said.

The outrage has mounted as tales of arbitrary fines mushroomed on social media. By the end of May, authorities got over 2,500 complaints contesting the fines, and more than 200 lawsuits were filed. Three online petitions demanding to abolish the app got over 94,000 signatures.

Tanya Lokshina, associate director for Human Rights Watch’s Europe and Central Asia division, said while many countries use mobile tracking apps, she hasn’t seen one getting so many complaints.

“The situation is absurd. It’s insane,” Lokshina said. “Instead of serving to contain the epidemic, it in fact serves ... to punish law-abiding citizens who actually attempt to play by the rules.”

On May 21, Human Rights Watch (HRW) urged Moscow authorities to drop the app, noting that on top of the arbitrary fines, Social Monitoring violated users’ privacy by accessing their location, calls, camera, network information and other data.

But Alexei Nemeryuk, the mayor’s deputy chief of staff, said there will be no amnesty, noting, “There’s a system for contesting the fines.”

That has proved unsuccessful, said Leonid Solovyov of the Apologia Protesta legal aid group, which is working with over 100 people who were fined. He said those who are fined must provide proof they did nothing wrong, which is difficult, while authorities are basing the punishment on data from the app.

“Some fines are indeed being overruled,” Solovyov told AP, but only the “most egregious cases.”

City Hall has said it was canceling 468 fines for failing to take a selfie because the app made those requests in the middle of the night.

Another high-profile case involved Irina Karabulatova, a bed-ridden professor who hasn’t left her apartment in a year and got two fines for not installing the app. After her story made national headlines, the fines were canceled and officials apologized.

“They canceled my (fines) because journalists stood up for me,” Karabulatova told AP. “But what is going to happen to the others is a big question.”

On Thursday, Sakharov started receiving messages saying his fines were canceled. Alexeyeva, the nurse, also was contacted by officials who promised to lift all her fines.

Then, Alexeyeva’s mother was notified she was being fined. Social Monitoring detected her leaving the apartment.

“My mother was quarantined with me. She didn’t sign (a document) that had a clause on using Social Monitoring, and she doesn’t have the app,” Alexeyeva said. “Looks like we got excited too soon.”