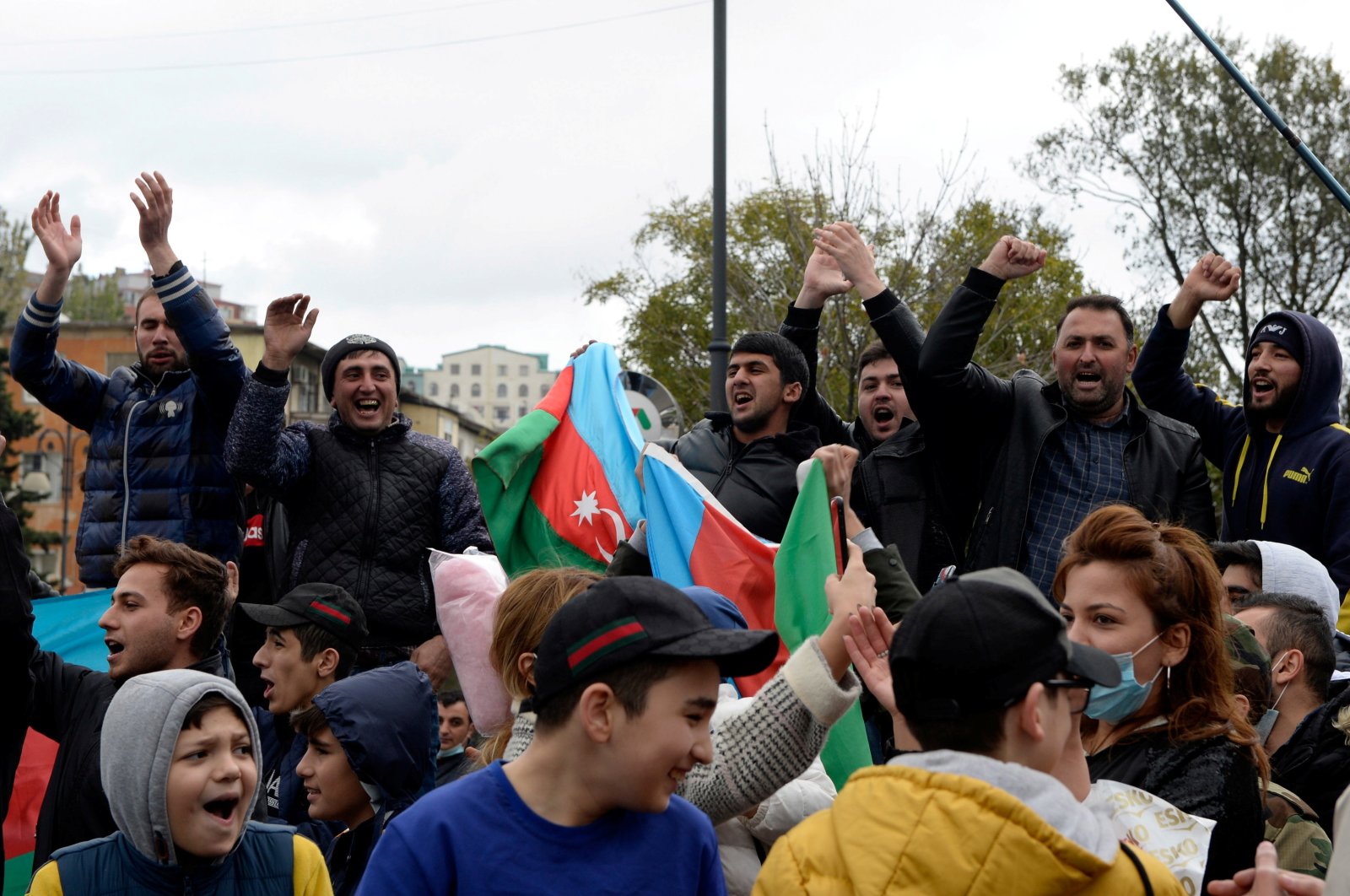 People celebrate on the streets after Azerbaijani President Ilham Aliyev said the country's forces had taken Shusha, during the fighting over the region of Nagorno-Karabakh, in Baku, Azerbaijan, Nov. 8, 2020. (Reuters Photo)
by DAILY SABAH WITH AA
Nov 12, 2020 10:44 am

The Muslim call to prayer, known as the adhan, was heard Wednesday in Nagorno-Karabakh's symbolic city of Shusha for the first time in nearly three decades.

Shusha was occupied by Armenian forces on May 8, 1992. The town has significant military value due to its strategic location about 10 kilometers (6 miles) south of the region’s capital near Khankendi (Stepanakert) and on the road linking the city with Armenian territory.

Gaining control of Shusha was a major victory for Azerbaijani forces on their way to a cease-fire signed Nov. 10, seen as a victory for Baku in the conflict over the Armenian-occupied Nagorno-Karabakh region.

Azerbaijani President Ilham Aliyev announced on Nov. 8 that Shusha had been liberated from Armenian occupation.

"After 28 years, the adhan (call to prayer) will be heard in Shusha," Aliyev, wearing a military uniform, said in an address to the nation.

"We proved to the world Nagorno-Karabakh is historical Azerbaijani lands," he said.

"Our victory march continues. If the Armenian leadership does not respond to my demands, we will go till the end," Aliyev said in his speech in the Alley of Martyrs in the capital Baku.

Azerbaijan and Armenia have been locked in a bitter conflict over Nagorno-Karabakh since Armenian separatists backed by Yerevan seized control of the mountainous province in a 1990s war that left 30,000 people dead.

Nagorno-Karabakh's self-declared independence has not been recognized internationally, even by Armenia, and it remains a part of Azerbaijan under international law.

The heaviest fighting since a 1994 cease-fire erupted on Sept. 27 and persisted for over a month despite intense diplomatic efforts to bring it to a halt. Azerbaijan's victory became official Monday as Armenia agreed to accept its defeat through a peace deal that confirms the withdrawal of its troops from the Nagorno-Karabakh region.