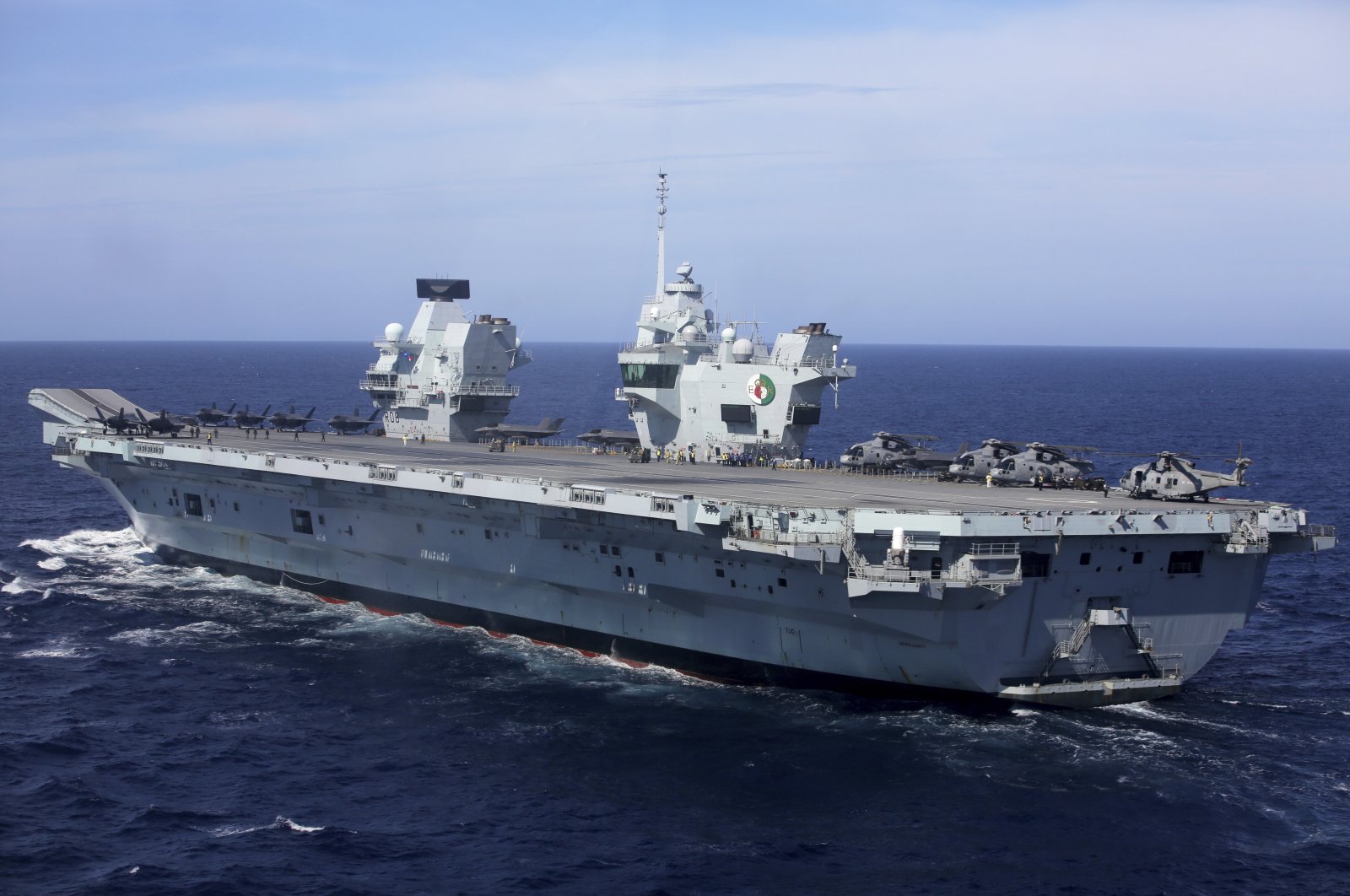 Military personnel participate in the training exercise NATO Steadfast Defender 2021 on board the aircraft carrier HMS Queen Elizabeth off the coast of Portugal, May 27, 2021. (AP Photo)
by ASSOCIATED PRESS May 28, 2021 12:09 pm
RECOMMENDED

Against the backdrop of Russia's huge military buildup over the past month near Ukraine's borders and Crimea, NATO announced the launch of military exercises that will stretch across the Atlantic, through Europe and into the Black Sea region.

Thousands of NATO troops, several warships and dozens of aircraft are taking part in military drills. The war games, dubbed Steadfast Defender 2021, are aimed at stimulating the 30-nation military organization’s response to an attack on any one of its members. It will test NATO’s ability to deploy troops from the U.S. and keep supply lines open.

Already in recent years, the United States and its allies have deployed troops and equipment in Estonia, Latvia, Lithuania and Poland to try to reassure those members neighboring Russia that their partners will ride to the rescue should they come under attack.

Russia’s decision last month to send thousands of troops to the border area with Ukraine raised concern within the military alliance, which launched one of its biggest-ever defense spending initiatives after Russian troops annexed Ukraine’s Crimean Peninsula in 2014.

Top NATO brass insists that the military exercises, involving some 9,000 troops from 20 nations, are not aimed at Russia specifically, but they focus on the Black Sea region, where Russia stands accused of blocking the free navigation of ships.

"NATO is there to defend all our allies, and this exercise sends a message about our ability to transport a large number of troops, equipment across the Atlantic, across Europe and also to project maritime power,” Stoltenberg told The Associated Press (AP) aboard a British aircraft carrier off the coast of Portugal. The ship, the HMS Queen Elizabeth, is the pride of the British Navy.

It making its maiden voyage and carrying 18 F-35 jets: the first-ever deployment of so many of the fifth-generation planes aboard an aircraft carrier. The ship’s presence, part of a six to seven month deployment that will take it south past India, through Southeast Asia to the Philippines Sea, is aimed in part at restoring Britain’s tarnished image as a major global power since it left the European Union.

Adorned with high-tech U.S. jets and flanked by warships from other NATO countries, the carrier strike force also stands as an important symbol of unity as the world’s largest security organization tries to recover from four tumultuous years under the Trump administration.

Stoltenberg will chair a NATO summit in Brussels on June 14 with current U.S. President Joe Biden and his counterparts keen to usher in a new era of trans-Atlantic cooperation as troops leave its longest-ever mission in Afghanistan and tensions with Russia, and increasingly China, mount. The war games tie in two new NATO command centers, one in Norfolk, Virginia, and the other in Ulm, Germany.

Part of the focus of its first phase is to protect the undersea cables that carry masses of commercial and communications data between the U.S. and Europe. NATO says Russia is mapping the cables’ routing and might have darker intentions.

"We all lulled ourselves into thinking that the Atlantic was a benign region in which there was not anything bad going on, and we could just use it as a free highway,” Norfolk’s commander, U.S. Navy Vice-Admiral Andrew Lewis said. "There are nations are out there mapping those cables. They may be doing something else bad. We have to be aware of that and answer that."

NATO says its policy toward Russia is based on two pillars: strong military deterrence and dialogue. But high-level meetings between the two historic foes are rare, and European officials insist that President Vladimir Putin is turning increasingly authoritarian and distancing himself from the West.

"We’re ready to sit down with Russia because we think it’s important to talk, especially when times are difficult,” Stoltenberg said. "The main challenge now is that Russia has not responded positively to our invitation, or our initiative, for a meeting of the NATO-Russia Council,” their top consultative forum.