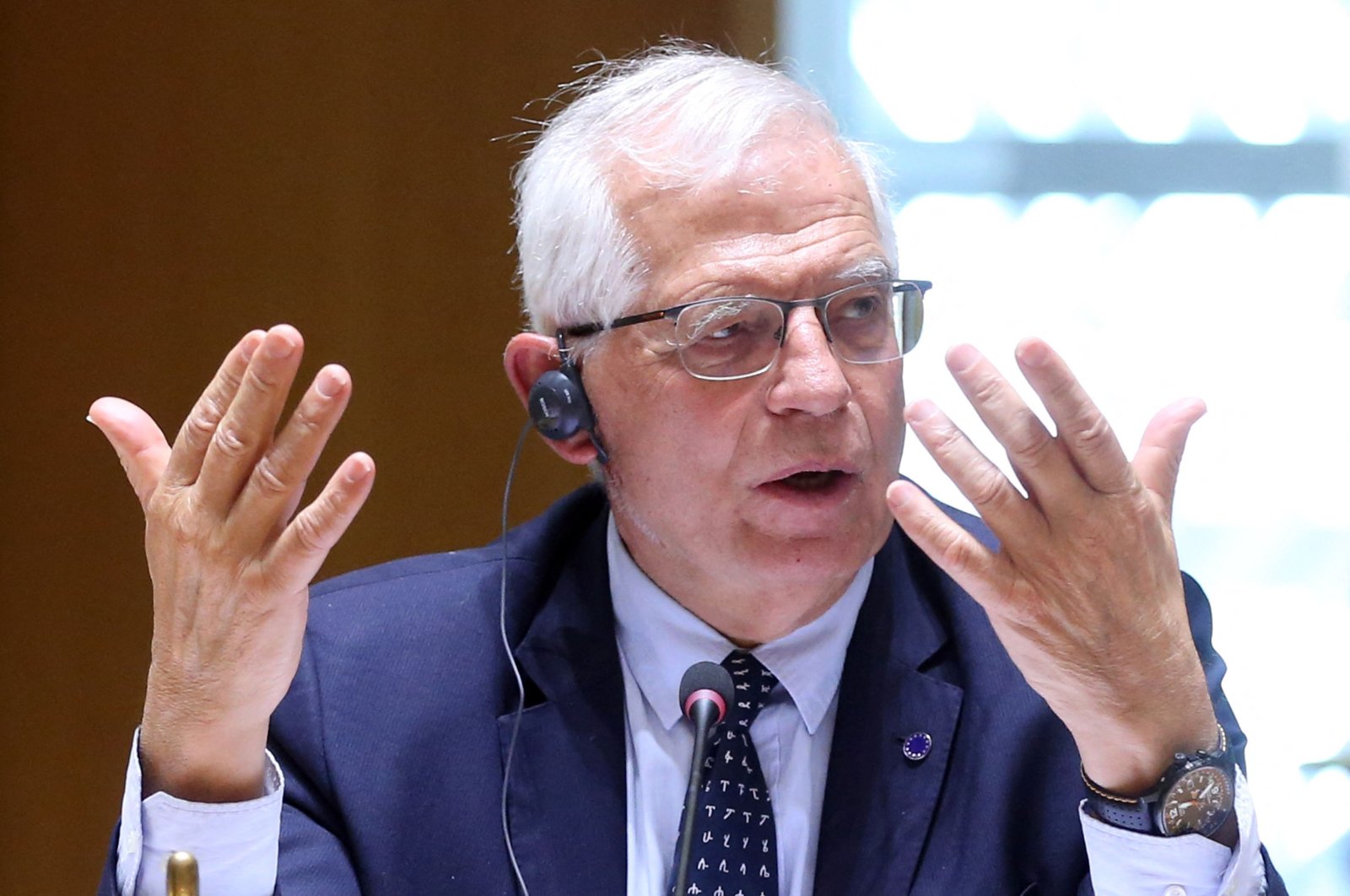 European High Representative of the Union for Foreign Affairs Josep Borrell speaks during a meeting via video with European Foreign Affairs Ministers to discuss the situation in Ukraine, at the European Council in Brussels, Belgium, April 19, 2021. (AFP Photo)
by Agencies Apr 19, 2021 4:49 pm
RECOMMENDED

EU foreign policy chief Josep Borrell said Monday Russia has massed over 150,000 troops along the Ukrainian border and in the annexed Crimea Peninsula as the bloc's foreign ministers were assessing strategy toward Moscow in the wake of the military buildup.

Borrell said no new economic sanctions or expulsions of Russian diplomats were planned for the time being, despite saying the military build-up on Ukraine's borders was the largest ever, as Reuters reported.

"It is the highest Russian military deployment at Ukrainian borders ever," Borrell told journalists. "The risk of further escalation, it's evident," he warned.

"I proposed a step-by-step plan on how to discourage Moscow from further escalation," Kuleba tweeted. "Key element: preparing a new set of sectoral sanctions. Individual ones are not sufficient anymore."

Twenty-seven foreign ministers had a video conference with Kuleba to underscore Western support for the government, amid escalating tensions in the country’s east and a Russian troop buildup across the border. On Sunday, Kuleba asked for stronger Western backing, saying "words of support aren’t enough.” Kuleba spoke with his Baltic counterparts who are expected to back his call during Monday's meeting. "We call on Russia to withdraw their troops,” said Borrell, according to The Associated Press (AP).

More than 14,000 people have died in seven years of fighting between Ukrainian forces and Russia-backed separatists in eastern Ukraine that erupted after Russia’s 2014 annexation of Ukraine's Crimean Peninsula.

The EU has steadfastly opposed the annexation but has been unable to do anything about it. Efforts to reach a political settlement have stalled and violations of a shaky truce have become increasingly frequent in recent weeks across Ukraine's eastern industrial heartland known as the Donbass.

On top of that, the diplomatic standoff between EU member state the Czech Republic and Russia over tit-for-tat diplomatic expulsions following Prague's accusation that Moscow was involved in a 2014 ammunition depot explosion, is adding further tension between both sides. Diplomats said there was little to no chance of immediate new sanctions on Moscow, but they will seek to apply pressure nevertheless.

In Germany, some politicians have called for an end to the Nord Stream 2 gas pipeline project with Russia. And over the weekend, French President Emmanuel Macron said that while dialogue with Russia is essential, "clear red lines” carrying possible sanctions must also be drawn with Moscow over Ukraine.