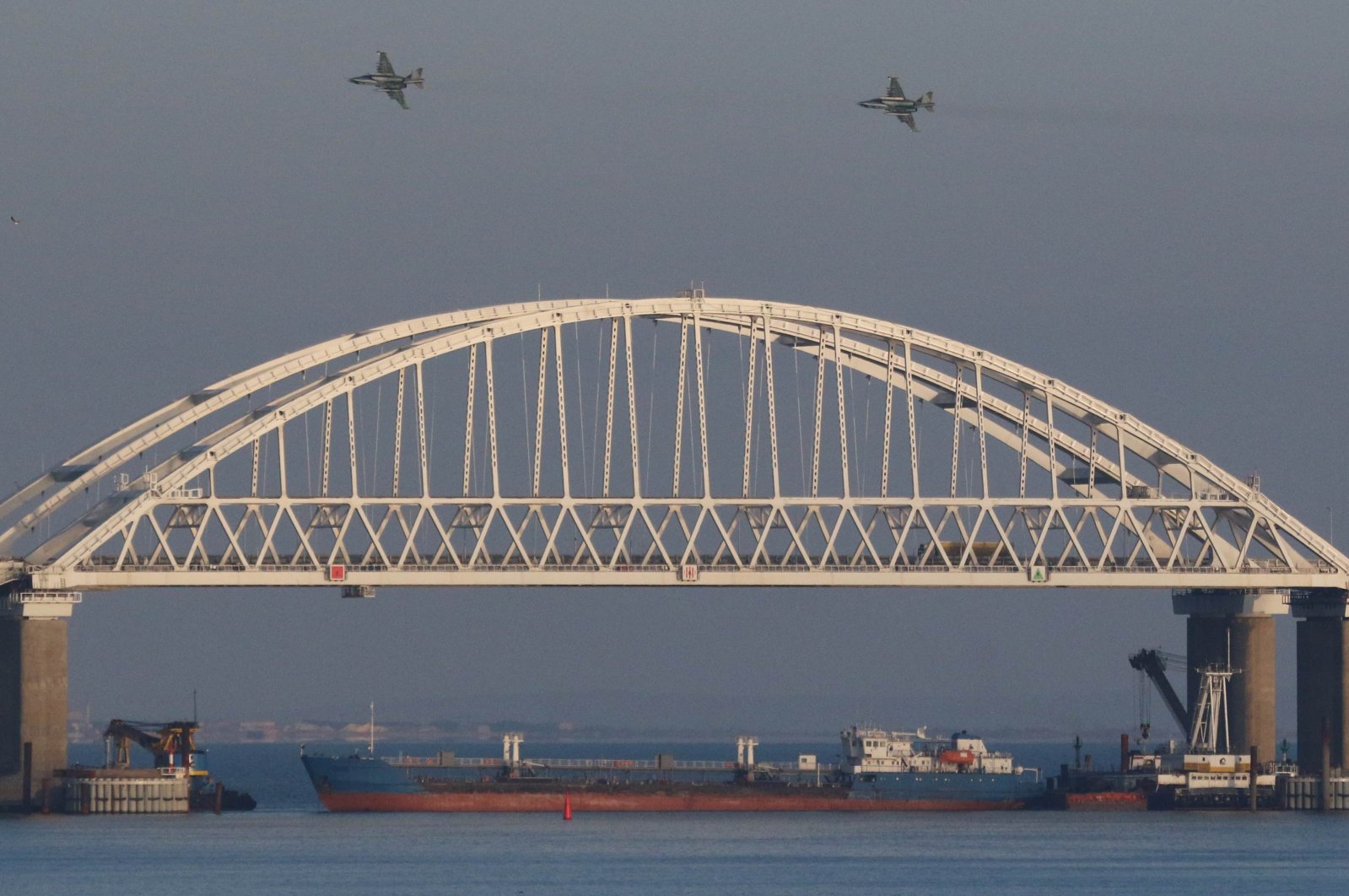 Russian jet fighters fly over a bridge connecting the Russian mainland with the Crimean Peninsula with a cargo ship beneath it after three Ukrainian navy vessels were stopped by Russia from entering the Sea of Azov via the Kerch Strait in the Black Sea, Crimea, Nov. 25, 2018. (Reuters Photo)
by Daily Sabah with AFP Apr 16, 2021 4:36 pm
RECOMMENDED

Russia will restrict the sailing of foreign military and official ships in parts of the Black Sea until November, a Russian news agency reported on Friday, in a move that is likely to further exacerbate tensions with Ukraine and its western allies.

Tensions between Moscow and Kyiv have escalated in recent weeks following an uptick in fighting between Ukraine's army and pro-Russia separatists in eastern Ukraine. Russia has massed its troops along Ukraine's northern and eastern borders and on the Crimean peninsula, which Moscow annexed from Ukraine in 2014. This week Russia also conducted navy drills in the Black Sea.

According to the bulletin of the Department of Navigation and Oceanography of the Ministry of Defense of Russia, published on April 14, the Black Sea areas planned to be closed by October 31.

"From 9 p.m. on April 24 until 9 p.m. on October 31, passage through the territorial sea of the Russian Federation for foreign military ships and other state vessels will be halted," the state-run RIA Novosti news agency cited a defense ministry statement as saying.

The restrictions will affect the western tip of Crimea, the peninsula's southern coastline from Sevastopol to Hurzuf, and a "rectangle" off the Kerch peninsula near the Opuksky Nature Reserve.

The final area is near the Kerch Strait, which connects the Black Sea to the Sea of Azov and is of crucial importance for the export of grain and steel from Ukraine. The Kerch Strait became a scene of confrontation in 2018 after Russia seized three Ukrainian ships there over alleged violations of its territorial waters.

Ukraine had been free to navigate the Kerch Strait along with Russia until 2014, when Moscow claimed full control of the waterway after annexing Crimea. The Kerch Strait is also the site of a costly 19-kilometre (12-mile) bridge connecting Crimea with mainland Russia that Moscow opened in 2018.

Ukraine's foreign ministry on Thursday slammed the navigation restrictions, which were initially reported without specifics earlier this week, as a "usurpation of the sovereign rights of Ukraine."

"Such actions of the Russian Federation are another attempt, in violation of the norms and principles of international law, to usurp the sovereign rights of Ukraine as a coastal state, since it is Ukraine that has the right to regulate shipping in these waters of the Black Sea," the document emphasized. It also noted that this step grossly violates the right to freedom of navigation guaranteed by the United Nations Convention on the Law of the Sea, according to which "Russia must neither obstruct or halt transit through the international strait to ports in the Sea of Azov."

Ukraine called on international partners to increase pressure on Moscow in order to achieve the cancellation of the decision to close the water area and end the escalation in the Azov-Black Sea region. During a videoconference, Deputy Foreign Minister of Ukraine Emine Dzhaparova informed U.S. Deputy Assistant Secretary for Democracy, Human Rights, and Labor Kara C. MacDonald about the closure of a part of the Black Sea water area by Russia.