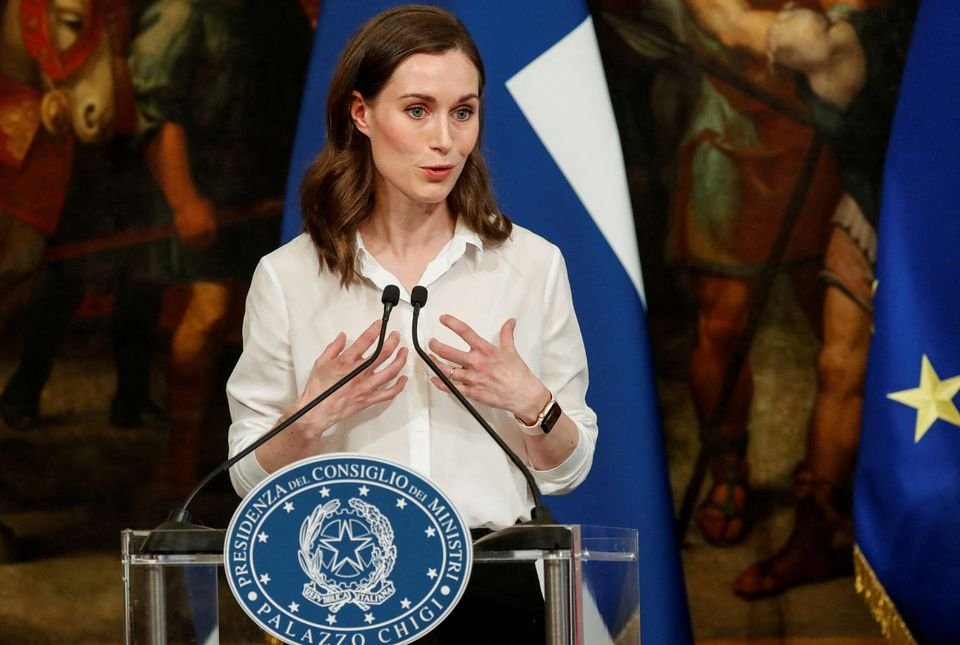 Finnish Prime Minister Sanna Marin speaks at a joint news conference with Italian Prime Minister Mario Draghi (not pictured) during her visit in Rome, Italy, May 18, 2022. (Reuters Photo)
by Reuters May 19, 2022 1:26 pm
RECOMMENDED

The NATO alliance has not expressed any interest to deploy nuclear weapons or set up permanent bases in Finland, the Finnish Prime Minister Sanna Marin told an Italian newspaper in an interview published Thursday.

"There isn't even interest (within NATO) to put nuclear weapons or bases in Finland," Marin told daily Corriere della Sera, her office said.

Finland and Sweden formally applied to join the NATO alliance on Wednesday, a decision spurred by Russia's invasion of Ukraine, but face objections from Turkey to an accession process that was originally expected to be relatively rapid.

Marin, on a visit to Rome to meet with her Italian counterpart Mario Draghi, said she believed the matter could be solved through dialogue.

"I think at this stage it is important to stay calm, to have discussions with Turkey and all other member countries, answering questions that may exist and correcting any misunderstandings," Marin told Italian daily Corriere della Sera.

Marin also said the question of NATO deploying nuclear weapons or opening bases in Finland was not part of Helsinki's membership negotiations with the Western military alliance.

Prime Minister Magdalena Andersson of neighbouring Sweden, which like Finland is applying for NATO membership, has also said her country did not want permanent NATO bases or nuclear weapons on its territory.

Turkey, a NATO member since 1952, has expressed unexpected opposition to Finnish and Swedish memberships, accusing the Nordic neighbours of harbouring individuals linked to terrorist groups. Ankara also cited the countries' arms export embargoes on Turkey after its Syria incursion in 2019.

Italy strongly supports Finland's and Sweden's application to join NATO and is willing to speed up any internal procedures for the two countries to join the alliance as soon as possible, Draghi said on Wednesday after meeting with Marin.