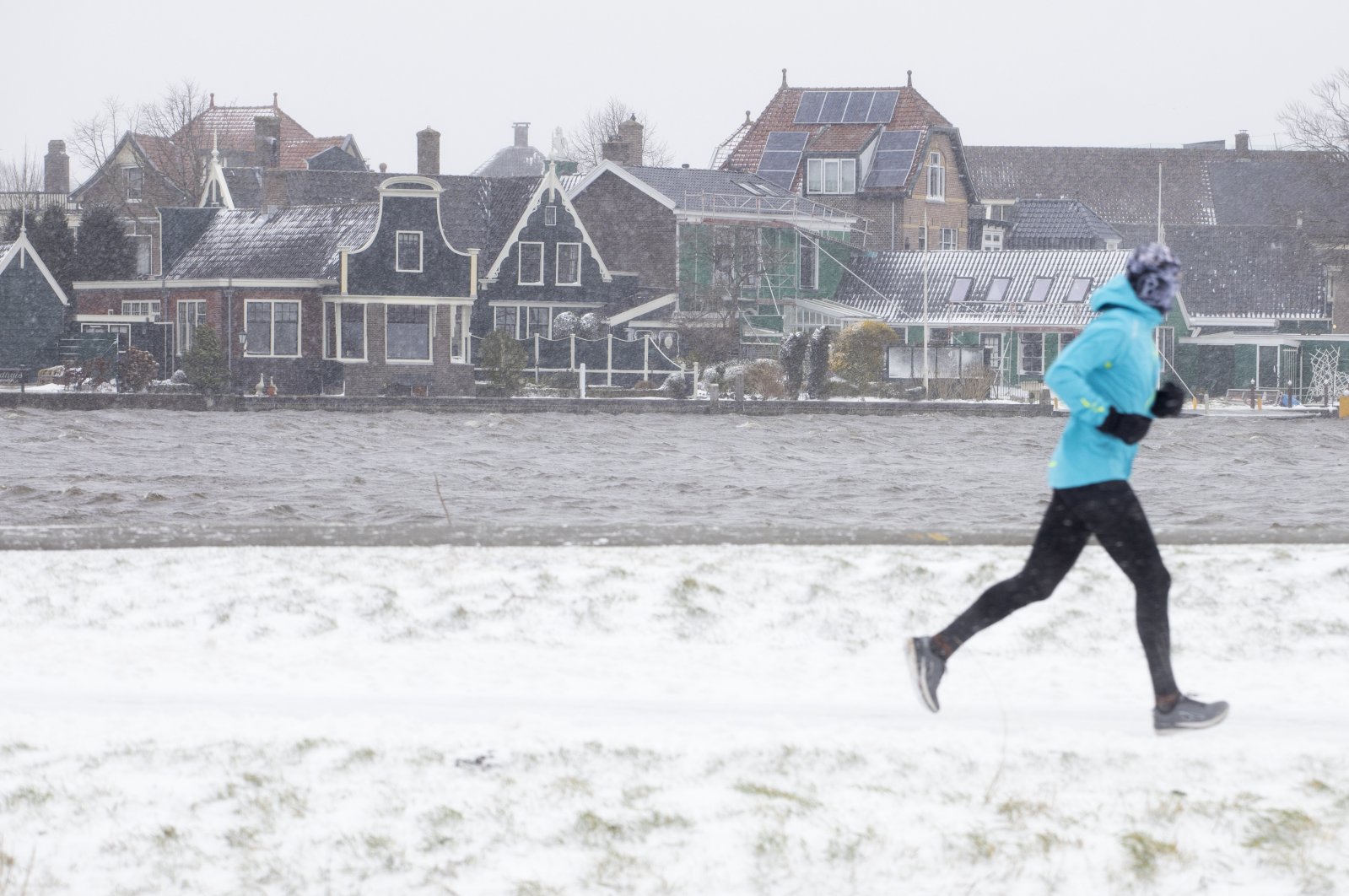 The Netherlands and parts of Germany were blanketed on Sunday by a snowstorm that disrupted planes and trains and put some coronavirus testing on hold.

Britain was also bracing for heavy snow from what Dutch meteorologists have called Storm Darcy, which is packing winds of up to 90 kilometres (55 miles) an hour.

People rushed outdoors to enjoy sledging and playing in the snow in Dutch and German cities despite the bitterly cold conditions with temperatures as low as minus 5 degrees Celsius (23 Fahrenheit). But Dutch authorities declared a rare "code red" emergency for the entire country as it was hit by its first proper snowstorm in more than a decade.

Weather forecasting website Weer.nl said that overnight a force-eight wind was measured in combination with snowfall, adding: "This officially means a snowstorm in our country."

"It is the first snowstorm in a long time: the last snowstorm took place in January 2010," it said.

Dozens of flights were delayed or cancelled at Amsterdam's Schiphol airport while Eindhoven airport in the south of the country scrapped all services. All trains were cancelled in the Netherlands, including international services to Germany. Trams were halted in Amsterdam, while a tram derailed in the snow in The Hague, an Agence France-Presse (AFP) reporter saw.

Motorists were advised to avoid travelling and more than 80 cars were reported to have skidded off the road. Most parts of the country had between 5 and 10 centimetres (2 and 4 inches) of snow but some areas received 30 centimetres, public broadcaster NOS said. The conditions were so severe that the Dutch government had closed all coronavirus testing centres for several days.

Up to 10 days of sub-zero daytime temperatures are expected in the Netherlands, raising hopes in the skating-obsessed country that canals will freeze over. Prime Minister Mark Rutte has said ice skating will be allowed if the canals freeze for the first time since 2018, but warned Dutch people to observe social distancing and to try not to fall over and end up in already overstretched hospitals.

Hopes that a 200-kilometre (125-mile) ice-skating marathon through 11 cities called the Elfstedentocht could be held for the first time since 1997 are however on ice because of coronavirus restrictions.

All four football matches in the Dutch top-flight Eredivisie on Sunday were cancelled, as was a German Bundesliga game. In Germany, snowfall caused major disruption to trains and cancellations of services between cities including Hamburg and Hanover.

Thick snow of up to 30 centimetres meanwhile disrupted road traffic, with hundreds of accidents and part of a motorway in North Rhine-Westphalia closed by police after it turned into an ice rink. Several vehicles were trapped beneath piles of snow and their owners had to dig them out with shovels, according to pictures on the Bild website.

Heavier snow of up to 40 centimetres was expected in parts of northern Germany overnight, meteorological service DWD said. Belgium, which also neighbours the Netherlands, received a light dusting of snow but was expecting a big temperature drop as the week progresses. In Britain, the Met Office issued an amber weather warning in southeast England for what local media dubbed the "Beast from the East II." The first "beast" in 2018 dumped 10 days of snow in Britain. The current warning is for roads becoming blocked by deep snow and disruptions to bus, rail and air travel.

The U.K. was "starting to see the whites of the eyes" of the storm, according to BBC forecasters, adding Manston in Kent, southeast England, had seen 14 centimetres of snow by Sunday evening. Coronavirus testing sites in two counties in eastern England were also forced to close by the weather, the BBC reported.