Northern Ireland in shock as violence breaks out after protest 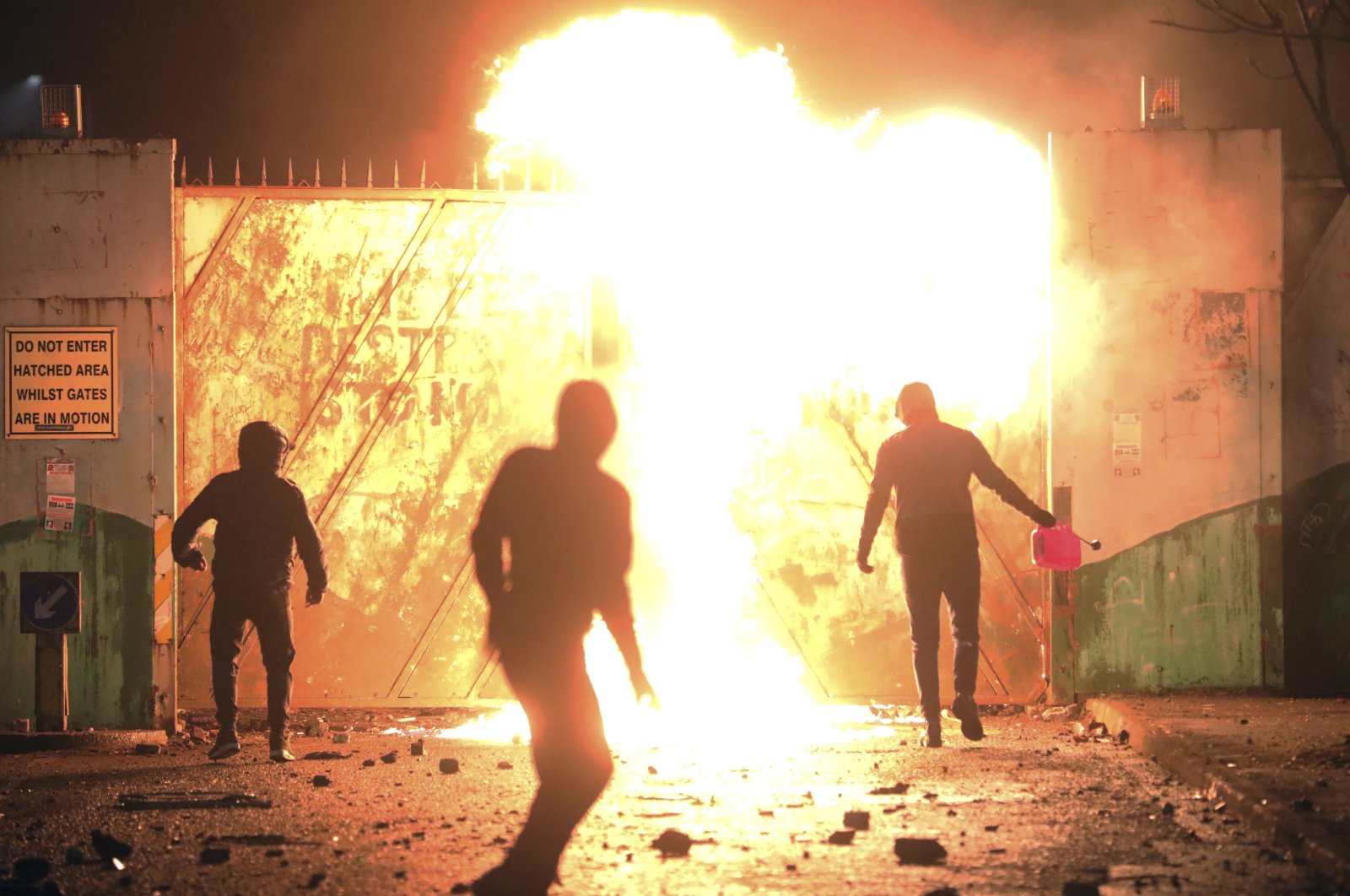 Nationalists and loyalists clash with one another at the peace wall on Lanark Way in West Belfast, Northern Ireland, April 7, 2021. (AP Photo)
by DAILY SABAH WITH AGENCIES Apr 08, 2021 10:36 am

Several nights of disturbing demonstrations escalated Wednesday in Belfast after a bus was hijacked and set on fire, as British and Irish leaders condemn the riots and call on protesters to calm down

For the fourth night in a row, Northern Ireland saw violence raging across Belfast as unionists and nationalists clashed with police and each other on Wednesday.

The riots erupted for the first time last week amid rising Brexit tensions and unionist anger over the Police Service of Northern Ireland's (PSNI) decision not to prosecute leaders of the Irish nationalist party, Sinn Fein, for allegedly violating coronavirus restrictions during the funeral of a former Irish Republica Army (IRA) leader Bobby Storey.

Youths threw projectiles and petrol bombs at police on Wednesday night in the Protestant Shankill Road area, while rioters hurled objects in both directions over the concrete "peace wall” separating the Shankill Road from a neighboring Irish nationalist area, The Associated Press (AP) reported.

"I am deeply concerned by the scenes of violence in Northern Ireland, especially attacks on PSNI, who are protecting the public and businesses, attacks on a bus driver and the assault of a journalist," Johnson wrote on Twitter. "The way to resolve differences is through dialogue, not violence or criminality."

I am deeply concerned by the scenes of violence in Northern Ireland, especially attacks on PSNI who are protecting the public and businesses, attacks on a bus driver and the assault of a journalist. The way to resolve differences is through dialogue, not violence or criminality.

Foster said: "There is no justification for violence. It is wrong and should stop."

"This is not protest. This is vandalism and attempted murder," she tweeted. "These actions do not represent unionism or loyalism. They are an embarrassment to Northern Ireland and only serve to take the focus off the real lawbreakers in Sinn Fein. My thoughts are with the bus driver."

O'Neill said that "disgraceful scenes of criminality tonight including a potentially lethal attack on bus driver and assault on journalist."

"Unequivocal condemnation needed and protests should be called off immediately – police need support, not politicking."

The recent violence, largely in pro-British loyalist areas, has flared amid rising tensions over post-Brexit trade rules for Northern Ireland and worsening relations between the parties in the Protestant-Catholic power-sharing Belfast government.

The latest disturbances followed unrest over the Easter long weekend in unionist areas in and around Belfast and Londonderry, also known as Derry, that saw cars set on fire and projectiles and gasoline bombs hurled at police officers.

Authorities have accused outlawed paramilitary groups of inciting young people to cause mayhem. Britain’s economic split from the European Union at the end of 2020 has disturbed the political balance in Northern Ireland, a part of the U.K. where some people identify as British and some as Irish.

The accord ended decades of violence involving Irish republicans, British loyalists and U.K. armed forces in which more than 3,000 people died.

But unionists say the new checks amount to a new border in the Irish Sea between Northern Ireland and the rest of the U.K. Unionists are also angry at a police decision not to prosecute Sinn Fein who attended the funeral of a former IRA commander in June.

The funeral of Storey drew a large crowd, despite coronavirus rules barring mass gatherings. The main unionist parties have demanded the resignation of Northern Ireland’s police chief over the controversy, claiming he has lost the confidence of their community.

Irish Foreign Minister Simon Coveney said on Thursday, nightly outbreaks of street violence in Northern Ireland must stop before somebody is killed, calling on the region's political and community leaders to work together to ease tension.

"This needs to stop before somebody is killed or seriously injured," Coveney told Irish national broadcaster RTE after the rioting escalated with sectarian clashes.

"These are scenes we haven't seen in Northern Ireland for a very long time, they are scenes that many people thought were consigned to history and I think there needs to be a collective effort to try to diffuse tension."

Crowds of youths in a pro-British area of Belfast set the hijacked bus on fire on a busy street at around 6 p.m. GMT on Wednesday. The driver and passengers were unharmed. Videos circulating online show a bus being pelted with petrol bombs and having its windows smashed where a crowd of people had gathered.

Infrastructure Minister Nichola Mallon described the attack on the bus as "sickening." She said, "Those attacking their own communities and their own public services are achieving nothing and if this doesn't stop now it is only a matter of time before someone is seriously injured or killed."

"I appeal for calm and call on those destroying their own communities and those fanning the flames to end this recklessness before someone is seriously hurt or killed, she added, according to remarks carried by Deutsche Presse-Agentur (dpa).

Police are advising members of the public to avoid these areas.

"We would appeal to those with influence in the area to use it to help restore calm," a PSNI statement said.

Translink Metro said it had withdrawn all services into the area until further notice due to road closures, as well as services in east Belfast. A crowd of around 500 people, most of them adults, gathered on the corner of the junction at Lanark Way as events unfolded. Further down the road, a bonfire was lit where a crowd of approximately 100 people, mostly young, were assembled.

The Stormont Assembly is set to be recalled on Thursday morning for an emergency debate following days of violence. Riots and attacks on police have taken place repeatedly throughout the last week and have now resumed after a relative lull on Tuesday.

Police were attacked during another night of violence in a number of loyalist areas on Monday. Nine officers were injured in Ballymena, taking to 41 the number injured in disorder across Northern Ireland since last Friday night. The most intense clashes on Monday were witnessed in Ballymena when nine riot police officers were injured after they intervened in an unlawful march of loyalists through the town.

During the unrest, debris, including a wheelie bin, was thrown onto the M2 motorway, forcing its closure. Disorder also flared in parts of Carrickfergus, Newtownabbey and Londonderry on Monday, with petrol bombs and other missiles thrown at officers. Children as young as 12 have been involved in some of the violence that has been witnessed in recent days. Cars, a JCB digger, a phone box and bins were set alight in the Waterside area of Londonderry on Monday.