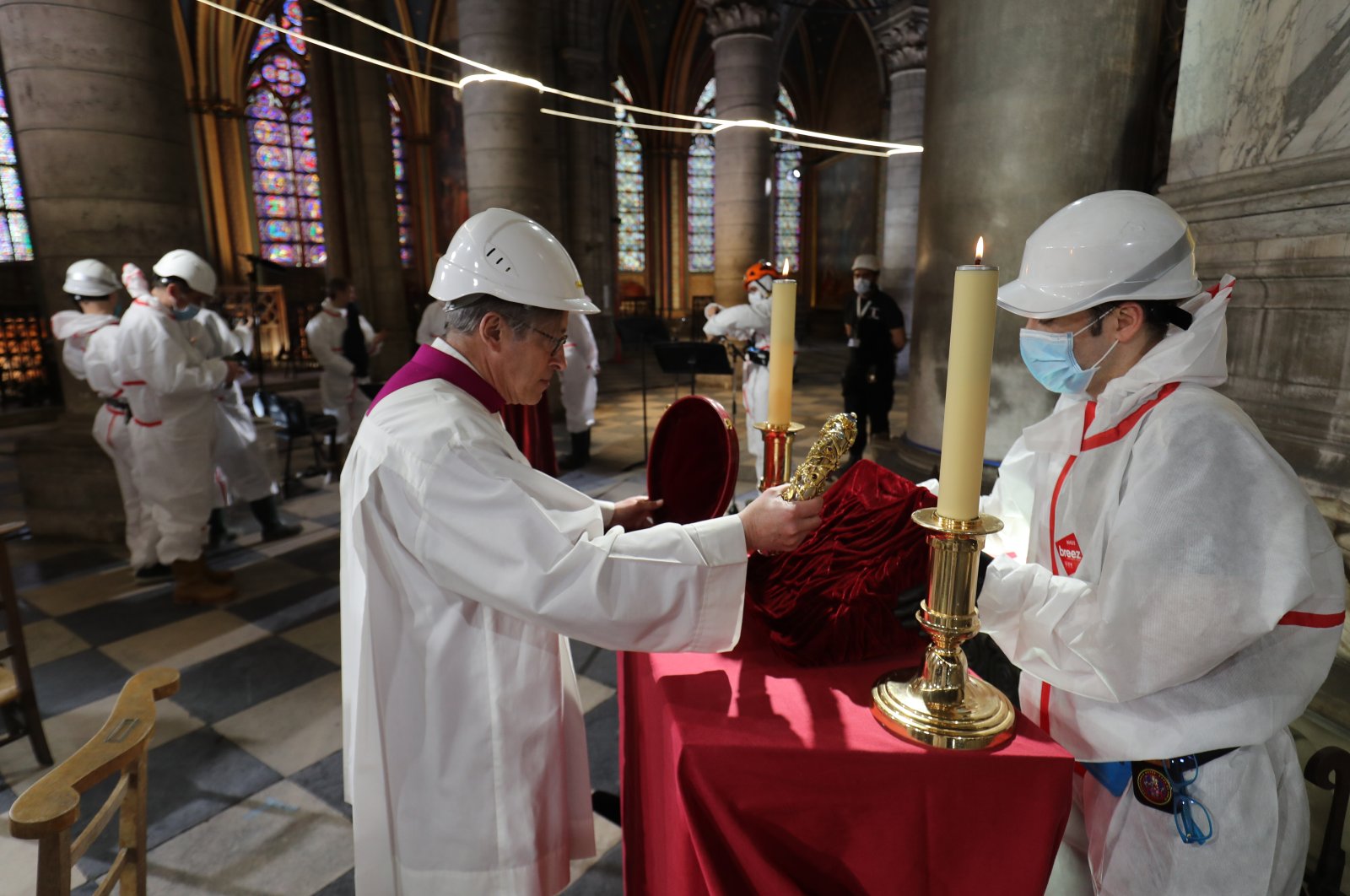 In a secured part of the Notre Dame Cathedral, its rector, Patrick Chauvet, holds the Crown of Thorns during a ceremony to celebrate Good Friday in Paris, France, April 10, 2020. (AP Photo)
by REUTERS Apr 10, 2020 5:08 pm
RECOMMENDED

Nearly a year after a fire devastated Notre Dame Cathedral in Paris, the city's Archbishop held a small ceremony there to mark Good Friday, praying that Easter's message of rebirth might bring comfort to a country stricken by the coronavirus pandemic.

Only seven people, including Paris Archbishop Michel Aupetit, attended the solemn service in the apse behind Notre Dame's Pieta due to the nationwide lockdown across France, but many more watched on their televisions.

"A year ago, this cathedral was burning, causing bewilderment," said Aupetit, after bowing before a relic of Christ's crown of thorns that was famously saved from the blaze by a fireman.

"Today we are in this half-collapsed cathedral to say that life continues."

The world had been "brought down and paralyzed by a pandemic that spreads death," Aupetit said. "As we are going to celebrate Easter, we will celebrate life which is stronger than death, love stronger than hate."

The prized golden wreath rested on a red velvet pillow placed on an altar in front of a huge golden cross, as Aupetit led the service dressed in crimson vestments.

He and his fellow clerics wore white hard hats as they entered the cathedral, much of which remains a building site, before removing them for the service.

All three were clad in white jumpsuits and boots to protect themselves against lead poisoning after the fire left traces of the metal throughout the building.

It was the second service to have been held in the Gothic church since the April 15 fire.

On June 15, 2019, a mass to commemorate the cathedral's consecration as a place of worship was held in a side-chapel of Notre Dame that had been undamaged by the blaze.

The fire destroyed the medieval cathedral's roof, toppled the spire and almost brought down the main bell towers and outer walls before firefighters brought it under control.

President Emmanuel Macron has set a target of five years for restoring Notre Dame, one of Europe's most recognizable landmarks. Restoration work has, however, been put on hold by the lockdown that began in France on March 17.