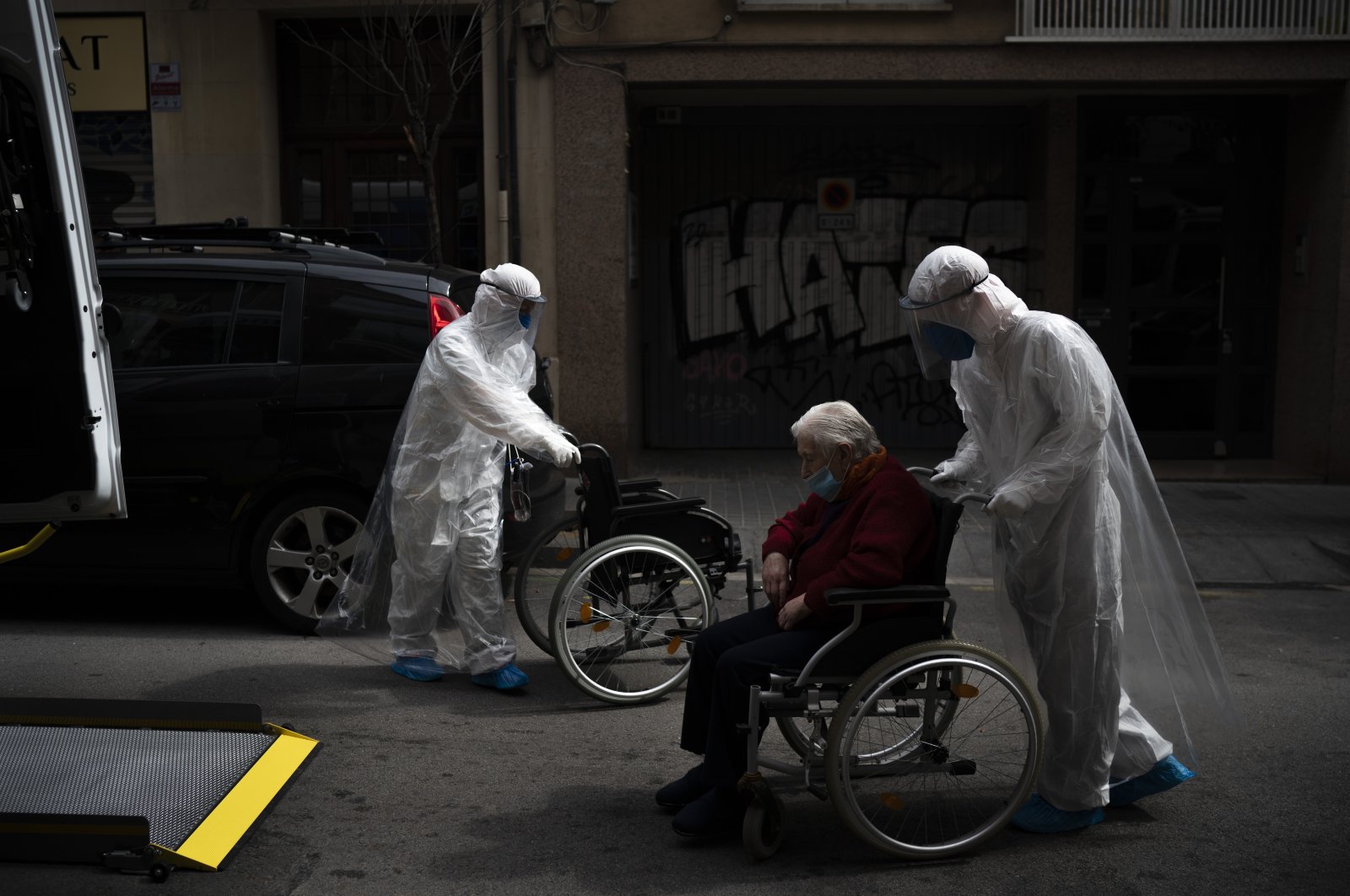 A volunteer of the Spanish NGO Open Arms pushes an elderly resident of a nursing home with coronavirus symptoms in a wheelchair to a hospital, Barcelona, Spain, April 11, 2020. (AP Photo)
by DAILY SABAH WITH AGENCIES Apr 14, 2020 2:44 pm

Nursing home deaths keep climbing in Western countries with almost half of the COVID-19 fatalities in Europe occurring in care homes, data reveals

As the global death toll from the novel coronavirus crossed the 120,000 mark on Tuesday, nursing and care homes across Europe and the United States gained much more attention in their battle to stop the spread of COVID-19 among the elderly. About half of Europe's deaths from COVID-19 appear to be happening in care homes, according to figures gathered by United Kingdom-based academics, as reported by the Guardian.

Residents in nursing homes and long-term care facilities are particularly vulnerable to COVID-19, the respiratory disease caused by the novel coronavirus, because of typically more compromised immune systems, frailty and sharing common areas. Frequent visitors and workers from outside compound the situation.

A team based at the London School of Economics estimated that the proportion of care home residents in the coronavirus-linked death toll of five European nations ranged from 42% in Belgium to 57% in Spain. The French government said over the weekend that 45% of the country's 13,832 deaths happened in care homes. In Italy, a government survey covering deaths in 10% of the nursing homes showed that 45% of all deaths could be in care homes. Belgium's health ministry data suggested 42% of the country's death toll was from care homes. Spain's regional government figures showed 57% of deaths happened in care homes.

However, in the U.K., experts believe that the British government may be underestimating care sector deaths. As of Tuesday, the government had reported 12,142 deaths in the U.K. of people with the novel coronavirus. That total, updated daily, only includes people who died in hospitals. In the U.K., the Office for National Statistics said that until April 3 just under 10% of deaths involving COVID-19 occurred outside hospitals. The head of one of Britain’s biggest nursing home operators says the number of reported coronavirus deaths among elderly residents is much higher than what has been officially reported. The government says that outbreaks of COVID-19 have been reported in one in eight U.K. care homes. But David Behan, chairman of home operator HC-One, said cases of the new coronavirus had been reported in 232 of the firm’s homes – two-thirds of the total. He says 311 residents have died of confirmed or suspected cases of COVID-19. Care homes across the country say they have struggled to get adequate protective equipment for staff and are seeing staff shortages as many workers fall ill or have to self-isolate.

In Germany, a spike in COVID-19 deaths in nursing homes has been reported in recent weeks. However, there are no official statistics for the number of COVID-19 cases in these facilities in the country. Some 800,000 people in Germany live in nursing homes.

In the U.S., more than 3,600 deaths nationwide have been linked to coronavirus outbreaks in nursing homes and long-term care facilities, an alarming rise in just the past two weeks, according to the latest count by The Associated Press (AP). Because the federal government has not been releasing a count of its own, the AP has kept its own running tally based on media reports and state health departments. The latest count of at least 3,621 deaths is up from about 450 deaths just 10 days ago. But the true toll among the 1 million mostly frail and elderly people who live in such facilities is likely much higher, experts say, because most state counts don’t include those who died without ever being tested for COVID-19. Most states provide only the total numbers of nursing home deaths and do not give details of specific outbreaks. Notable among them is the nation's leader, New York, which accounts for 1,880 nursing home deaths out of about 96,000 total residents but has so far declined to detail specific outbreaks, citing privacy concerns.

In Canada, nursing homes have seen almost half the country's total coronavirus deaths. Chief Medical Officer Theresa Tam said Monday that the country will continue to see fatalities even as the overall number of new cases slows. Prime Minister Justin Trudeau released new guidelines for long-term care homes over the weekend, including monitoring that all staff and visitors wear masks.